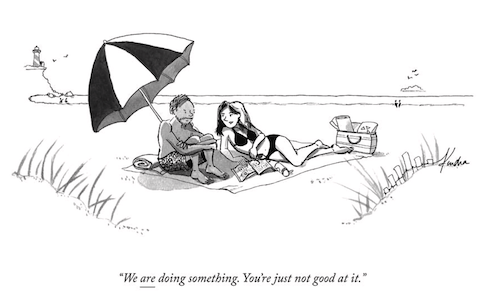 Last night, trying to fall asleep, I started thinking about some of the things I know I would enjoy doing once the pandemic’s over — but probably won’t actually do:

I have the time, and while I’m not well coordinated, there is nothing physically stopping me (at least post-pandemic) from doing all these things. This is not a terribly ambitious or costly or onerous “bucket list”. I know they’d be fun and rewarding. So why will I probably never “get around” to doing these things?

Recently I’ve expressed my views on why we do what we do each moment (our biological and cultural conditioning, in the context the circumstances of the moment). We have no choice. But how can this explain why we don’t do what we don’t do?

I’ve tried to invoke Pollard’s Law of Human Behaviour to explain this, but it’s not very compelling. I do things that are dead easy but not much fun, instead of things that are pretty easy and great fun. What’s that about?

Our biological conditioning is all about maximizing pleasure and minimizing pain. It impels us to do things (eating, sex, sleeping) that are biologically associated with pleasure, and to take actions (jumping away from oncoming traffic, defending a dependant from attack) that it associates with pain avoidance.

So how might this understanding be applied to explain our tendency to procrastinate, our apparent ‘laziness’ and lack of perseverance, persistence and self-discipline, and why we might skip an event we know we would really enjoy if we participated in it, and instead do ‘nothing’?

Our conditioned preferences and propensities vary from person to person, but there seems to be a universal human tendency to do what is seen to be urgent rather than what is seen to be important. Vacuuming the house will be more urgent to some than others (and some might actually consider it enjoyable, rather than just something nice to check off the list). And what is fun for some (skydiving) is horror for others.

But in a subtler sense, once the “urgent” things are done, there is, for each of us, I think, a balancing point in our conditioning between doing something that’s easy and doing something that’s fun. I don’t much like to travel (because in the words of the Procol Harum song, when I’m travelling, I tend to “only see how far I am from home”). But when I do travel, I often enjoy it immensely, and tell myself I should do it more.

For each of us, I’m guessing, there is a point at which doing something that is not urgent is “more trouble than it’s worth”. That is, in the unconscious conditioned calculus of each character, a determination is made whether or not to do something, and then the conscious mind is left to try to rationalize why it made that decision.

And for some, as the cartoon above depicts, doing “nothing” is excruciating; for them, doing something — anything — is always urgent. This is particularly sad to see in retired males (their lives lose their sense of purpose) and others afflicted with the endemic imaginative poverty of our modern culture.

Our biological conditioning has evolved to keep us safe, healthy, in balance with other creatures in our ecosystems, and happy enough to want to continue living and procreating. Our cultural conditioning has evolved in part to optimize the collective well-being of the tribe, family, and community, and in part to ensure we fit in well with our “group”. In much of our contact with others, we condition each other, diminishing the differences between us.

But in the process, we have created a “fearful” world. Our proclivity to constantly identify and do what’s urgent has created an arms race for our attention, and there is no better way to get attention (“The sky is falling!”) than to incite fear (and/or anger, its mask). So perhaps to some extent we prefer to do nothing (or something easy), rather than something fun, because our modern, made-terrible world has become so exhausting. The young of all species seem to be more inclined to want to play than their elders, perhaps because of this growing exhaustion. The point of “more trouble than it’s worth” is easier to reach when we’re low on energy.

As I’ve gotten older, I’ve found doing “nothing” (just being in the moment, noticing, paying attention to everything around me) to be more fun. Maybe that’s an exhaustion (or fear) trade-off, but maybe it’s just because, with fewer urgent distractions, I’ve actually started noticing more.

So, of course, I could pull out my synth, and find that set of chord sequences I started playing with a while ago, and compose something new from them. That would be enormous fun.

Or I could work on a short story that builds on one of my best-received stories, since I have some ideas that might make an enjoyable sequel — that would be harder (fiction is always more challenging for me to write than non-fiction), but it would likely be worth the effort in terms of personal satisfaction both while working on it and afterwards.

Or I could just sit here and notice, with endless and astonishing wonder, the colours and shading that lights of various types, natural and human-made, cast on the walls and other items in this room, and how these raspberries, that I had no choice but to buy and now eat, taste, and how this new Taylor Swift song can’t help but make me smile even though I know it wasn’t intended to be taken the way I’m taking it, and how the various pieces of the song fit together so cleverly, and its deliberately ambiguous words (“Forever is the sweetest con.”).

And how the scent of the air by the open window carries with it a million crafted and uncrafted messages that I somehow unconsciously recognize and know and respond to even though they will never even register let alone be recognized or understood by this arrogant, supposedly “conscious” “me”.

Every second in this amorphous, forever-stranger body, a trillion things are being done. None of them entails any choice whatsoever, any volition. There is never a choice. What I am not doing is not being done because my conditioning, in the context of the current situation (which includes how energized or exhausted I feel), has already “decided” that something else (which might be seen as “doing nothing”) is going to be done instead. “I” am not part of that process; “my” only role is to try to make sense of why and how that “decision” was made. But it’s quite possible that, not only does that decision not make sense to “me”, but that there was no “sense-making” involved in the “decision”. There may just not be any “reason” that “I” can fathom for it; it may just be, unsatisfactorily to “me”, what is happening.

“I” have been trying recently to be more attentive, to notice more instead of spending so much of my life preoccupied with my thoughts and feelings and what’s going on inside me. But we can’t even choose whether or not to see, to notice, to pay attention. Whether “I” will succeed in that aspiration of attentiveness is not within “my” control either. If there is an apparent shift to more attentiveness, “I” will be sure, however, to take unwarranted credit for it. And if there is no such shift, “I” may either blame my own propensity for distraction, or blame some outside force for my inattention — or, in my lack of attentiveness, “I” may not even notice.

We labour under an error. We act in the belief that we are all of one piece, but we are able to cope with things only because we are a succession of fragments. We cannot shake off the sense that we are enduring selves, and yet we know we are not.

This statement goes beyond a declaration of the absence of free will, and declares the absence of a real self. With no “me” to make any decision, there cannot be any “real” decisions about what will apparently be done, or not done. Carrying this argument to its (ironically) “logical” conclusion, there is no time in which any decisions could be made anyway. There are things apparently happening, some of which look like consequences or results of other things happening, but there is in fact no causality, no sequence, no “all of one piece” continuity, so there are no decisions, and there is nothing “really” happening.

It’s all just a wondrous light show, within which apparent human bodies imagine a “me” seemingly making decisions about what will happen “next”. When there is no “next”. We just can’t take off the “me” headgear to see that, since “we” are that headgear.

In the world outside the headgear, beyond the fiction of “me”, and time, and space, and real things, and things really happening, there is no “why”. When everything else is seen as just appearance, or illusion, that’s the only explanation that, in some inexplicable, intuitive way, “makes sense”. In that light, effortless, place that “just is”, the question why no longer arises. Science, stuck with us inside the headgear, can get us close to that, can hint at it, point to it with mischievous unanswerable questions, but not all the way.

And there is no why for that, either.