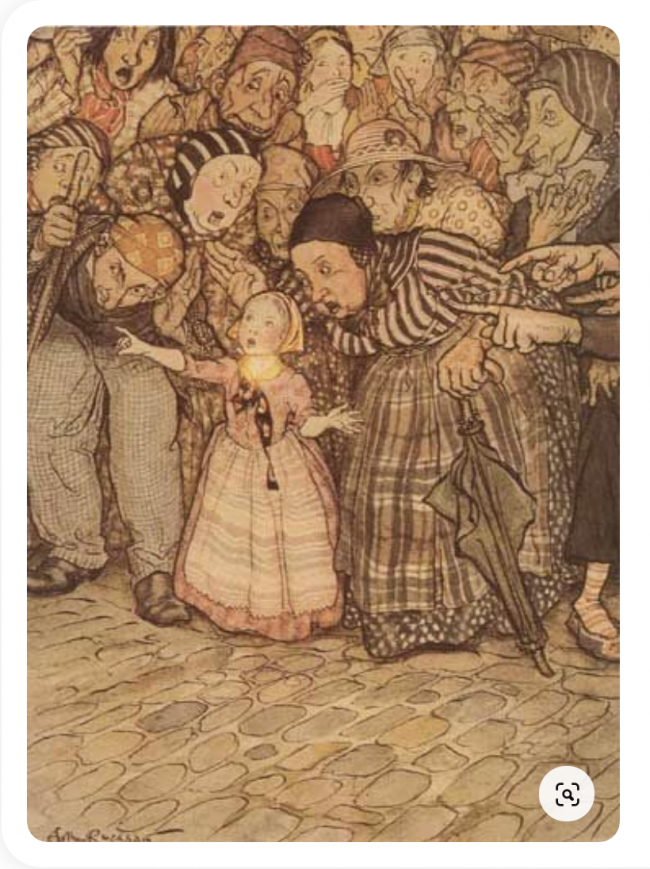 Illustration by Arthur Rackham of an early version of the fairy tale. Public domain.

OK, I admit that the fairy tale The Emperor’s New Clothes (which can be found in multiple cultures and predates by centuries the Hans Christian Andersen version) has kind of been done to death. The Emperor’s nudity has been used as a metaphor for many kinds of arrogant foolishness, gullibility and unwarranted deference to “superiors” and “experts”.

Yet today, as I was thinking about nothing, it occurred to me that the messengers of radical non-duality are very much like the little girl (or boy, in some versions) who shouts out (futilely, and being immediately shushed by all around) the obvious news that the strutting Emperor is ridiculously naked.

This time around we have three swindler-weavers of false, invisible cloth:

For an Emperor who desperately wants to believe that there is hope for this traumatized mess of a species totally dependent on a civilization culture that has irrevocably wrecked the living systems on which all life depends, these are welcome guests indeed. The weavers’ collective cheer is “We can do it!” That’s a Royal “We” of course, this being an Emperor and all.

And guess who the Emperor is? “We” are! We rule the Empirical prison of our selfhood, unopposed except by our own occasional doubts, and cheered on by (most of) the other Emperors in their lonely nearby apparent Empires. We gladly don the robes of the swindler-weavers, desperate to believe that, swathed in their assurances, We can indeed do anything.

Except there’s that annoying little child, in the midst of all the Emperors all screaming “We can do it!” And the child is just quietly, and quizzically, saying, over and over:

Where did the little brat get such a heretical idea?

Well, perhaps from quantum science and astrophysics, where new discoveries suggest that the space and time on which all science is built, actually doesn’t exist, and these are just constructs of the mind, ideas. The deeper we probe into our models of reality, the more we find things that don’t fit, that don’t even begin to fit with our models, our theories, our maps purporting, absurdly, to be closer and closer to becoming the territory.

Or perhaps it comes from neuroscience, the cognitive and behavioural sciences, which have pretty much eviscerated the idea that the ‘self’ and its ‘consciousness’ exist other than as a concept in the brain, a place-holder to hold together the brain’s model of what seems to be, based on all the sensory data it tries to process. And that we have no free will, no control over the bodies we presume to inhabit. That our bodies are simply acting out responses based completely on our biological and cultural conditioning, given the circumstances of the moment, and our ‘conscious selves’ merely attempt to rationalize what was done as being ‘our’ decisions, after the fact.

Or maybe it comes from evolutionary biology, which has shown compellingly that the brain is utterly unlike even the most complex imaginable computing and storing machine, and that the ‘mind’ is a fiction. That the brain is, in fact, a glorified feature detection system that evolved in some creatures to protect the collective cells and organs of the body, that ludicrously then got the idea that it was in charge.

Wherever the precocious, protesting child’s claim that “There is no We” came from, it is, in one sentence, the message of radical non-duality. Everything is just as it apparently is, already. There is no space, no time, no thing, no one, nothing separate, no meaning, no purpose, nothing known or needed. No We. The unbearable lightness of nothing, being everything, just, apparently, being this.

Just as in the fairy tale, the weavers don’t really care whether you can hear the child’s absurd statement. Their reputations are well-established, secure, reinforced by all the other weavers in their guilds. The crowd doesn’t hear the child, and the few that can hear over the din of the collective shouting of “We can do it!” think the child must be disturbed, as what it says makes no sense.

The weavers have been around before. They were around to support the promise and validity of phrenology, of humours, vapours and miasma, of demonic possession, of trephination and lobotomy, of alchemy, of bleeding with leeches, of the burning of witches, of the geocentric universe, of the crusades and the inquisition. When their weavings come unstrung and fall out of favour, they bid a hasty retreat, wait a short while for the people to forget, and then return with new promises, new methods and new raiments. Now, CBT, the DSM and Mindfulness™ are part of their accoutrements.

But this might be their last visit, at least for a few millennia, or even many millennia. Their chants and assurances now ring a bit hollow. The people, and the Emperor, still want to believe, but there are gnawing doubts. The records suggest they’ve been fooled by these weavers before.

Just because everyone has been convinced they see the hallucination, the clothes the Emperor just might be wearing, or that mirage ahead in the now seemingly-endless desert, doesn’t mean it’s real.

1 Response to The Emperor’s New Weavers