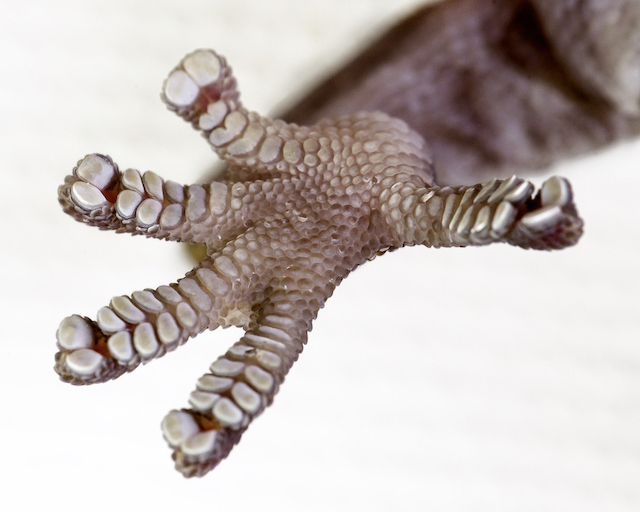 This is a brief introduction to the subject of biomimicry, a concept developed by Janine Benyus twenty years ago. I’m using it to prompt an upcoming discussion by a Teal business group on how self-managed businesses might draw on natural processes to improve their own, and what an OD program about biomimicry might look like.

For almost 4 billion years, 100 million species, our biological mentors on the land, in the sea and air, and even underground — have evolved chemical, technological and engineering adaptations to deal with problems critical to their survival, using abundant, natural, local materials. Biomimicry (aka biomimetics) is the study and application of these adaptations to human problems.

There are lots of other examples. Airplane shape, wings and tails. Structure of skulls of birds used to design strong, lightweight materials. Velcro, based on burrs, and other non-chemical adhesives based on geckos’ feet (pictured above). Bullet trains and boxy cars modelled on bird and fish body aerodynamics. Beehives inspiring hexagonal structures. Mosquitos inspiring new hypodermic designs. Sonar. Mycorrhizal (plant/fungus) associations for information gathering and communication. Bird and bee navigation. Did you know swimsuits with textiles that mimic the low-friction surfaces of sharkskin are actually banned from professional swimming competitions?

The biomimicry website provides the first chapter of Janine’s book and a lot more videos on the subject.

The above are mostly product examples. Biomimicry can also be used to draw on natural solutions to improve services and organizational processes. For example, some creatures, particularly females, instinctively make sounds of a type and pitch that has a calming effect on babies and even peers in stressful situations. Much study is being made of bird and bee navigation systems, and pheromones that have profound effects on behaviour of many creatures of the same species, and even on their predators and prey.

In biomimicry, the question to ask is always: How does nature deal with this problem?

One of the problems we face when trying to apply biomimicry beyond the mysterious physical/structural, chemical and technological ways nature solves problems, is anthropomorphizing. Particularly when we look at animal behaviour, we expect and look for animals to behave the way we do, and ascribe human-like causes to their behaviour.

So, for example, we are prone to saying that wild animals live in strict hierarchies, with the “alphas” dominating the rest, when closer study shows this is rare: the leaders of most animal groups are selected by the groups themselves, and leadership changes often and generally entails more work and hardship than benefits. We ascribe individualistic, “selfish” behaviours and conflicts to wild creatures when most of their behaviours are collective and done for the benefit of the whole group. We imagine wild creatures living perilous, anxious “dog eat dog” lives “red in teeth and claw”, when the natural state of most wild creatures varies between equanimity and enthusiasm, with the fight/flight/ freeze moments being extremely rare. We love to say that many animals “mate for life” when very few actually do.

But if we can get past the anthropomorphizing, there’s lots to learn about how animals live and ‘work’ together, collaboratively and cooperatively. The first thing to witness is their capacity for paying attention. They learn by watching others — what foods their parents eat and which they avoid, how to do just about anything more effectively, and even how to overcome those annoying squirrel baffles. They use workarounds and adaptations to adjust their behaviours to better suit their current environment and situation, instead of brute force trying to change the environment and situation to suit them.

Workarounds are, in fact, the way most human activity in larger workplaces actually gets done. So a computer system that, in the interest of top down command and control, blocks the front-line service person from doing what needs to be done to reasonably satisfy the customer (be that a refund, price reduction, replacement or credit), is preventing the precise workarounds that are essential to customer satisfaction. In a healthy workplace, everyone is free and empowered to do whatever it takes to make the customer happy, even if that means tossing out the SOP manual. Block the workarounds and not only is the customer enraged, the employee’s morale is battered as well. Everyone loses, just because the system is inflexible.

We can use a process called “cultural anthropology” to just watch and notice where the “wear patterns”, awkward (and sometimes ingenious) workarounds, and other signs of dysfunction and adaptation are, and then institute processes to unclog the former and enable and encourage the latter.

There’s lots of other lessons to learn from studying wild animal behaviour as well. The only limits on our capacity to improve our organizations’ processes to everyone’s benefit, are our attention, our imagination, and a willingness to let go of (illusory) control and let the principles of self-organization, curiosity, and trust that everyone’s doing their best, determine what gets done and how. But few organizations (especially large ones) are willing to do so. Far too many have bought the propaganda of patriarchy, coercion, control, competition and rigidity. Nature knows better.