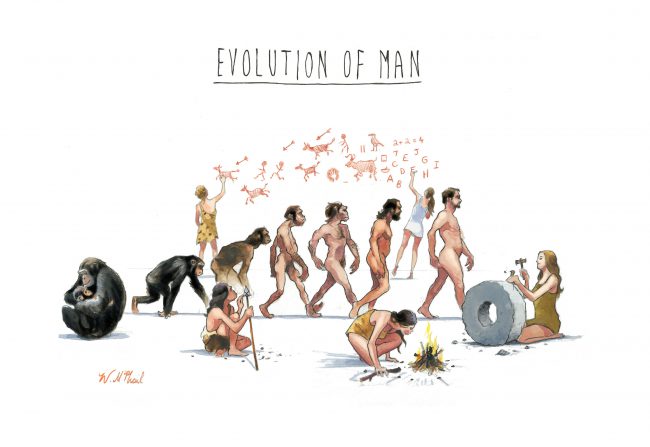 One of my favourite New Yorker cartoonists, Edinburgh’s Will McPhail, has published his first graphic novel. It’s just out, and it’s called In. And it’s astonishing. It’s unlike anything I’ve ever read before.

Like many graphic novels since the genre began, this book is not just a graphic novel. It might be described as an art exhibition with an accompanying story. Imagine if Vincent van Gogh had written a blog entry, or a poem, to accompany Starry Night.

The book contains a host of ‘chapters’ in the life of Nick, a scarily-familiar, slightly shy white guy who’s completely out of touch with his emotions and neither capable of, nor, at first, interested in, talking about them. What we get, instead of just the balloons of what the characters are saying, is extra text in each panel of what Nick is thinking and feeling (but not saying). It’s an internal monologue that I’m sure many, many male readers, and the women who know them, will relate to.

In interviews, Will says that the Nick character is semi-autobiographical, but that the events and other characters are just invented. This is a story-telling approach that seems to work well — all the characters ring true, and the dialogue is natural but still snappy and often very funny.

The ‘story’ chapters are all in black and white. But interspersed are panels in vibrant colour, wordless and mysterious, dreamlike, portraying what would seem to be the full-bodied inner life of Nick and occasionally the other characters in the book. They work on a completely different level to the ‘story’ pages, and strike the brain and the heart (and perhaps the amygdala, if you believe in that sort of thing) of the reader in very different ways.

The coloured pages stand alone, sometimes gloriously, as works of art in their own right, and I could imagine hanging some of them on my wall. Perhaps where people who know me, but don’t really know me, could see them when they visit. Perhaps on my bathroom wall near the mirror, where they could remind me who I really am when I get up in the morning, and have forgotten.

The characters include Nick’s family members (all more self-aware than he is, including his very young nephew); Nick’s new girlfriend; and a host of baristas. They go through some familiar crises. 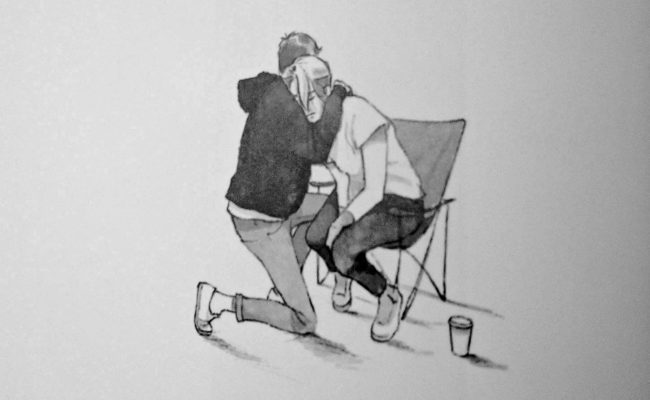 But then Will hits you with the coloured art panels, and suddenly you’re relating to Nick, and the other characters, and perhaps yourself, in a very different way, the way you relate to a beloved work of art, music or literature. 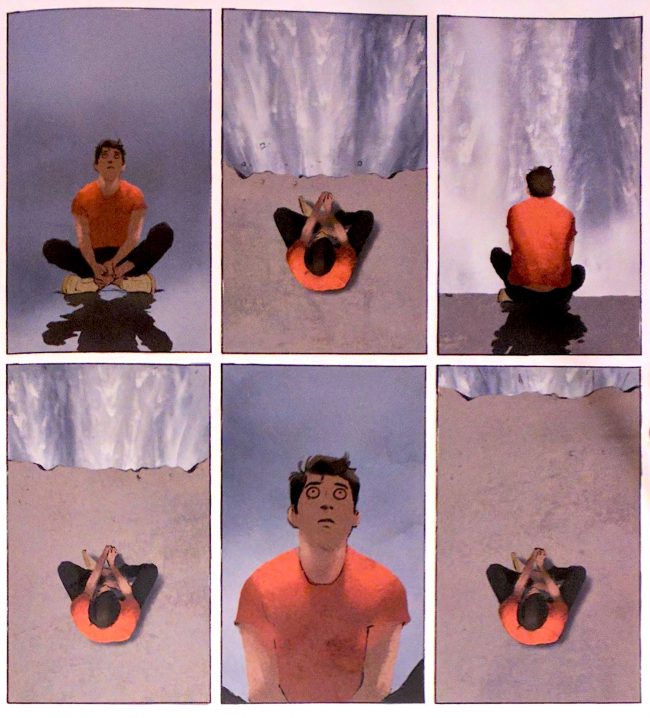 This got me thinking about what art really is. I’d always thought of culture as the shared beliefs, sensibilities and behaviours of a group of people, and art as the ways in which that culture is expressed.

But of course art is far more than that, and to the extent it is usually an individual, sometimes even lonely, undertaking, it naturally conveys more than any group’s shared beliefs and sensibilities (how they, familiarly, see and make sense of the world). Rather, it conveys how the artist sees the world both through the eyes of the artist’s conditioning culture, and through the artist’s own, very personal lens — perspectives that can be jarringly incongruent.

And that’s how the ‘story’ chapters of the book (the world seen through the cultural lens), banging up against the coloured panels (the world seen from the character’s own, hyper-personal, unfiltered lens), struck me. Intimate, somewhat irreconcilable and jarring (in a necessary, shake-you-up, Starry Night kind of way), and absolutely raw.

The story has some hilarious and moving moments that made me laugh out loud, and it has its moments of ‘ordinary’, commonplace tragedy. But it was the coloured panels, not the story chapters, that had me weeping like a child, like I have not cried in as long as I can remember. And this happened, spontaneously, all three times I read the book.

Like all good art, In made me envious of the artist’s ability to convey so much so powerfully, with words but also, more importantly and viscerally, without words. I ache to be able to ‘say’ these things without the flatness and enormous effort and imprecision of language. I want to give a copy of this book to everyone who has ever cared about me, or might one day in the future, to let them know who I was, and am, instead of having to rely on my blog, which cannot hope to convey a fraction of as much truth, and which does so far less articulately.

On another level, like many of his cartoons, Will’s book is a paean to women, their grace, their groundedness, their capacity to understand, and to give, and to carry on in spite of everything. I try to do that with the female characters in my short stories, but Will does it consistently, pointedly, and accurately. 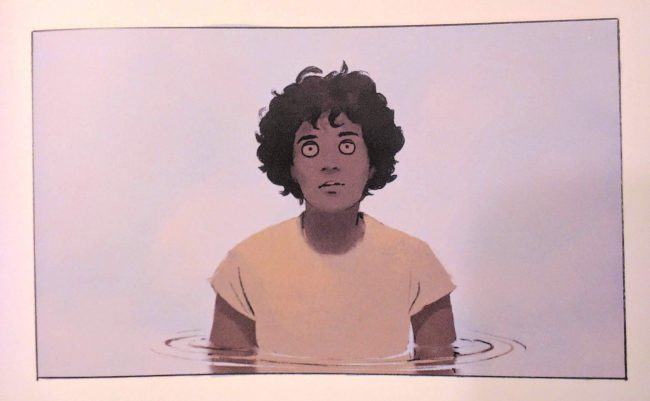 When I’d finished the book (all three times, so far) I wanted there to be a sequel about Wren, Nick’s remarkable, patient girlfriend. I suspect it would be a huge challenge for Will to produce one, but I suppose he could find a woman collaborator, and pull it off. Wren is so real, I want to know more about her!

I hope I can get a discount on In with a bulk order. It’s going to end up in the homes of a lot of people I know.

A couple more of my favourite Will cartoons below. 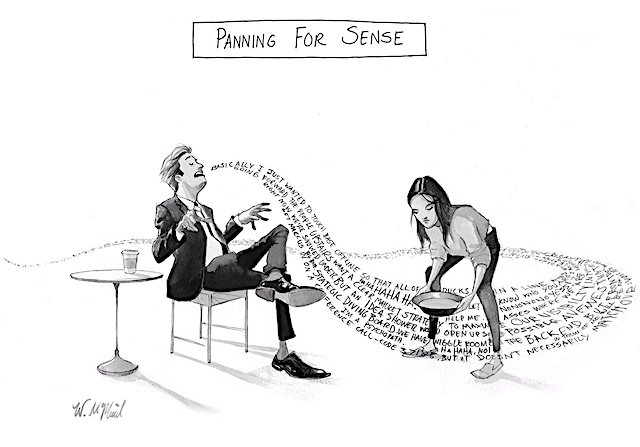 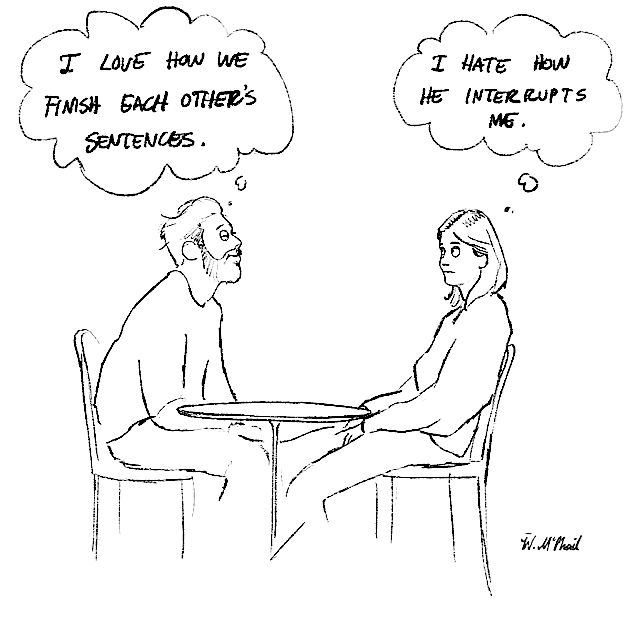