Characteristics of an Unhealthy Culture 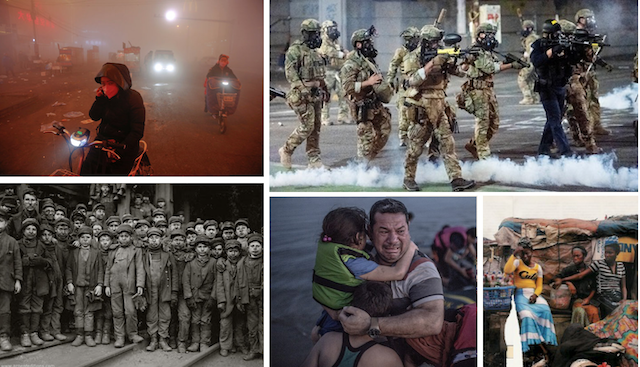 A while back, Tema Okun published (and continues to curate) a fascinating list of the qualities of a White Supremacist Culture. When I read it, I realized that she was at the same time identifying the characteristics of an unhealthy culture.

If you study past collapsed cultures, they had many of these attributes. Drawing on Tema’s list, here’s my list of the qualities of an unhealthy culture headed for inevitable collapse:

Looking at our current civilization culture, the diagnosis would appear to be grim.

How did we get to this stage? My sense is that our collective conditioning over the past few millennia has inevitably led to this, the result of billions of people doing their best to make things better for themselves and those they love. We can rant and rave all we want about all of these emergent, unhealthy qualities of our civilization, but it’s sheer hubris to think we can ‘reform’ it.

This hasn’t happened because we were stupid, or evil, or allowed evil people to come into power. The human experiment on this planet has been a fascinating one, but we didn’t do anything wrong. The way it, and we, have evolved couldn’t have taken any other course. All systems, and all civilizations, do and must eventually crash, despite what those espousing the myth of progress would like us to believe.

This — the way we live now — isn’t how humans, or any creatures, are meant to live. When I say ‘meant’ I’m referring to how we are biologically made up. Like our cousins the bonobos, we emerged as a species suited to a slow, peaceful, low-stress, uncrowded existence. For whatever reason, probably involuntarily, we migrated to very different, hostile environments, and used our large mental capacity to try to control and manage in these new environments. But the systems we created to do this controlling and managing were maladaptive and unnatural, and they have been continually and inevitably coming apart since we created them. And now, as David Ehrenfeld predicted, they are collapsing on a massive scale.

These systems, and this civilization culture, no longer serve us. We are right to be fearful of the struggle and hardship that collapse is already starting to impose on many of us, but we should not mourn this culture’s collapse.

We cannot know whether there will be any human survivors as this collapse accelerates through the rest of the century. But just as our species’ emergence came about as an accident — the aftermath of the fifth great extinction 65 million years ago — we cannot even guess what will emerge from the current sixth great extinction, the one our species, in its ‘wisdom’, unleashed a mere blink in time ago. All we can know is that, if future cultures have many of the characteristics of the list above, nature will not allow them to continue for long.

Thanks to Kavana Tree Bressen for pointing me to Tema’s site.

4 Responses to Characteristics of an Unhealthy Culture