Imagining the End of the Journey 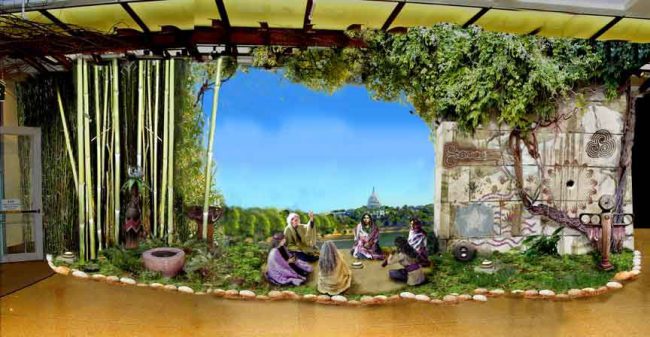 council of clan mothers in post-civ culture; diorama from Afterculture

In a new article, Rhyd Wildermuth acknowledges that he has had to deal with a lot in his life, from horrific precarity as a child to brutal abuse as a young adult. He writes about the importance of self-awareness, of understanding one’s own life, beliefs, behaviours and motivations, and imagining a better future as a means of taking “agency” over one’s life, and hence becoming “unstuck”.

As someone who has written ad nauseam about our culture’s imaginative poverty, I’m of course on board with that. To me, Rhyd’s key insight is:

It’s much easier to imagine the end than to try to imagine how we get to that end.

Where we get mired down in our thinking about the predicaments we face in this unfathomably complex world, I think, is: How do we get there (to the desired end state) from here? And when there’s no clear path, we are easily tempted (and encouraged by adversaries) to conclude there is no path and that our current dark trajectory is inevitable, and that our present, tragic, limiting way of living is the only way to live.

One of the fundamental tools of business planning work is the use of “future states”. This entails briefly setting aside assumptions and concerns about the “present state” and what’s wrong with it, and instead imagining a much better “future state”, without worrying about how or even whether it could be achieved.

There are some who say that that’s all that needs to be done, or really can be done — that the popular bullshit of “strategic planning” towards “achieving” that future state is pure hubris, because we control almost none of the variables to its achievement.

The idea is that, instead of “planning”, we just keep focusing on that future state, and basically trust (I use that word hesitantly) that keeping it in the front or back of our mind is going to influence our conditioning (and what happens as a result) sufficiently that we will tend to move towards, rather than away from, that future state. I confess that may be an article of faith, but it seems intuitively sensible, and it certainly can’t hurt. “Keep your eyes on the prize”, and all that shit.

In “scenario planning” work, you try to be indifferent about future states, and rather than imagining the one you’d like to be living in, you identify the four most probable, distinct future states, and then, studying the variables that would lead to each, you “map” the terrain and ascertain the consequences of, and necessary preparations for, each of those four distinct futures (ideally on the consultant’s notorious “2-by-2” matrix).

It’s an interesting theory, but it simply doesn’t work. The problem is that we cannot be indifferent to potential future states, and we can’t be objective or rigorous about their likelihood or the conditions that could give rise to them — we are too ignorant of the infinitely many variables that could be in play (eg “black swan” events like CoVid-19), too lacking in imaginative capacity to imagine futures very different from the current state, and too invested in our beliefs and preferences, which we are inclined to mistake for truths.

We believe what we want to believe, regardless of its relation to verifiable truth. And we really can’t imagine a world so different from today’s that we have no guideposts or constants to lean on in constructing it. We think, and imagine, by analogy to what we already know — or at least what we think we know. Our cognitive biases are severe and inescapable, and our imaginations pathetically limited.

This is perhaps why SciFi is littered with stories about humanoids on other planets, which is the most unlikely and preposterous precept for a future state story one could employ. But it’s all we have to draw on. No matter that scientist Stephen J Gould demonstrated that the chances of the evolution of vertebrates on a planet with an evolving atmosphere and biosphere like ours was no more than one in sixty million!

We probably wouldn’t like a SciFi story that wasn’t based on humanoids — we just couldn’t relate to it. We really are not a very imaginative species.

Where I disagree with Rhyd is over the issue of “agency” — about whether, having imagined a desired, very different “future state”, and acquired sufficient self-awareness to understand our current predicament and our current beliefs, behaviours and conditioning, we can use this to “take agency” to move toward that future state.

Rhyd uses the example of capitalism, suggesting that if we imagine an economic system that actually works for the benefit of all, and start to build it, then that’s more effective than trying to map a path to reform the existing, entrenched, self-reinforcing capitalist system. (Yeah, I know, cue the Bucky Fuller clichés.)

Or perhaps, on a more personal level, if we’re living in a situation of horrific precarity or abuse, it might make more sense to imagine living in a healthy situation, and then let that ‘vision’ guide us towards achieving it, instead of trying to plot a step-by-step path through and out of  the brambles of our terrible current state.

Anything that helps us imagine that desirable end (eg the story of a close friend who had successfully escaped from an abusive relationship; or a visit to an intentional community that’s based on income-sharing rather than capitalism) would presumably help.

There are, of course imaginings that would not help, or which might even worsen, one’s situation. If one is dealing with grinding poverty, imagining being surrounded by staggering wealth is unlikely to prove useful. Nor is imagining the Rapture, or a visit by aliens, reversing climate and ecological collapse. Future state stories have their limitations, especially when they’re fairy stories.

My sense is that if the problem one is facing is local and personal, a future state story that imagines that problem to no longer exist could be useful. If the predicament is large-scale and systemic, imaging a future where it no longer exists might just be wishful thinking, and of little or no use to anyone (except perhaps writers of fiction and self-help books).

How do I reconcile my sense that envisioning a future that is better than today’s can be useful, with my belief that we have absolutely no free will? The same way I can reconcile the sudden and radical changes in my own worldview, and in my subsequent behaviours, over the past decade: Something came along, serendipitously, that challenged my way of thinking at a time I was ‘ready’ for it, and it changed my conditioned behaviour. I’m still, and always, acting out my conditioning; it’s just that that conditioning shifted due to some factor beyond my control.

Likewise, you telling someone a story about a better future, one without a problem they are grappling with, might just shift their conditioned behaviour to escape that problem, which wouldn’t likely have occurred without that provocative story — a story of what was possible, which previous to that had been unimaginable to them.

Not because they now had “agency” — they never had that. But because sometimes our imaginations need a little help to guide us towards a better way of coping with a problem. As Rhyd puts it: “You cannot become someone else until you can imagine yourself otherwise.”

There are many situations — predicaments rather than problems — where our imaginations are of little or no use. Quite a few of my fellow collapsnik writers (John Michael Greer, Paul Kingsnorth, Michael Dowd) find solace, as Rhyd does, in traditional religious or spiritual beliefs, in coping with the grim reality of these predicaments.

I confess I don’t share, or even really understand, these beliefs. I take no stock in the existence of any higher power that might, in some way or other, look after us when we cannot look after ourselves, or the existence of some ancient or indigenous wisdom about how to cope with the dread and grief of a seemingly ghastly and unbearable future. I am, as the song Doubting Thomas puts it, “of little faith”.

As I have often written: If we can’t imagine, we can do anything. The atrocities of war, and the abuse of so many humans and other animals behind closed doors, depend on our refusal or incapacity to imagine what is happening in those horrific places. That is what our imaginative poverty has wrought. No one is to blame for that, but still…

Or, at least, we might see what might be possible, after system and civilizational collapse, for our descendants, on the other side.

If we could only imagine.

This entry was posted in How the World Really Works, Illusion of the Separate Self and Free Will, Our Culture / Ourselves. Bookmark the permalink.

2 Responses to Imagining the End of the Journey