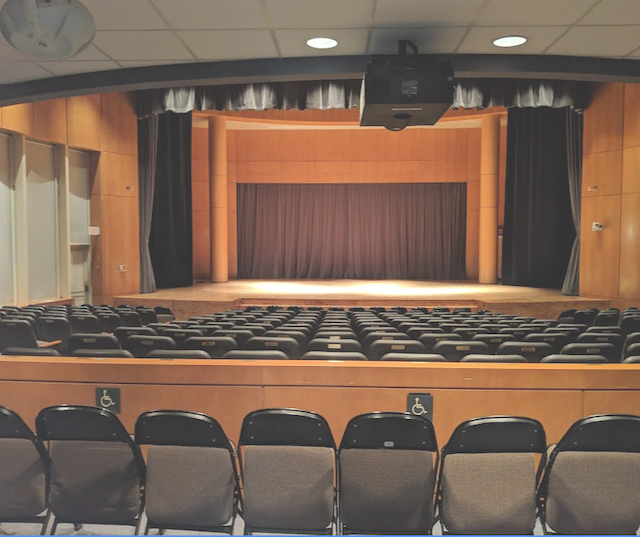 the Inlet Theatre in Port Moody, near my home; photo for Google Maps by Malvina

This evening I’m walking to the theatre, and thinking about how the arts evoke certain emotions in us.

It’s dark already, and now that rush hour is over I can hear the murmurings of roosting birds as I pass over the creeks and paths on my route. I wonder why I prefer listening to the sounds of birds, especially their quiet and quirky songs, to listening to human voices. And I think again about the capacity of ‘sad’ songs to evoke tears that are, somehow, tears of joy rather than of misery.

The word pathos has many meanings, but the meaning I refer to now is the “quality that arouses pity or sorrow”. Although the term is often used to refer to evoking any kind of emotion, the original sense of the word was “suffering”, and in the arts it is the use of stories of the tragedy or suffering of others that seems to evoke these strangely joyful feelings of sympathy (=suffering with) and connection in audiences.

We do not, of course, actually want to suffer. But we do love sad songs and stories about others’ suffering and tragedy that let us connect to them from a (safe?) distance. This is not schadenfreude however; we don’t relish the sufferers’ torment.

Evolutionarily, suffering is an undesirable occurrence. Animals in great pain tend to isolate from others, and go off by themselves to die. Humans, on the other hand, seem to like to broadcast their suffering to anyone who will listen. Wild creatures that are stressed and suffering tend both biologically and culturally to stop procreating, whereas humans suffering seem to see it as a badge of courage and procreate indifferently, perhaps in the hopes that their children will look after them when their suffering becomes incapacitating, or in the hopes that, if you can follow the twisted logic, their children will live better future lives as a result of their suffering and sacrifice (not to mention the perfection of the afterlife if they grin and bear their current suffering). Salvationist mythologies all seem replete with stories of suffering (being nailed onto a cross, etc) that “redeems the sins of humanity”. From our wild animal essence, how did we come to this?

There is a cat sitting on the porch of a house I am passing, in the dim porch light, like a Hallowe’en decoration, blinking at me, its green eyes gleaming in the dark. It keeps looking back at the house, so it is clear it wants someone to let it inside.

As a softie, I might imagine it is suffering, and feel bad that I cannot open the door for it. But I am sure it neither knows nor cares whether I am suffering. It has no sins that need redeeming. It needs no stories to feel what it feels.

I tell myself that it is probably not suffering.

I think about how fruitless it is to write about such things, or about anything; writing is such a misleadingly solitary pursuit, and nothing is ever really communicated. The best that we can hope for is that someone will read into what we write something that is meaningful to them. Mary Oliver tried I think to capture this in her poem Forty Years:

for forty years
the sheets of white paper have
passed under my hands and I have tried
.       .to improve their peaceful

not one page
was less to me than fascinating
discursive full of cadence
.       .its pale nerves hiding

in the curves of the Qs
behind the soldierly Hs
in the webbed feet of the Ws
.       .forty years

and again this morning as always
I am stopped as the world comes back
wet and beautiful I am thinking
.       .that language

is not even a river
is not a tree is not a green field
is not even a black ant traveling
.       .briskly modestly

from day to day from one
golden page to another.

There is a young couple walking ahead of me, mid-teens I’d guess. The path we’re on is narrow and I’m in no hurry, so I slow down to their speed so as not to crowd them.

They are flirting, shyly, awkwardly. Their laughter is giddy, forced. They look at each other intensely, but then quickly look away. They are talking about something, anything, I’m guessing, to avoid talking directly about their feelings. But there is no mistaking the smiles, the body language, the breathiness. I smile, and hope things will go well for them. That they won’t hurt each other, or miss the opportunity to be what they might be, choking on hello. (Sorry, another sad song.)

I grow self-conscious behind them, and decide to pass them and leave them to themselves. As I do, I realize they are both the same gender… and that that doesn’t matter.

I go back to ruminating about suffering, and wonder how we, as a species, became so “pathetic”, in the sense of preoccupied with resisting and rationalizing and even celebrating suffering as virtuous, rather than seeing its presence as a sign it’s time to go, and to let go? We are not ‘meant’ to suffer — our bodies do not handle it well, and whoever said “what doesn’t kill us makes us stronger” clearly never suffered from a chronic disease.

It’s as if our culture tries to inure us to pain and suffering because it knows our lives are going to be full of both. We could never go to war (or send others into it) if exposing ourselves to suffering and inflicting it on others were anathema to our culture. What madness is this? At what point did our species start ‘getting off’ on others’ suffering, especially of ‘bad guys’ in the news, literature and film?

What other creature could possibly feel, and think, that another creature “deserves to suffer” for something that, because of its conditioning, it had no choice but to do?

I’ve reached the theatre, and the performers, Shari and Cindy, both new friends of mine, are in good spirits and fine form. It’s wonderful to watch two strong women perform. I am watching the expression of the people near me when they play ‘sad’ songs. Shari’s lyrics are powerful, and although the audience is quiet, some of the songs have a lot of the audience (including me) in just-noticeable tears — and as many men as women, from what I can see. They sing about loss, about separation, about forgiveness. But the sense I get from the audience is one of incredible warmth, recognition, connection and appreciation, not any kind of ‘sympathetic’ suffering. Is this catharsis? What is going on here?

I have no idea.

I’ve linked to one of Shari’s newest songs before, but since IMO it’s one of the finest ‘sad’ songs ever written, and it has me thinking again about our recognition and connection to others’ suffering, I’ll wrap up this post, and this month’s writing, with The Sweater, again.

If I remember you were wearing that sweater
the first time we met — Oh, how could I forget?
I thought in that moment I could love you forever —
That shy crooked smile, or was it something you said?

And I knew I was yours for the worst and the best.
Your sweater is worn now and there’s nothing much left —
Like all of your memories, losing their threads.

The kids will be coming to see you on Friday —
Yes dear, they’ve grown, they have kids of their own.
They’ll stay in that motel, the one by the highway
Remember the one where you hoped I would come to you?

And knew I was yours for the worst and the best.
Your sweater’s unraveling; there’s nothing much left.
Like all of your memories — losing their threads.

Now every day that you’re farther away from me
I’m merely waiting for moments,
When out of thin air, oh you’re suddenly there!
And I missed you! Oh, how I miss you!

And oh I was yours, for the worst and the best —
Your sweater, I sleep with it, close to my chest.
Like all of our memories, I pull at the threads…

3 Responses to Our ‘Pathetic’ Species