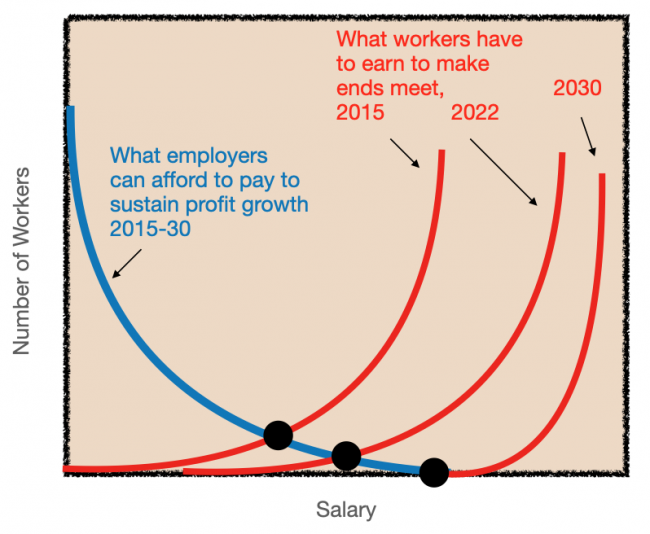 What happens when what employers can afford to pay to sustain their profit growth is less than what workers need to make ends meet? (Hint: It starts with a ‘C’)

There is a class/caste war going on throughout the Euro-American empire between employers and workers of every stripe. No one is to blame for this — it’s the inevitable result of over-reliance on our fundamentally defective capitalist economic system. Here’s what’s happening:

Like every other aspect of the untrammelled capitalist system, this is completely unsustainable. Exhausted, underpaid workers can’t afford to buy the products in the volumes and at the prices that the top castes need to sell at, to sustain perpetual profit growth. So now the top castes have become dependent on (1) other top caste members buying their luxury product lines, to subsidize the fall-off of purchases by the rest of the population, on (2) sales to citizens of foreign countries, and on (3) automation, and dismantling of support services in favour of “self-serve” (ie no service) models.

There’s a limit to how much profit can be generated by the top castes just buying more and more from each other (though that limit may be farther off than you might think). And as the Euro-American empire alienates more and more of the rest of the world through its brutal fiscal, monetary and political policies, and threatens more and more military adventures with the very countries it depends on for cheap supplies and new customers, there are severe limits to profit growth opportunities from foreign operations as well. Of course, there is the hope that by toppling the governments of Russia and China, trillions of dollars of cheap resources can be stolen, keeping the Euro-American empire’s costs low just a little longer.

Meanwhile, opportunities for automation, outsourcing and eliminating support services and ’employee benefits’ have pretty much been exhausted.

But only so much strapping tape can be applied before the whole package starts flying apart. And don’t be fooled — the top castes know this cannot continue, and are preparing for economic collapse, hoarding as much as they can before it happens.

The supply/demand chart above basically illustrates the dilemma of the current economy. Workers need to earn more and more as prices and costs soar, especially for things like housing, health care, healthy food, private transportation, and, now, debt interest costs. The actual rate of annual cost increases has been distorted by governments and banks ever since the governments of the Reagan/Thatcher era replaced the honest formulas with fake ones 40 years ago. The true ‘consumer’ cost of living has been rising annually by about 1o% for over a decade (ie a doubling of costs every 7 years), and rising interest rates and jacked-up prices for corporate goods could easily push true cost-of-living increases close to 20% for working families soon.

But while workers need more and more to make ends meet, employers whose wealth depends on endless profit growth are compelled to try to give workers less and less. When the supply and demand curves no longer intersect at all (or intersect at “zero workers”), you have a crisis. Look at all the economic collapses in countries around the world since 1980 and you’ll see what this crisis portends.

There is no “solution” to this crisis. Systems self-sustain until they can’t, and then they collapse. If the top castes keep trying to squeeze workers, they will end up with no willing, healthy workers at all — which means no customers, either. But if the top castes were to blink and start to offer reasonable incomes and essential benefits to workers, their profits would crash, and along with them, the stock and real estate markets, the wealth of the top castes and those (eg pensioners) dependent on them, and ultimately the entire economy.

This system is going down, one way or the other.

This will, like all economic crashes, be exceedingly difficult, but it might actually be a good thing. It may force us, if we want to avoid blood in the streets, to quickly abandon the existing dysfunctional economic system (as we did in the 1930s), and use the tax system and price controls to massively redistribute enough wealth, at least throughout the nations of the Euro-American empire, to stave off widespread starvation and revolution.

When a system fails, it has to be replaced with one that works, not ‘reformed’. This is a ghastly, messy and sometimes prolonged and miserable process, but it is not unprecedented. We haven’t ‘always’ lived under this broken, arbitrary and grossly unjust economic system.

I also suspect that over the next decade we will see such staggering levels of individual, corporate and government bankruptcies and insolvencies that they can only be resolved through the granting of some kind of Jubilee — an across-the-board forgiveness of debt if it exceeds one’s net worth and reasonable capacity to repay it.

This will have the effect of further redistributing wealth from the top rentier castes to the remaining castes. But as this collapse will bring down most of the large corporations that depend on endlessly-increasing profits to survive, it will largely eliminate what we call the ‘labour market’ — jobs offered by employers to employees.

So what, then, might happen to the poor worker caught up in this tumult?

We might dream that the replacement economy might include a guaranteed annual income sufficient to pay for all essentials of life that were not offered free by the state. It’s repeatedly been shown that the costs of this are far less than the costs of police, prisons, hospitals, temporary shelters and other infrastructure currently used to ‘deal with’ those unable to cope for themselves. Finland and Cuba offer some imperfect lessons in how aspects of such a system might work.

But we have been so propagandized by the top castes and their paid politicians and media to believe that such “socialist” economic systems can never work, that what might be more likely to emerge after collapse is either (1) an attempt to reinstate a capitalistic economic model (perhaps with a few constraints to to prevent current levels of inequality and corruption from recurring), or (2) a neo-feudal system, where essentially everything is privatized and corporate czars become de facto governments making their own laws and rules about what ‘labour’ can and cannot do. Like “company towns” writ large. Many of today’s struggling nations show how ghastly this would likely be, but ideologues won’t be swayed.

So after collapse we might see either another Dawn of Everything, or an era of substantial serfdom. It won’t be a clean transition in any case. And it’s anyone’s guess how it will play out. But whatever emerges, it won’t be anything like the current system.

The words ‘job’ and ’employee’ were coined just 170 years ago, and grew out of a concept of service that originated as servitude, as a form of slavery. I’d like to believe that when we build new economic systems after the collapse of the current one, we’ll pick less hierarchical, less caste-ridden ones, in which work is collaborative, and where people work together towards shared goals, rather than working “for” other people.

But then the politics of caste run deep in human societies. Despite the hopeful messages of The Dawn of Everything, there is evidence that our proclivity for forcing our fellow humans to do work, involuntarily, for others, goes back a long way.

But that doesn’t mean it has to be that way.