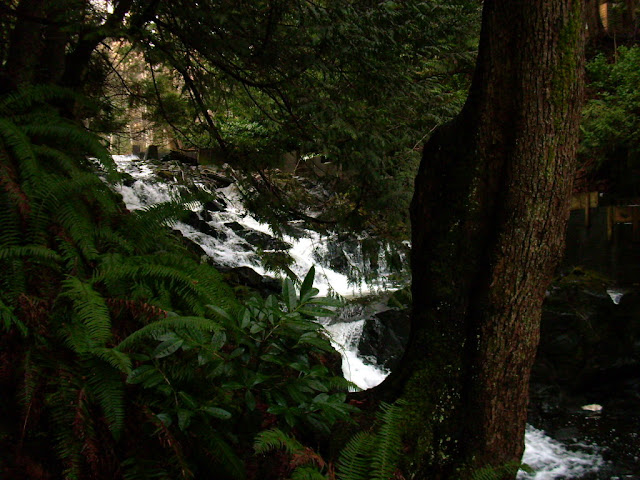 photo taken on Bowen Island, my new home, by Marcela

Resilient Systems vs Efficient Systems: Ever since I read David Ehrenfeld’s Beginning Again I have been intrigued by the stark contrast between modern ‘efficient’ industrial processes and systems, and ‘inefficient’ but effective and resilient natural systems. Natural systems are full of deliberate redundancy and constant evolutionary experiment and adaptation, whereas industrial systems are wound tight, change-resistant, fragile, seeking their own perpetuation by trying to control and prevent outside factors. Stoneleigh has done an exhaustive study and review of the work of Buzz Holling, Bob Prechter and Joseph Tainter, leaders in adaptation and resilience theory, and it’s hard slogging but important reading. See the Thoughts for the Week below for more on this theme.

How Online Activism might work: Andrew Mason presents some interesting ideas on why online activism hasn’t worked and how, using ‘tipping point’ methods, it might. Thanks to Tom Atlee for the link. Some key points:

What a Difference a Decade Makes: The end of a decade tends to make us reflective, and it can be helpful to think about the journey we have taken over the past decade, and how far we’ve come, and how far we’ve yet to go. Such a review, if written down, can also be very helpful for readers/listeners to understand and appreciate the context for what you write and say. I’m therefore going to do such a “decade recap” soon, and put it in my bio. Here are two good recap models to follow: Sharon Astyk’s “How We Got Here” and Janene Smith’s “What a Decade It Has Been”. Anyone else up for such an exercise?

Move Your Money: Several readers have pointed me to this site which explains how leaving your money with big banks is bad for the economy, the ecology, and society, and how to move it to credit unions and other small, community-based financial institutions. 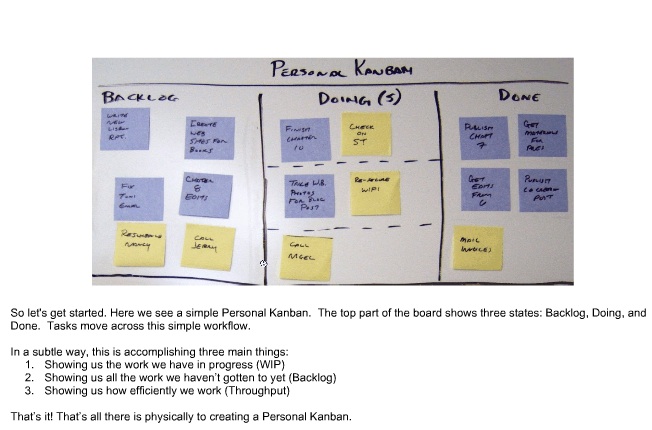 Getting Things Done: Personal Kanban Approach: Jim Benson suggests that when we lay out our work in a tableau like the one shown above, we can visualize what needs to be done, see the bottlenecks and impracticalities, and manage our workflow better. Thanks to Jerry Michalski for the link. The steps in the process:

One-Word Theme for 2010: Colleen Wainwright’s theme word for the year is ROOM. She writes about the theme word for 2010 of other bloggers. I think mine, in various connotations, is MOVE. What’s yours?

Hendrik Hertzberg on America’s Pathetic Fallacy: The brilliant New Yorker writer describes how the US political system is hopelessly broken and why Obama, under the circumstances, is doing what he can and what he must. Excerpts:

The pathetic fallacy is a category mistake. It’s the false attribution of human feelings, thoughts, or intentions to inanimate objects, or to living entities that cannot possibly have such feelings, thoughts, or intentions—cruel seas, dancing leaves, hot air that “wants” to rise. The American government has its human aspects—it is staffed by human beings, mostly—but its atomized, at-odds-with-itself legislative structure (House and Senate, each with its arcane rules, its semi-feudal committee chairs, and its independently elected members, none of whom are accountable or fully responsible for outcomes) makes it more like an inanimate object. In our sclerotic lawmaking process, it is not enough that the President, a majority of both Houses of Congress, and a majority of the voters at the last election favor extending health care to all citizens…

The health-care bill now being kicked and prodded and bribed toward passage will not “do the job,” either—only part of it. Are Barack Obama and the Democrats in Congress doing enough? No. But they are doing what’s possible. That may be pathetic, but it’s no fallacy.

Wandering in the Wilderness: Some stunning writing by Starhawk at the conclusion of her vigil in Egypt protesting the plight of Palestinians. Thanks to Tree for the link. Excerpt:

We are still wandering in the wilderness.  Over a far horizon, we can sometimes catch a glimpse of a new Promised Land–a place without walls, without checkpoints, without prisons, without masters and slaves, us and them, our tribe and their tribe—a place where everyone is free.  But we have a long journey still before we get there, and we do not know the way.

What America Can’t Do: The astonishing thing about this scorecard on America’s succeeding and failing institutions is that all of the ‘successes’ on the list are, in my view and that of most of the people I know, failures. Thanks to Raffi Aftandelian for the link:

Canada Suspends its Government: Canada’s right-wing extremist minority PM Harper has prorogued parliament for three months to avoid facing more criticism over his total capitulation to Big Oil in Copenhagen and the disastrous war in Afghanistan he so fanatically supports. Comedian Rick Mercer provides a scathing indictment of Harper’s lack of responsibility. Thanks to Eric Lilius for the link. Excerpt:

It is too bad that prorogation isn’t something that our soldiers had in their arsenal. When faced with the order to head out on a foot patrol in the Panjwai district of southern Afghanistan, to risk their lives to bring democracy to that place, wouldn’t it be nice if they could simply prorogue and roll over and go back to sleep? Soldiers don’t get that luxury. That is afforded only to the people who ultimately order them to walk down those dangerous dusty roads in the first place.

Mackenzie Valley Pipeline Approved: This ecologically devastating pipeline from the Canadian arctic permafrost to the Alberta Tar Sands (its main purpose is to provide clean energy to power the production of the Tar Sands’ dirty energy) has passed the next-to-last hurdle, and all it needs now is a rubber-stamp by the Big Oil-controlled Harper government and the similarly-controlled National Energy Board. Oh, and it needs lots of government money. I fought this project as a student 40 years ago, and we managed to stall it off, but it will be tougher this time. Our best bet is to dump the Harper government and lobby furiously against any public funding of this project.

Heather Gold, a kind of NoCal version of Colleen Wainwright, explains how to turn a presentation into a conversation. Thanks to Jerry Michalski for the link. Excerpt from Heather’s ‘unpresenting’ notes:

Techniques:
Care.
Contain everyone. Go ﬁrst.
Be vulnerable: Be genuine. Express yourself. Emotions affect energy more than data. Your vulnerability allows others to do the same.
Accept everything that happens. (classic improv: “Yes, and…”)
People are interesting if youʼre interested. More will participate if they feel listened to and invited.
Energy follows attention. Arthur Miller was right: Attention must be paid.
Feature people not as an end unto themselves (ie experts) but as kindling to start and scale the conversation
Translate everything: what did they say? what did they mean? If youʼre not sure: ask.
Mirror / give acknowledgement to all contributions.
Connections are strengthened more quickly by difference. More energy released.
Thread and make connections. Acknowledge others who thread and respond. Eventually the “room” will thread itself some if you model it.
Domino effect: drawing in someone on the fringe (“low status”) has exponential effect. Ampliﬁes connection.
Release tension: name the unnamed.
Have cake.

If you’re familiar with Myers-Briggs personality testing, you’ll enjoy this Pumpkin Soup recipe adapted for each personality type. Thanks to Isabella Mori for the link.

THOUGHTS FOR THE WEEK: On Collapse:

From Joseph Tainter in The Collapse of Complex Societies:

Collapse, if and when it comes again, will this time be global. No longer can any individual nation collapse. World civilization will disintegrate as a whole. Competitors who evolve as peers collapse in like manner.

From David Ehrenfeld, in Beginning Again: