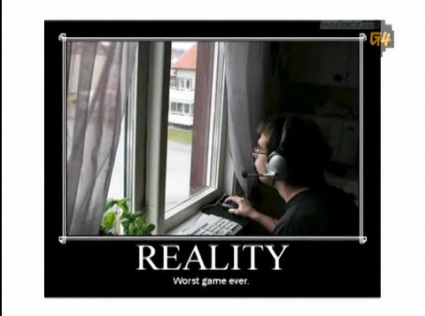 The Myth of Self-Reliance: On the pages of most of us Post-Civ bloggers you’ll find exhortations for a return to a community-based society and economy, one based on principles of self-reliance. But Toby Hemenway makes a compelling argument that self-reliance in modern society is impossible and misguided, and our belief that by growing our own food, making our own clothes and tech tools, and learning to fix things, will somehow make us self-reliant when global systems collapse, is a dangerous illusion. Thanks to Tree for the link and the one that follows.

Solastalgia: Defined as “the pain experienced when there is recognition that the place where one resides and that one loves is under immediate assault”, solastalgia is “a global condition, felt to a greater or lesser degree by different people in different locations but felt increasingly, given the ongoing degradation of the environment. As our environment continues to change around us…  how deeply are our minds suffering in return?” I’m loath to allow psychotherapists and other pseudo-scientists and oversimplifiers to label as pathology what we must, by our nature, all feel, but this is an interesting read, a study of what Dave Smith helped me identify as “our unbearable grief for Gaia”.

“All We Make Now is Garbage”: Dmitry Orlov and John Michael Greer talk about the coming “long descent” civilizational collapse. Thanks to Avi Solomon for the link.

Get Ready For an Era of Deflation: Two interesting Automatic Earth reports this week. First, Ilargi explains why there will be a protracted period of deflation (falling prices and stagnant economic activity) before we can expect hyperinflation to kick in. And then, he explains why, as part of that deflation, housing prices are poised to collapse further as the government (i.e. taxpayer) gets out of the business of trying to boost prices. The argument that the first of the three big dominos of civilizational collapse will be the economy, not the End of Oil or ecological collapse, has never been stronger:

Home prices supported only by taxpayer money are doomed to crumble; the only things achieved by the Fed’s $1.25 trillion purchases are a temporary delay in home price plunges, and another giant transfer of bank and lender losses to the state (re: the population). If only for this reason the Fed would do well [as the British authorities recently did] to warn the American people that hard times are a-coming.

Most people are far too complacent when it comes to the consequences of a shrinking economic system. Many claim that we can easily downsize to smaller homes and smaller lives, since there’s so much we don’t really need anyway, that we will move in together and return to “good” conversations, growing our own tomatoes and all that. But that’s just not going to happen voluntarily, not on a large and wide scale. The human mind has no reverse. It doesn’t even have a steering wheel. We are built for one of two things: go forward or crash. It looks like there’s no forward left before a major crash happens first. It also looks like there’s not a whole lot of people who realize this.

Another $1.6T to US National Debt: A full $1T of the staggering and calamitous US overspending is military. Still, none of this is being paid for by war taxes on the rich, the only ones who could afford such taxes, as the US edges closer and closer to bankruptcy and a catastrophic downgrade of the its credit rating and a commensurate disastrous spike in borrowing costs. Thanks to Raffi Aftandelian for the link.

A Third of a Trillion Dollars to Fix Water Pipes: That’s the latest estimate from the US EPA to rectify decades of neglect and short-termism. Because the US states are starting to go bankrupt, none of this will be spent, and the consequence will be a gradual collapse of the country’s Civil War era water and sewer infrastructure. Get ready to haul your own drinking water, like in the struggling nations, unless you work for Goldman Sachs and can afford to pay someone else to do it for you.

America the Fragile Empire: Niall Ferguson rehashes the nature of complex systems and describes the vulnerability of the current American state. Unfortunately, unlike the collapse of the Soviet Union, a collapse of the US would precipitate the Long Emergency: a global economic collapse, leading to a series of global geopolitical crises and then, exacerbated by oil scarcity and ecological collapses, a slow crash of our equally fragile and overextended civilization.

Just Do One Thing at a Time: PS Pirro reviews Seth Godin’s new book, and sums up the perils of multitasking: “Most of the energy it takes to juggle a bunch of projects goes into the juggling, not into the projects.”

History of Mondragon: A comprehensive summary of the world’s most successful and enduring cooperative. Thanks to Jerry Michalski for the link.

Monsanto + Fox TV’s Health Danger Cover-Up: From a couple of year’s ago, a Canadian expose of how two Fox TV investigative reporters were threatened and bullied by Monsanto for a never-aired report telling the truth about the dangers of Monsanto’s bovine growth hormone (and the complicity of the FDA in approving it for sale), then intimidated and finally fired by their employer’s (Fox TV’s) lawyers and executives, when they refused to lie or bury the story. A shocking demonstration of the power and ruthlessness of global corporatists. Thanks to Jerry Michalski for the link.

Anthrax Murders Update: Although the FBI has deep-sixed the anthrax murder investigation and convicted “squalene Bruce” Ivins in absentia after his suicide, evidence keeps turning up that Ivins couldn’t have done it, at least not alone. The anthrax sent to the liberal Democrats in 2001 was astonishingly sophisticated stuff. We’ll never know who really was behind it. Thanks to Rayne for the link. 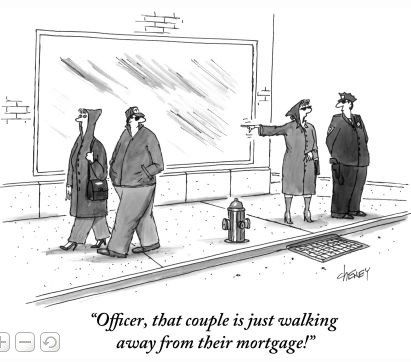 Cartoon by Tom Cheney in The New Yorker. His artwork is available here.

Training the Consumer to Jump Through Hoops: Those of us who are exceptionally informed and resistant to commercialism may be surprised and disgusted at this vision of how average citizens will be seduced by commercial interests exploiting new RFID technologies and our inherent love of game-playing. Thanks to Jerry Michalski for the link.

Facebook: No Assisted Suicide Allowed: A new site is helping people commit Web 2.0 suicide, by disconnecting from social networks on the Web. Facebook is suing. Thanks to Tree for the link and the one that follows.

Fallen on Hard Times: A clever, pertinent and vintage Jethro Tull song. Posted by Keith Farnish on the new post-civ blog we share with co-conspirators Sharon Astyk and Guy McPherson.

THOUGHTS OF THE WEEK

Let Your Dog Out to Pee: Reflections on the unnatural sport of skiing and more wonderfully-crafted wisdom from Melissa Holbrook Pierson.

A short poem from Edwin Markham (thanks to Chris Corrigan for the link and the one that follows):

From Jack Ricciuto, Strategy in Four Easy Steps (beats the hell out of most of the approaches I’ve seen used in 35 years in business). Just answer these four questions: