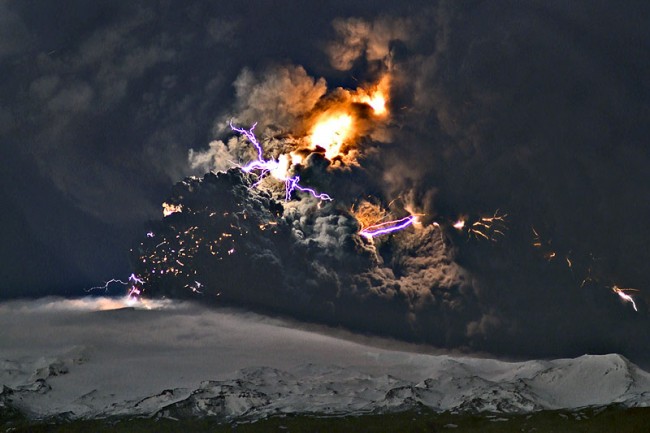 Eyjafjallajökull’s show of fire, electricity and smoke towers over Iceland’s mountains. Thanks to Cheryl for the link.

The Importance of Not Getting It All Done: “The best answer to making our lives work the way we want is to not obsess about what we can’t do and go hard as we can towards what we really want.” Another brilliant, inspiring and deeply personal piece of writing by Sharon Astyk. Just go read it, and then think hard and long about what you should ignore, what you should stop doing, what you should not try to start or finish, and what you might do with the time and energy that all this inaction will free up for you.

Everything You Ever Wanted to Know About Sustainability: Toby Hemenway, whose article on the impossibility of being “self-sufficient” I linked to last month, has a video that explains the importance of permaculture as a means of fending off disaster for our species, but asserts it will not be enough to prevent the collapse of our civilization. As Jared Diamond famously explained, agriculture was the worst invention in human history. Pre-agriculture humans were healthier, longer-lived, more resilient, freer, and worked much less than agricultural humans. This is a wonderful presentation. Thanks to Paul Heft for the link.

The Value of Nothing: Raj Patel delivers a powerful defence of socialism and the need for a new egalitarian social and economic system,  at a time when the moral and philosophical bankruptcy of industrial capitalism has become self-evident. Thanks to fellow Bowen Islander Doug Nash for the link.

The $5 Trillion Pension Shortfall: “There will come a point in time, and in all likelihood it’s already here, when wages for the working, and services for the community, will have to be drastically cut, not just because tax revenues plunge or because the overall economy is limping along, no, solely to pay out pensions to those who no longer work.” The truth Ilargi points out is that the boomer generation’s pensions are so severely underfunded, and the amount of funds available from tomorrow’s workers so impossibly inadequate to make up the shortfall, that this unsustainable debt is going to crack open at both ends: pensions canceled for boomers, wages slashed for tomorrow’s workers, and services slashed for tomorrow’s needy. Just one more insane debt that will soon come horrifically due, in every affluent nation on the planet.

A Gathering Storm of Discontent: Chris Hedges wonders when American fury will boil over: “The Democrats and their liberal apologists are so oblivious to the profound personal and economic despair sweeping through this country that they think offering unemployed people the right to keep their unemployed children on their nonexistent health care policies is a step forward. They think that passing a jobs bill that will give tax credits to corporations is a rational response to an unemployment rate that is, in real terms, close to 20 percent. They think that making ordinary Americans, one in eight of whom depends on food stamps to eat, fork over trillions in taxpayer dollars to pay for the crimes of Wall Street and war is acceptable. They think that the refusal to save the estimated 2.4 million people who will be forced out of their homes by foreclosure this year is justified by the bloodless language of fiscal austerity. The message is clear. Laws do not apply to the power elite. Our government does not work. And the longer we stand by and do nothing, the longer we refuse to embrace and recognize the legitimate rage of the working class, the faster we will see our anemic democracy die.” Well, we’ll see. I think the pressure cooker has a long way to heat up yet, given the effectiveness of the propaganda that blames the poor, the sick, the homeless and the unemployed for their own misfortune. And I think the democracy died a long time ago, when no one was paying attention. Thanks to Paul Heft for the link.

Richard Dawkins Calls for Arrest of Pope on Next British Visit: The Catholic Church, like most organized religions, has been perpetuating crimes against humanity for more than two millennia now. Pedophilia is their least popular atrocity, so this is a great initiative to speak truth to power, though it has no chance of succeeding. Thanks to Karen Hay-Draude for the link.

Canada Sued by Greens for NAFTA Violations in Tar Sands: Although it’s largely symbolic, a lawsuit by environmental organizations arguing that Canada, by not enforcing its own environmental laws on Alberta Tar Sands operations, is in violation of NAFTA, is an interesting development. Non-enforcement could be seen as a subsidy to Canadian operators, putting them at competitive advantage relative to US and Mexican operators, which would make the government liable for huge fines and penalties to compensate the other countries for resultant competitive losses. The point, of course, is to embarrass the Canadian government into enforcing its own environmental laws, which the extreme right-wing corporatist minority Harper government has no intention of doing unless it’s forced to. Meanwhile, BC’s First Nations are unanimously opposing the pipeline planned to ship this foul bitumen sludge to China.

Bold Plan for Rescuing US Homeowners Rebuffed by Wall Street: Obama’s advisors finally came up with a rescue plan that makes sense: Charge the banks, not homeowners, for reckless mortgage lending, by simply forgiving mortgage debts to the extent they are in excess of the current market value of homes. Of course, the banks are violently opposed to the idea that they should be responsible for losses that arose from their excessive risk-taking.

Telling It Like It Isn’t in Afghanistan: In case you’ve been asleep since Obama took power, Glenn Greenwald explains how the Pentagon’s propaganda war of lies about the US occupation of Afghanistan, and the complicity of the mainstream media, continue unabated from the levels of the Bush years.

The Bright Side of Extinction: A very entertaining, if overlong, set of stories by “Hitchhiker” author and humourist Douglas Adams on economics, externalities, evolution and extinction. Thanks to Alexis Billet for the link.

How Complexity Emerges From Simplicity: Two short YouTube videos from PBS on the history of thinking about emergent behaviour. It got me thinking: Is YouTube itself an emergent complexity?

Google Maps Adds Cycling Directions: In addition to car, public transit and walking directions, you can now get cycling directions between any two places in the US through Google Maps.

THOUGHTS FOR THE WEEK

From Joe Wilkins in Orion, a grueling but brilliantly written essay about how hard life was and is for small farmers and the rest of the world’s working poor.

Why We Care More About a Single Suffering Creature Than a Genocide: A remarkable shaggy dog story with this thesis: “The reason human beings seem to care so little about mass suffering and death is precisely because the suffering is happening on a mass scale. The brain is simply not very good at grasping the implications of mass suffering. Americans would be far more likely to step forward if only a few people were suffering or a single person were in pain. Hokget [the dog lost at sea] did not draw our sympathies because we care more about dogs than people; she drew our sympathies because she was a single dog lost on the biggest ocean in the world. Our hidden brain — my term for a host of unconscious mental processes that subtly biases our judgment, perceptions and actions — shapes our compassion into a telescope. We are best able to respond when we are focused on a single victim.” Thanks to Kal Joffres for the link.

From Rob Paterson: “The trouble with the world is that the stupid are cocksure and the intelligent are full of doubt.”

A CONVERSATION WITH TIME

You sit at the table in the dim light at the border of dawn with your past looking back at you. You reach out but your past withdraws. “You cannot touch me,” it says, “I am always out of reach.”
You take back your hand and sit facing your past. You ask why it is here.
“I am always with you,” your past says. It gets up and walks around behind you; you turn your head but your past moves to the corner of your eye — a shadow glimpsed, always elusive. You sense its presence behind you, growing older moment by moment. When you look back across the table your future sits there with its back to you.

You cannot see its face.