Living in Another World 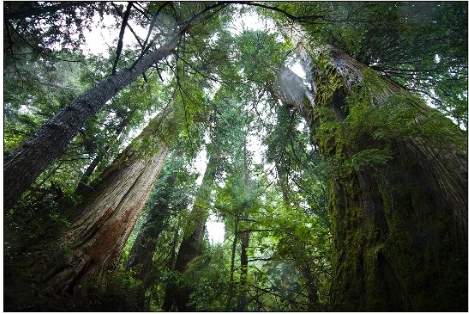 photo: Primal Strand, from the book Emeralds at the Edge by Andy Wright

What does it mean to “walk away from civilization culture”? Essentially, it means no longer accepting its messages or its worldview, and, as much as possible, no longer participating in it as a “consumer”, “reader”, “viewer”, “listener”, “citizen” or “employee”. Because this culture is now global and ubiquitous, there is no escape from it, so walking away means living on the Edge of it.

I have had the good fortune to survive and benefit from civilization culture, so walking away from it now, for me, is easy. For most, it takes courage, knowledge, and a bit of sacrifice. And I don’t blame or disparage those who still live within its clutches — for most there is no real choice.

When I walked away from civilization culture, I disconnected myself from everyone who is still caught up in that culture, still believes in it, depends on it and thinks it’s real. It’s not something you can do half way: When I rejected the culture, I rejected it entirely. So:

I have taken to heart Dark Mountain’s challenge that it is irresponsible, unforgivable, to do any work that is not devoted to the representation of civilization culture for what it really is, or in opposition to the worst manifestations of that culture, or the imagination, preparation and resiliency-building needed to transition to the next, post-collapse culture. But almost no one seems ready for this work, or willing or able to hear its terrible messages, its awful truths.

I’ve been ranting that I’m tired of conversation, and I thought this was because of the inherent limits of our modern languages. But I’m beginning to think it’s not so much the limits of language as that, having rejected every notion of civilization culture, I no longer have anything to talk about with most people.

When I’m out in public I often listen to conversations, and what I hear is nothing but vapid time-wasting, echo-chamber reassurances, regurgitated propaganda, sob stories, unactionable rhetoric, appalling misinformation, self-aggrandizement, gossip, manipulation and denigration of others. I hear no new ideas or insights, no cogent discussion of how we can prepare for, and increase our resilience in the face of, the impending sixth great extinction and the economic, energy and ecological collapses that will push that extinction into overdrive and bring down the most expansive and least sustainable civilization in our species’ short history. And what else is worth talking about?

Yet, all around me, people who have not had the luxury of time and resources, as I have, to learn how the world really works, and what is really going on, and to imagine what we might do about it, and how we might live better, carry on as if nothing much is wrong and as if everything in our unsustainable and doomed culture somehow makes sense, and will somehow continue, and get better.

For much of my life I felt as if I were the one living in another, twilight world, shut off from everybody else, unable to make sense of, connect with and be part of the seemingly exciting world they lived in. But now I feel it is all these people, lost in illusion, who are in the twilight world, the one that makes no sense and has no substance. Part of me wants to rescue them, but part of me knows that they are not ready or able to listen, that their worldview is so utterly different from mine that it is as if we spoke unfathomably different languages.

There is a kind of comfort in learning so much, in being “too far ahead”, in knowing that I am more aware of the terrible truths of this world and of our time, than most people can or will ever be.

But it is a cold and lonely comfort, one suffused with grief and a sense of anomie, rootlessness, purposelessness, directionlessness. As I am reconnecting with all-life-on-Earth I am disconnecting from the culture I have known all my life, and all the people attached to it. It is a bleak and anti-social journey I am on, and knowing that it’s right, and inevitable, and will help me become nobody-but-myself again, is, at this frightening moment, small solace.

27 Responses to Living in Another World