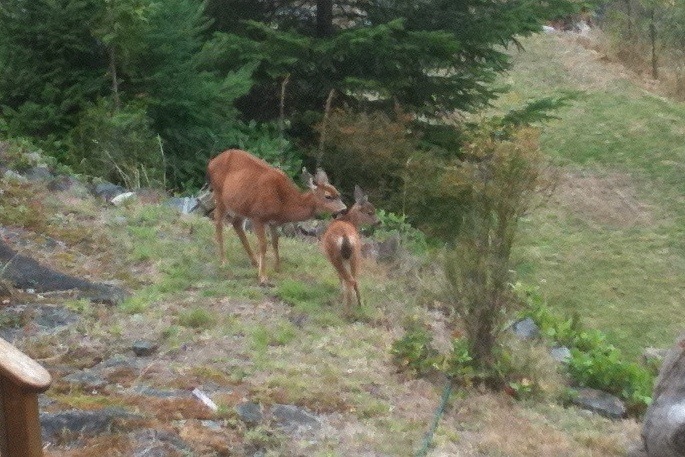 wash up before eating: photo out my kitchen window last week

It would seem that, if you are a certain kind of popular author, a good way to ensure that the future comes to resemble your worst nightmares is to write a novel about them. This has certainly worked for Orwell, Huxley and Kafka. But there is also an alternative: compose your own fiction instead of accepting anyone else’s, then go ahead and turn it into reality. A good first step might be to write a short story… Don’t hope, don’t wish, don’t dream, but do write your own fiction and use it to create a present that works for you. Invent places for yourself and for those you care about in your stories about the future, and then go ahead and live in them.

I’m in the process of writing a story/scenario for Bowen in Transition, the Transition initiative in our local community, entitiled What Happened When the Oil Ran Out. It’s a Long Emergency story, one that depicts a crisis that doesn’t happen abruptly (like the “news” our media allege to keep us informed about), but rather emerges over a period of years. And it’s not a story of market-driven hyperinflation of oil prices, but rather a story of rationing, of oil and then all the goods and services that depend on it. It’s not a story of sacrifice or scarcity, but of relearning about sufficiency. It’s a story as old as civilization, and one that will, I believe, dominate the history of our civilization in the decades to come. It might also be my submission to Dark Mountain Issue 2.

The Death of Movements: Encouraging Divergent Approaches: One of my new favourite bloggers and fellow Dark Mountaineer, Antonio Dias riffs off of John Michael Greer’s article about dissensus – the encouragement of divergent rather than convergent approaches to deal with crisis. This is nature’s way of being prepared to adapt, and it’s also worked well historically for humans in crisis. Antonio writes:

Embracing dissensus implies a process of actively and passively looking for and accommodating to what might be the opposite of resilience: a letting go, an acceptance of the chaotic not only as the true state of our condition; but as the only source of a way past our condition. You hit what you’re aiming at. When you search for stability, or even resilience, in a time of chaotic change and a closing off of options you will get stability, the only stability left: death. Your resilience will keep you tied to this course until there is no other option. Dissensus at such times may be the only way forward…

We tend to think nostalgically of the propaganda, the mythology of movements instead of their reality. There were a few genuine mass-movements that did accomplish laudable goals, but the reality for most people was of being enveloped by the illusion of solidarity in struggle while they were being marginalized further and prepped for destruction…. Zoom out to the level of mass-extinction and global collapse and show us a movement that has had any useful impact.

It’s way past time to be nostalgic for the lack of a coherent message to coalesce a movement around. Instead of bemoaning the death of movements we need to see this as a welcome development. When the forces of Mono- – mono-everything – are joined together in a dance of death this is the time to embrace dissensus. Not as an ultimate paean to individuality, another shibboleth of modernity. Let us realize that even views, practices, and characteristics which go against everything we – in our own individuality, believe – may hold the key to a way forward. Not in any predictable, plan-able way, but within the unknowable twists and turns of evolution. This does free us from the need to lash out at opponents simply because we disagree with them, but it also imposes a new burden; the need to appreciate acceptance when things do not go our way.

Mourning for the World: Also from Antonio, an analysis of how we try to make sense, often foolishly, of events like the BP Oil Spill, and fall victim to the very human error of short-termism. Excerpt:

If we are to learn from what makes our moment unique: The conjunction of a tattoo of blows against the arrogance of hubris, coupled with a nearly global reach of information; so that we are both being hit from all sides by signs of collapse and have the knowledge that the same is occurring everywhere around the globe. These all lead to the slim chance of avoiding the exceptionalist traps that have always befallen those witnessing the fall of their city, their state, even their globe-girding empire before. High on the lists of lessons we may be the first to have the ability to take to heart is this one: Inevitable tragedy has its own timetable. It’s not ours to decide when the inevitable will befall us or even how it may come. Learning to set aside these reactions might free us to find unprecedented responses to our culminating predicament.

The list of our disillusions is long. It needs to be longer. It “should” be endless. Only then will we see that all the easy answers have already been tried and never did work. Only then might we find some way to de-rail the Juggernaut, or at least find the dignity to properly mourn for our world.

Pseudo-Activists and Faux Movements: What do 350.org, Greenpeace, WWF and the Sierra Club have in common? Keith Farnish explains that as part of the “mainstream” environmental movement, they have been co-opted by industrial civilization as passive performers of acts of modest, non-threatening, meaningless dissent, and they are now part of the problem they profess to be fighting against.

The Housing Bubble Catch-22: The NYT explains that Obama is trying to walk an impossible line between two responses to the housing crisis: (1) keep propping up prices with zero-interest mortgages and billions in advances and subsidies, or (2) let market prices fall precipitously to where the demand for houses will stabilize naturally. The problem with the first option is that it costs a fortune that is totally unaffordable, it’s unsustainable, and it isn’t working anyway. The problem with the second option is that it would (and eventually inevitably will) crash the entire US (and global) economy, causing massive foreclosures and bankrupting the entire banking industry. Get ready for big-time, long-term price deflation, coming soon to an overextended country near you.

Four Trillion Too Much US Consumer Debt: Ilargi explains that, even at today’s record low interest rates, Americans collectively have $4T more debts than they can possibly hope to sustain at current income levels, and that amount of consumer debt needs to be either repaid, and soon (in which case consumer spending, which drives the whole US economy, needs to contract by up to 30% from current levels, or forgiven (in which case the lenders will all go under). More Catch-22.

Gamestorming: A new book by Dave Gray et al summarizes the essential qualities of a good game, the key elements of good game design, and the main types of games that lend themselves to collaborative and deliberative group activities. Recommended.

Freeconomy: A new global initiative, paralleling the Transition initiative, is trying to create community-based, pay-it-forward, skill-sharing, tool-sharing, caring, money-free economies. Thanks to Tree for the link.

Alberta Tar Sands Pipelines Spring Another Leak: Enbridge, the Canadian company that pipes most of the toxic Tar Sands oil to the US, has been forced to close a second major pipeline when it burst, spilling thousands of gallons of oil in Illinois. A similar leak a couple of months ago spilled a comparable amount of oil into a river in Michigan. Partly in response to the leak, which an industry representative called “not unusual”, oil prices, and the price of Enbridge shares, both rose.

Afghanistan: Another Unpopular, Endless War: A clear majority of Americans want the US out of Afghanistan, now, yet Obama continues to ratchet up US involvement, and continue the torture and civil rights atrocities, in this unwinnable, miserable war. What does this tell you about democracy?

Gates Foundation in Bed With Monsanto: Cementing its “evil empire” reputation, Microsoft’s Gates Foundation, which operates tax-free as a charitable foundation in the US, has invested $23M in a venture with the corporatist scourge and global mega-polluter Monsanto. The goal: push the corporatist globalist industrial agriculture system, profitably, on unwitting and unwilling struggling nations. So much for charity. Thanks to Tree for the link. Tree also points us to a Grist article on just how energy-gulping our industrial agriculture system is.

A very moving post from Pete McGregor, about the last days of a cat named Ming.

Danny Bhoy on the Australian Fruit Police. Falling down funny. Thanks to Bowen’s Dawn Stewart for the link.

The Wind That Shakes the Barley. A great fall story from Bonnie Stewart.

From Steve Davis (thanks to Chris Corrigan for the link):

Once long ago, when asked by a reporter if he had a message he wanted the world to hear, Gandhi replied, “My life is my message.” Whether we like it or not, this statement is just as true for you and me today as it was for Gandhi then. Who we are and how we are is the medium through which our message travels. That medium is far richer and truer than what we say in words.   When we present our material to a group we are facilitating or training, what we’re really presenting is ourselves. Our deepest, thoughts, feelings, fears, hopes, and aspirations come through as an unspoken wave of information that others pick up at a level usually below their conscious awareness. Yet this material influences others more powerfully than mere words. So in a very real way, you are your material, and your life is your message!