Lesson From a Wild Cat 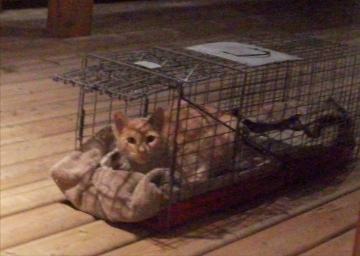 Four years ago I wrote about my remarkable experience with PucPuc, the wild grouse who used to greet me every day when I ran laps in my back yard in Caledon, and even climbed up and perched on my shoulder when I sat down beside her. Many readers told me I should see this visit as a sign from Gaia that I needed to reconnect with nature, slow down, pay attention. I was very moved by this experience, and I miss PucPuc to this day, even though I now live thousands of miles away.

About a month ago, while I was hosting a workshop for a group of facilitators, Tree noticed a small orange tabby cat on the deck outside. The cat was peering in through the window of the living room door very curiously, but he took off as soon as Tree opened the door. We noticed a poster a few days later about a lost orange tabby named Elwood, and since then I’ve been leaving food out for Elwood, who has become a regular visitor.

Ryan, who lives about a mile from me on Bowen Island, adopted Elwood and his brother as kittens after they were found abandoned. They both spent days outdoors and came in at night, but at some point last spring Elwood ran off and became feral. Ryan acquired a safe and humane cage trap from the local animal welfare organization, and I have been gradually putting Elwood’s food deeper and deeper into the cage, in anticipation of setting the trap mechanism once he’s come to trust it. The cage sits, locked open, outside on my deck, and is lined with a warm blanket and a towel that Elwood and his brother used when they were together, so it’s familiar to Elwood. 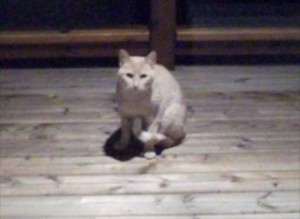 Day by day, Elwood and I have gotten to know each other better, and he has begun spending more time on my deck each day, arriving at 5:30 pm or so for the first half of his dinner, and returning at 11:30 pm or so for the second half. He’s become comfortable enough with me that my presence inside the house, even only a few feet away from him, does not faze him, but the minute I touch the door handle he’s gone. I can be playing music and talking away inside and he’ll sleep comfortably in the cage for hours at a time (he goes in there even when there’s no food, since I think it provides security from attacks by other cats plus warmth and coziness for sleeping).

The evening before last, I propped the living room door open while Elwood was away prowling, sat inside the open door with some food and blankets visible beside me, and waited for him to return. When he showed up he poked his head inside the house but would come no closer. He meowed quietly at me (“hey, put that food outside”) and I spoke back to him for about half an hour. It was a stirring experience. This cat was telling me that he liked the current arrangement and was not prepared to sacrifice his possible freedom for warmth and security. He was showing me that you can be wild, free and intimately connected with nature, and still have a profound, reciprocal and mutually beneficial relationship with a creature (me) who is tamed, constrained and separated from the wild. While I was inviting Elwood into the warmth, comfort and security of the house, he was inviting me into the wild, free and connected world that he lived in. He was giving me some ideas about what true presence in the world is. When Elwood gave up on the conversation and went into the cage to sleep, I closed the living room door.

I think we were both a bit sad.

4 Responses to Lesson From a Wild Cat