The Death of Nature 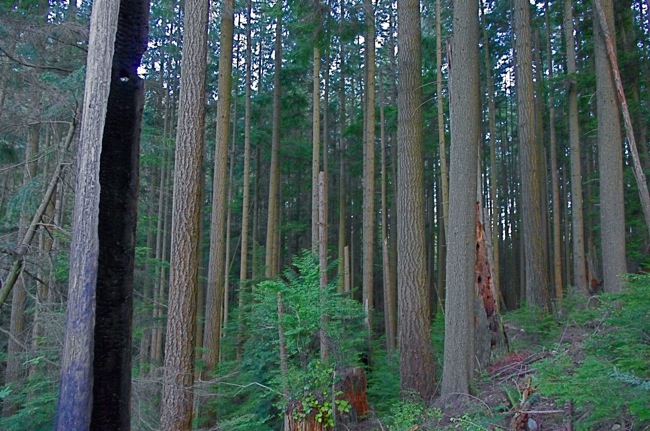 Last Sunday I went for a long walk in the woods.

I am fortunate to live on a hill overlooking mountains and ocean, in the only house on the street, adjacent to a municipal park which is in turn adjacent to a large piece of forested crown land called Block 6. Block 6 is included in plans for a National Park on Bowen Island that would include almost 40% of the land area of the island.

Block 6 is not “old growth” (>175 year-old trees) forest. The Sḵwxwú7mesh, the Coast Salish peoples from whom the Island and 2500 square miles of adjacent mainland was stolen by Europeans in the late 1700s, did not harvest much of Bowen’s temperate rainforest. Logging on Bowen by Europeans began in earnest in the 1870s, peaked in the 1890s, and continued until the 1950s.

Predominant Block 6 tree species are Douglas Fir, Western Hemlock, Red Alder and Lodgepole Pine with undergrowth of a wide variety of ferns, moss, grape and berries, and an average tree age of 90-150 years (meaning no logging since the end of the 19th century). Ecologists report a “significant” part of the area is “old growth” forest — never commercially harvested. Huszar Creek runs from Fairy Fen, a diverse wetland in the centre of the Block, to the Salish Sea on the south coast. The eastern part of the Block features Radar Hill, site of a military base during WW2 (lookout for Japanese warships) and, from then until now, communications towers and a gravel pit operation.

The picture above shows what I saw (and regularly see) for the first part of my walk. Even though much of the adjacent area remains undeveloped, you can see on the Google Maps satellite view precisely where Block 6 begins — from the park you walk through a veritable tree ‘curtain’ and suddenly the landscape becomes wild rainforest; and you can really imagine what this land looked like before the arrival of humans.

I decided to walk down to the sea, since I wanted to see the beach and forest in the Cape Roger Curtis area before the bulldozers changed it. CRC is a 600 acre privately-owned plot, comprising nearly one eighth of all the residential-zoned land of the island, scheduled for subdivision into 50 two-million-dollar 10-acre lots each with a multi-million-dollar monster executive oceanfront home on it. The alternative plan, which would have seen half the area set aside as parkland and the rest more intensively developed for about 400 families, was rejected by both the local politicians and islanders because of the lack of infrastructure to support so many new families (it would have increased the population of Bowen by 25%, albeit over a 20-year development period).

As it turns out, I was too late. As I walked from Block 6 into the CRC lands, what was last year an almost imperceptible change almost brought me to my knees. Although few of the lots have yet been sold (despite private helicopter trips for billionaire prospects to view the area), the roadwork has all been put in. Where there was once wilderness, now paved roads, subdivision signs, and fencing prevails. Sixty-foot-wide driveway entrances have been carved out at the edge of each of the first 14 lots to be offered. These 14 lots are not square, but long slivers 200 feet wide and 2000 feet long, allowing the developers to offer oceanfront access to all 14 billionaire owners, and hence demand the maximum price per lot. The recommended site for the monster homes is (of course) right by the ocean, and accessing it will require each buyer to construct a driveway the full length of the lot, from the access road to the house, almost a half-mile long, and requiring almost 1/3 of all the trees on the lot to be bulldozed just to build the driveway.

Close to tears, I sought to find the small pebble beach I had scrambled down a year ago at the end of my walk. This is what I found: 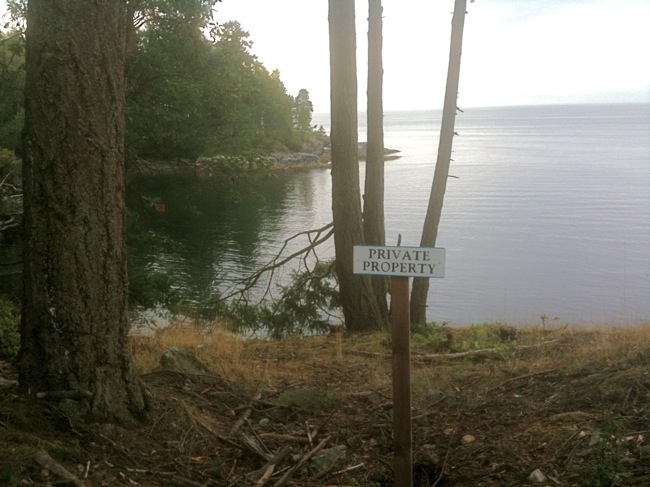 I guess I should have been prepared for this, but I was not. The oceanfront wilderness that was Cape Roger Curtis has been destroyed by two developers for the exclusive benefit of 50 billionaires. (I expect the developers have hived off the best lots for themselves and their friends, as invariably happens when such pristine land is subdivided.)

In the 1980s I saw this happen in Brampton, Ontario, where I lived then. Some of the best growing land in Canada was rezoned residential under the relentless pressure of developers, and, like Mississauga before it, the entire municipality was turned, in just a decade, into a wasteland of near-identical shoddy single-family homes on 20- and 30-foot lots. When I moved away to Caledon in the 1990s I saw it beginning to happen again — a developer sued the town council for a half billion dollars for not rubber-stamping their plan for a huge subdivision even though it ran contrary to the town’s official development plan.

Developers and their sleazy real estate and lawyer shills now provide over 90% of the campaign funding for candidates for municipal elections. We should not be surprised that even the anti-development candidates finally burn out from battling the relentless and well-financed campaigns to turn every square inch of ‘vacant’ land into profit. Candidates who can’t be bought off or driven off are defeated by pro-development candidates with slick and deceptive campaigns.

This is not, of course, something unique to Canada. It is happening, in various ways, all over the world. 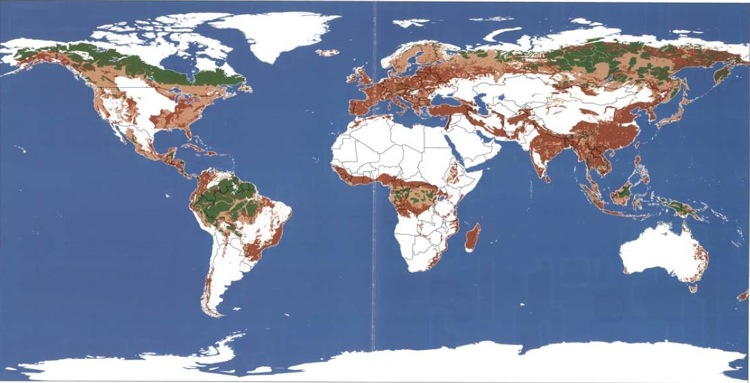 The green areas on this map (from the Forest Frontiers Initiative) are all that is left of the world’s wild forests, the only remaining areas that are large enough and sufficiently intact to support a natural and largely undiminished ecosystem. At current rates of deforestation they will all be gone in 50 years. The light brown areas are degraded forest, fragile and disrupted and now dependent on human ‘management’. Both the light and dark brown areas, comprising half of the world’s land surface, were wild forests as recently as 8,000 years ago. And most of the world’s deserts and grasslands, shown in white, have also been, at least intermittently, wild forests since the end of the last ice age, before human civilization spread across the Earth.

As the map above shows, within 50 years the desolation of our planet will be complete. No matter that our industrial civilization is unsustainable, and will collapse soon after the worst damage has been done.

The worst is always done at the end. With eleven billion people struggling against the forces of massive energy, ecological and economic collapse, we are not going to recognize the planet we’re left with as it all falls apart.

A bulldozer. Another baby. More stuff produced, more stuff consumed. More of the land gone. More resources exhausted. More waste. More debt, to the banks, to the Earth, to future generations. None of it can be repaid, undone, sustained.

4 Responses to The Death of Nature