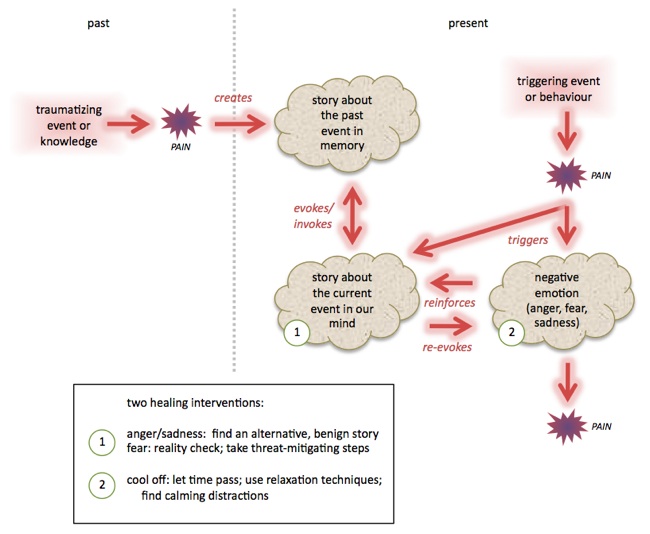 There are, it would seem, nearly as many approaches and therapies for dealing with triggers — events and actions that provoke negative emotions in us — as there are potential believers in them. Although I try to be open-minded about this, at this point in my life I tend to believe that there are a relatively tiny number of people with the skill, time and understanding of human nature to be able to help those afflicted (and I think that’s just about all of us, though I admit that triggers are more debilitating for some than others), over time, to recognize and ‘manage’ their triggers better. I have almost no use for the vast number of ‘self-help’ books that purport to help people deal with these on their own.

My sense is that most triggers tend to provoke three broad classes of negative emotional responses (there may well be triggers for positive emotions, but as long as they’re authentic and not delusional I’m content to see them as a good thing):

This intuitive grouping corresponds well to Parrot’s emotion ‘tree’ (though I sense that the ‘anger’ and ‘sadness’ groupings are more closely connected than we might think). The triggers for any of these negative emotions depend on our own experience and worldview. For example, many of us get angry at being mistreated, fearful when we sense danger, and sad when we hear tragic news. What underlies all of these emotions, I think, is suffering — real or potential, past, present or future, personal or on behalf of those we care about. Suffering is a consequence of pain (though some would say not inevitably so). And there is a lot of pain in our overcrowded, overstressed, exhausted world.

In an article last spring I attempted to lay out a strategy for avoidance of and coping with triggers. I have tried very hard to apply it. To my credit, I think I have become much better at recognizing when I have been triggered, and the direct cause (event or action) and indirect causes (traumatic events in my past, feelings of incompetency etc.) All of these ’causes’ are, of course, stories (about myself, others, the past or the future) and all of them, as people like Tolle and Richard Moss will tell you, are inventions. That doesn’t mean the trauma wasn’t real or the feeling isn’t valid — it just means that what is causing suffering now when a triggering event occurs is our own intellectual and emotional processing — the stories we create to explain what happened and why, what will happen and why, or what we believe is true and why, and the negative emotions that these stories immediately provoke.

So, for example, when someone suddenly cuts in front of me in traffic after shouting ‘asshole’ in my window and giving me the finger, a flurry of negative emotions are provoked by the stories I immediately invent about this event:

What I am not good at is preventing myself from getting triggered at all. As I move to prevent and avoid situations (and people) who I think are likely to trigger me, I find that as the situations that can trigger me get (on average) tamer, my sensitivity to them is actually increasing (perhaps due to lack of practice). So (what I perceive as) a mild personal rebuke now triggers me more than it used to.

And, worse, when I get triggered, the process I prepared for myself, and try to practice, to cope with the trigger, is not working at all. This process is:

In reality, after doing step 1 I tend to jump directly to 4. I can’t help myself. And the problem with that is, by discharging what I feel too quickly and emotionally, I can trigger others, creating a vicious cycle of triggering. It can take me a long time to get around to 2, and if I were to be honest with myself, I probably don’t really do 3 or 5 at all.

The theory behind the ‘discharging’ step is the argument that all wild creatures do this after a stressful ‘fight or flight’ incident. They explode with anger. Then, immediately, they ‘shake it off’ physically — you can see this in animals that have just fought or just escaped danger. And then, supposedly, it’s done, forgotten.

Except it doesn’t seem to work that way for humans. Perhaps our brains get in the way, or perhaps our bodies are just not yet well-adapted to the types of triggers and stresses we face in modern civilization. In his book You Are Not So Smart, David McRaney cites studies that suggest that catharsis — venting our anger — does not discharge it at all, it keeps it in our system, and makes us more aggressive and more prone to seek ways to vent our anger when the next situation arises. Perhaps this is because of our egoic minds (it is doubtful most other creatures waste their time inventing stories about others’ motivations) — another facet of being ‘too smart for our own good.’ McRaney explains:

Catharsis will make you feel good, but it’s an emotional hamster wheel. The emotion which led you to catharsis will still be there afterward, and if it made you feel good, you’ll seek it out again in the future… Smashing plates or kicking doors after a fight with a roommate, spouse or lover doesn’t redirect your fury, it perpetuates your rancor. If you spank your children while infuriated, remember you are reinforcing something inside yourself. Common sense says venting is an important way to ease tension, but common sense is wrong. Venting – catharsis – is pouring fuel into a fire… [Instead, cool off]: delay your response, relax or distract yourself with an activity totally incompatible with aggression.

McRaney sites other studies that suggests catharsis (crying) often doesn’t help people recover from emotions of sadness, either — especially if it’s ‘protest crying’ — a plea for help rather than an expression of sadness.

But how are you supposed to start by ‘cooling off’ when your emotional reaction — the anger, fear or sadness you feel — is so powerful, so overwhelming that it just comes out, spontaneously?

There are a lot of sometimes-conflicting views on how to ‘manage’ the emotions that these triggers evoke:

But none of this really answers the question: What can you do if you can’t ‘help yourself’ from immediately (non-violently) discharging your feelings of anger, fear or sadness, when there is (apparently) no cathartic benefit to doing so — in fact, your discharge may make you feel worse, may trigger others, may provoke additional or more extended negative emotions in you, and may increase your tendency to seek similar (unhelpful) catharsis in future recurrences?

In the diagram above I propose two ‘self-healing interventions’ we can try to invoke in the moment when we feel ourselves being triggered. The first entails changing the story we tell ourselves, either by finding a more benign one (in the case of anger or sadness triggers), or by having a ‘reality check’ on whether the threat is real and what mitigating steps we can take immediately to reduce it (in the case of fear triggers). The second entails, as McRaney suggests, delaying response (just giving it time), using relaxation techniques, or distracting yourself with a peaceful activity. I suspect this second intervention works best for anger triggers and is less effective for fear or sadness triggers.

Neither of these interventions is cathartic. But neither can (in my experience anyway) be invoked quickly enough to prevent the immediate response to the triggered pain — the created stories that explain what happened, and the negative emotions those stories evoke, in a vicious cycle. It’s fine to heal the damage through interventions after it’s happened, but isn’t there any way to prevent the pain responses (stories and negative emotions) from arising in the first place, with all the commensurate damage they can do?

Or is it just natural (and human nature) to react cathartically first and try to heal later? Our our primal “fight-or-flight” selves that badly maladapted to our modern culture and its triggers?

Anyone have any thoughts on this?

7 Responses to Coping With Triggers