The Occupy Movement: Don’t Tell Us What To Do 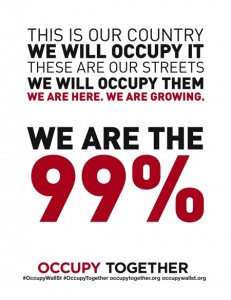 Everyone, it seems, has advice on what the Occupy movement should do next, in the face of winter, dwindling and hostile press coverage, flagging public support, volunteer burnout, and police raids and brutality. We’re all armchair strategists at heart.

The corporate-owned media have worked furiously to discredit the movement by portraying us as dangerous, dirty, and aimless, and by dwelling on the kind of mundane events that inevitably occur in all large unorganized groups operating in public spaces: fights, drug use, petty crime, fire hazards, waste disposal etc.

Criticism of the movement is now coming from some progressives as well, who compare Occupy’s relatively small numbers and unfocused strategies with those of the Arab Spring uprisings and those of our sister Indignant movement in Europe (here is just one week’s remarkable schedule of events, venues and issues addressed by the Madrid, Spain Indignant movement, for example). These critics also argue that Occupy’s biggest challenge is winning over the rest of the 99% and getting them to join us in outrage and solidarity (this is much harder to do in North America, where the 99% is less informed and engaged in the political process than those in other parts of the world).

All these criticisms miss the point.  The Occupy movement has already accomplished an enormous amount. The people attending the general assemblies and camping out with others are creating a vital basis for long-term solidarity, and learning a huge amount about how the world really works, about consensus and cooperation, about self-organization, and how to create and live together in community. We are learning that we don’t have to put up with systems plagued with corruption, inequity and rot. We have learned that it just might be possible to create something new, together, to replace the systems that are crumbling, systems which do nothing for us and which are destroying our dignity, our humanity, and our world.

But we are just starting. As Matt Taibbi brilliantly points out today, we don’t know what we want. We just want the rest of the world to know that we’re outraged, and fed up with the 1% controlling our lives and our government and our economy and our media, and we want to urge the 99% to join us as we begin to begin to figure out what to do about it, now that we know the existing power structure is not going to do anything for us.

We don’t want to be led. We don’t want anyone in control. We don’t want anyone to speak to the media or governments for us or to represent us or make decisions for us. We’ve tried that system and it doesn’t work, at least not for the 99%. We want to create something new, together. We have absolutely no idea what it is, or what it will look like, or how long it will take. We don’t need anyone’s advice as we figure it out. If you want to help, come and join us, but speak with us and not to us. And most of all, listen and help us get organized. And be patient. It takes time to co-create something new, together, as equals.

So, thank you, Occupy comrades, in the camps, the streets, the houses and schools and workplaces and wherever we rise to speak truth to power and work to begin to bring the corporate and political criminals to justice, to re-enfranchise and re-empower us and return dignity and equity and what’s been stolen from us, and to create better ways to live and make a living. Don’t listen to what others tell us to do. Together, in our own way, taking as much time as we need, we are figuring out exactly what needs to be done. They can tear down our tents, and fill the jails and courts and hospitals with our bodies, but the Movement is not going away. Keep the faith. En todo el mundo, la lucha está en la calle.

15 Responses to The Occupy Movement: Don’t Tell Us What To Do