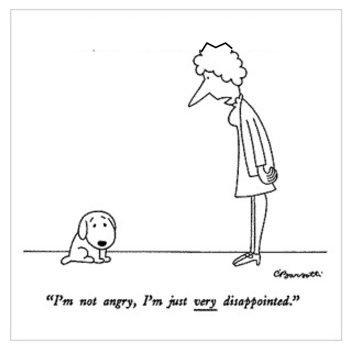 cartoon by the late charles barsotti; purchase his work here

All right, then, I will look at it. I will perform a laying of hands on it, and free it to become what it was intended to be. I will mind-meld with it, enlighten it. I will percolate it with my aura, blinding, iridescent waves of conscious awareness.

But still I know it won’t be enough. It doesn’t soar, you say. It doesn’t end world poverty. It does not make you desirable to others by whom you wish to be desired. It lacks resonance, purpose, value added, scintillation, the wow factor.

I bring it into the shop. I apply torque, and ratchet it up tighter. I mesmerize it, hold space for it, urge it towards self-realization.

Won’t do, you insist. It doesn’t sparkle, enchant. It cannot cut through steel, or broken hearts. It shudders when it hears the cries of children. It leaves calcium deposits, puncture wounds, a bitter aftertaste, unaligned chakras, emotional leakage.

I take it to the specialist, the guru, the wizard, the doctor of imperfect things, the one who surpasseth understanding. I am in tears now, pleading for improvement, repair, freedom from the pain, the injury, the injustice.

The all-knowing one blesses it, decrees it to be of the highest colour, beyond colour even, achieving perfect clarity, integral, transcendent, certifies it to be evidence based, results-driven, empowered.

But as soon as you see it, you frown. It still hasn’t provided global liquidity, you complain. Poxviruses continue to proliferate, everywhere there are locusts, sexual dysfunctions, redundant hashtags, celebrity scientologists, plagues of idealists, selfie sticks, reality tv, Facebook click bait, bad kerning. It’s not working, it’s worse than useless. Take it away, you demand.

So I do. I wrap it in feather down and steal it away, in my arms.

I return empty-handed, chastened, cleansed. I should have known better, I confess. I throw myself at your mercy. I genuflect, bow, drill holes in my forehead, scrub myself with baryons, admit to past indiscretions, libels, illicit thoughts about checkout girls, passive aggressive emails, minor felonies involving periscopes and bicycle seats.

You are inconsolable. It’s not that, you say, not that thing that you kept trying to fix. It’s you. You are the cause of the epidemics, assassinations, Davos conferences, stuttering, extreme sports, anomie, conspicuous consumption, high fructose, the polar vortex, genital warts, Nascar, geoengineering, excessive packaging, conspiracy theories, failure to achieve cold fusion, failure to achieve carbon sequestration, misused apostrophes, and fake liberals.

There is no defence for this. I failed to factor in the causes and effects, do the multivariate analysis. I ask how I should pay for this, what should be my recompense.

Accept responsibility, you reply. That is enough. Carry that weight. Push that rock uphill, and don’t stop. Wear a sign on your forehead, so everyone will know.

I sigh. This is much worse than I had feared. I had expected hanging, electrocution by faulty taser, lethal melamine injection, death by water. I had hoped for excommunication, banishment.