More on Plan C: A Clear, Actionable Platform for Those Who Care About Earth’s Future 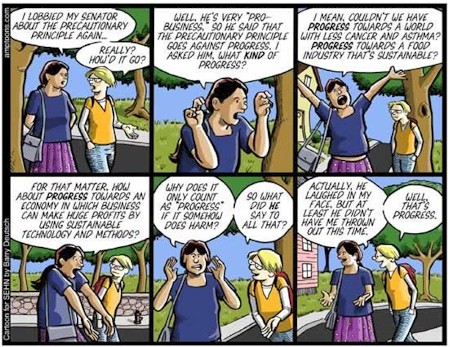 Cartoon by Barry Deutsch of Alas, A Blog fame, in ZMag.

Back in February, I wrote about the frustration of citizens being offered “stimulus” (to restore “growth”) and “austerity” (to reduce debt levels) as the only choices for an economic platform, and why both of these “options” will only accelerate the pace of collapse of our economy and our civilization culture. I concluded the post by proposing a 4-point alternative platform I call “Plan C”:

There are some other things governments can do to conserve resources, relocalize administration and services, de-layer bureaucracy, shift health care from treatment to prevention, overhaul and radically scale down the domestic security and prison systems, and deschool our communities, but these are trickier reforms that will need to be done carefully or they’ll just be done badly and make matters worse.

The longer-term answer, I think, is to move towards a radically decentralized, steady-state economy. But I think it’s idealistic to think we’ll ever have the luxury of doing that. The storm ahead will be fierce, and we first have to stop the austerity and stimulus advocates from sinking the economic boat before it even begins to navigate the rocky and narrow strait between collapse through ruinous contraction and collapse through ruinous growth.

What can we, the people, do to create a political movement that has the 4 points above as its core economic platform? While they are radical, they are not at all difficult to do. Of course they will be opposed by the 1%, but why are we so afraid of that, and so cynical that any political group could stand up to the 1%?

Could Occupy and other social activist groups be a vehicle for this? I’m not so sure, simply because I get the sense that many social activists and many in the Occupy movement think the answer to our economic and social woes and injustices is to redistribute wealth and power, and are not at all opposed to the idea of “renewed economic growth” if it were more equitably distributed. Plan C would certainly free up government money for social programs, but much of that saving does need to go to reducing the impossible debt loads we have foisted on future generations, and Plan C will also make many things, including many essential goods, considerably more expensive (without the current subsidies), as they should be — it’s time we started paying the real cost of the desolation we are creating on this planet.

And Plan C wouldn’t offer a panacea solution to government and corporate corruption, money’s influence on the political process, or pursuit of personal and corporate profit over the well-being of all. There is no simple or reliable ‘solution’ to these unintended consequences of size, centralization and globalization. It would be easy, in legal terms, to remove the personhood rights of corporations, and to mandate that profits be subordinated to social and ecological well-being in corporate charters and decision-making. But it would take more decades than civilization has left for the resultant regulations, litigation precedents and standards to evolve before these legal changes would have any significant effect. And that assumes we will have the funds and the political will to enforce them — some of the world’s most polluted and polluting nations have some of the strictest environmental laws now, but these laws are totally ignored.

If social activists and the Occupy movement wouldn’t support Plan C, would others? My sense is that those who would support this plan would have to answer ‘yes’ to all five of these questions:

I think in principle most people who call themselves small-l “liberal” or “progressive” or “green”, and probably most citizens in countries with high rates of literacy and learning, believe in paying fair prices, in pacifism, in social responsibility, in living sufficiently and sustainably, and in community and the need for de-institutionalizing our society. The problem is that in many countries they don’t believe most others would be willing to do the same. They think others will cheat to avoid paying fair prices, will exploit pacifism, will shirk their personal responsibility (cheat the system, jump the cue), will take more than their share (hoard, buy under the table, cheat on their taxes), and will pollute or waste with impunity (ignore regulations, bribe authorities, pay someone poor to take their waste). You can hardly blame them, when so many political and corporate ‘leaders’ exhibit such behaviour. And while they may acknowledge that self-directed learning, self-managed personal health and self-employment are good ideals, they are understandably unsure whether they could achieve any of these things themselves — our world has become so dependent on centralized, dysfunctional systems and organizations to provide us with these things.

To say ‘yes’ to the five questions above, and to support a political/social/economic movement that would institute Plan C, requires a double leap of faith: Faith that enough people will not cheat the system if it is made fair, even if it is not economically possible to catch and punish the cheaters; and faith in ourselves, that we can wean ourselves off our terrible dependence on the dysfunctional, crumbling systems we’ve come to rely on.

My sense is that the people of most affluent nations North of the 45th parallel (Canada, UK, Northern Europe), plus Australia and NZ, are prepared for such a leap of faith. Most of them, from what I can see, are increasingly disgruntled with both conservative and quasi-liberal governments, and historically have been culturally and philosophically trusting of their fellow citizens.

That puts them on a collision course with other nations, including the US and countries of Southern Europe, where corruption and distrust of fellow citizens have historically been higher, and cheating the system more a matter of indifference or even pride. Even in these countries the four points of Plan C could be huge levers towards equity, sustainability and financial stability (and these are the countries where these are most desperately needed). But I can’t see the political will for such a plan ever emerging in these countries — there is just too much cynicism and inertia.

That doesn’t mean we shouldn’t pursue Plan C in the northernmost and southernmost nations. It won’t save the world, but it would break the globalist/corporatist hegemony and provide a model of more responsible, more sustainable nationhood, so that the rest of the world could at least see there is another, better way.

It’s not really “progressive”; it’s more “beyond progress”. It’s more than “green”. It’s the political arm of the movement of people who care about this planet and its future, and are prepared to take whatever actions are necessary and helpful now to show it.

10 Responses to More on Plan C: A Clear, Actionable Platform for Those Who Care About Earth’s Future