This is some initial noodling on the subject of addiction, based on a conversation with, and some unpublished writing by, my friend Michael Nenonen, and some reading of the work of Vancouver academic and author Bruce Alexander. It may evolve into something more substantial. 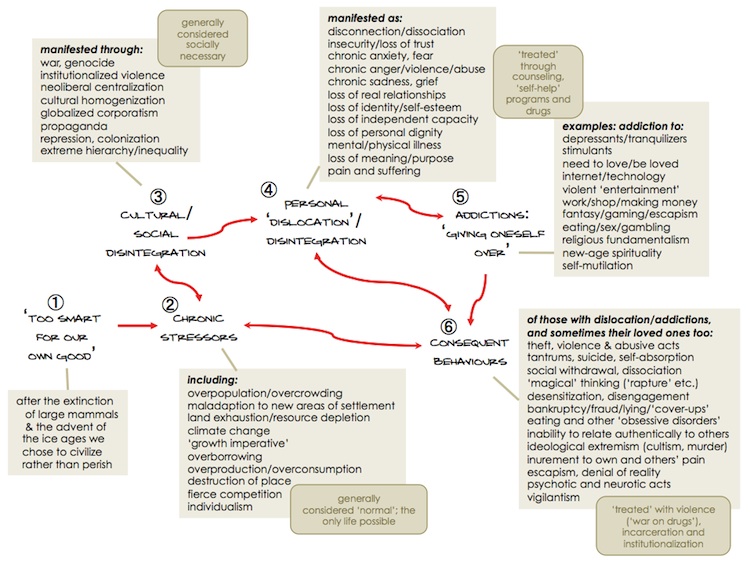 Suppose our unsustainable economy wasn’t in the early stages of complete collapse, and that we weren’t running out of the cheap energy on which our society totally depends, and that we hadn’t so screwed up our environment that we’d precipitated runaway climate change. Everything would be fine, right?

I’m beginning to realize that the psychological damage that our culture has inadvertently wrought on us all is probably more severe than the physical desolation we have wreaked upon our planet, and that even if we weren’t witnessing the end of the industrial growth economy, affordable natural resources and stable climate, we would still be witnessing the collapse of our culture. This article is an attempt to understand why that is so.

Vancouver psychology professor Bruce Alexander, who has spent a lifetime researching addiction, defines addiction in the original, broader, non-judgemental sense of “devoting or giving oneself over fully” — the term was originally used in the sense of slavery or monasticism, “giving oneself over” to a master. He argues that addiction, in this sense, is the natural adaptation or coping mechanism in the face of what he calls personal “dislocation” — “the rupture of enduring and sustaining connections between individuals and their families, friends, societies, livelihoods, rituals, traditions, and belief systems” — which are in turn a consequence of the larger collective disintegration or fragmentation of our society. These links are shown in steps 3-5 of the chart above: Social disintegration (3) yields personal disintegration (4) which we deal with by “giving ourselves over” to something pleasant or comforting — an addiction (5) – which helps us cope with the terror and pain that that disintegration produces.

There are a number of “consequent behaviours” such as theft, deceit, dissociation, fanaticism and suicide (step 6) that follow either directly from the addiction, or follow from the disintegration. Our complexity-loathing society lumps all these consequent behaviours together, filters out the positive ones, ascribes causality for all of them to addictive substances, pathologizes the addiction, and “treats” the behaviours with violence (as in our “war on drugs”), incarceration and institutionalization. The symptoms of personal disintegration are then generally viewed as illnesses stemming from personal weakness or character flaws, and (somewhat reluctantly) treated therapeutically and/or pharmacologically.

The “interventions” in this vicious cycle that our modern society attempts to interpose are shown in the dark brown boxes. We tend to prefer to deal with the consequent behaviours (and deal with them punitively) rather than the causes of these behaviours (which are more elusive, ambiguous, ‘blameless’ and controversial). At any rate, none of these interventions is effective — the vicious cycle continues to spiral out of control even as doctors and pharmaceutical companies get rich by pathologizing every addiction, and private incarceration corporations get rich dealing with the earlier-intervention failures.

As any student of complexity theory knows, you can’t ‘fix’ a positive feedback loop (a vicious cycle) by intervening at only one point in the loop — as Pollard’s Law of Complexity espouses, things are the way they are for a reason, and in a positive feedback loop the reasons are self-reinforcing and ‘players’ in the system will find ways to circumvent interventions intended to reverse them. So, for example, owners of fuel-efficient vehicles tend to drive them proportionally much more than owners of other vehicles, undoing any advantage of improving fuel efficiency in the hope of slowing the acceleration of oil consumption. And likewise, the so-called “war on drugs” has dramatically increased the street price of drugs (increasing the incentives for criminals to get into dealing, and for addicts to learn to self-manufacture them), clogged the prison system with drug consumers to the point it is bankrupting states, weakened nations like Mexico and Afghanistan with the capacity to produce drugs cheaply to the point they have become failed states, and produced huge spikes in violent crime — all without making a dent in the consumption of drugs.

But our propensity as a society is to try any ‘simple’ intervention, no matter its cost or effectiveness, rather than doing nothing and thereby acknowledging that the ‘problem’ is inherent in our culture and not solvable.

So now there is evidence that addiction has become endemic — that our culture has made addicts of us all. In some aboriginal and other severely-dislocated communities addiction to alcohol, pain killers, inhalants and other substances affects more than half the population. In Appalachia, for example, pain killer addiction is rampant, pharmacies in small towns are filling more prescriptions for them than some large cities, and adult addiction rates are reportedly as high as 70%. Similar rates have been reported in First Nations communities in Ontario. In some farm communities, where big agribusinesses have put family farmers out of business, crystal methamphetamine addiction is so widespread that “middle America” is now commonly called “Methland”. And in Siberia, where the economy is in ruins and organized crime has taken over both public and private enterprise, the average male adult life expectancy has fallen to 49 years (the average for Russia as a whole has fallen to 59 years) as a result of an epidemic of addiction to alcohol, Afghan heroin and other drugs — treatment facilities are so inadequate that average life expectancy from onset of addiction to death is less than five years. A Siberian ex-pat I spoke to a few years said that in her community the hopelessness of unemployment and poverty and the fear of criminal violence was so complete that virtually everyone in the community was addicted to heroin, alcohol and/or home-made narcotics.

How did we get this way? My study of history suggests that all civilizations collapse, because the model on which they are built is complicated and inherently fragile, so that as they scale up they become increasingly unsustainable and dysfunctional, until they finally crumble under their own weight. Our current civilization, sustained by two centuries of living off a billion years of stored easy-to-retrieve hydrocarbon energy, is larger than any we can study, global (no place to go any more to take the population pressure off or try to find more durable ways to live) and even more overextended than previous civilizations that have fallen apart. It is in the advanced stages of collapse, as the extreme level of all the manifestations shown on the chart above step 3 attests — war, inequality, centralization, cultural homogenization, propaganda and repression, all designed to keep a pressure-cooker lid on now near-universal dislike of civilization culture’s caretakers, apologists, proponents and exploiters.

This sad and desolating culture was created and built with the best of intentions: when early humans’ arrowheads, hooks and spears killed off most of the large mammals and devastated fish stocks in the areas most humans had come to live in (once we left the Eden of rainforest trees to ‘conquer’ the rest of the world), and that loss was compounded by the advent of ice ages that made most of the planet uninhabitable, our choice was to innovate or perish, and civilization, based on monolithic agriculture, the enslavement of other creatures, and a new rigid hierarchy needed to keep our swelling numbers in line, was our greatest innovation. Unfortunately, being a clumsy, complicated, unreliable, fragile and unsustainable invention, it produced the modern malaises shown on the chart below step 2, and hence created the stressful pressure-cooker of modern society and precipitated the social disintegration that has, finally and inevitably, made us all addicts.

What has begun now is a psychological “walking away” from civilization culture, similar but subtler (and much greater in global extent) than the “walking away” that immediately preceded previous civilizations’ collapses — If the majority don’t believe the prevailing culture is in the best interests of them and their loved ones, no amount of propaganda and coercion can hold that culture from crumbling.

Addictions, “giving ourselves over” completely to something, whether it be the rush of heroin, the distraction of  80-hour work weeks, escapist fantasy, the desperate clinging to ideological fanaticism and magical thinking, the belief in the Rapture or techno-Utopia or gurus or other forms of head-in-the-sand salvationism, are obvious ways of “walking away” from what we can no longer bear to face, accept or live with. They are coping mechanisms, and their ubiquity in humans is part of what has made our species such an evolutionary success. In my friend Michael’s words, addictions provide us with solace — comfort, soothing consolation, a reward to ourselves for putting up with the unbearable, terrible, soul-destroying desolated world we have created and are now watching the death-throes of (and with them, alas, the destruction and massive suffering of almost all the world’s creatures, which we’re taking down with us as precipitators of the planet’s sixth great extinction.

Bruce Alexander believes that the best possible solution to all this is to “domesticate capitalism”. He believes the dangerous part of our culture is the capitalist, corporatist, competitive, market-driven (rather than values-driven) economy that has evolved as part of it.

I’m not so sure. The main causes of the stress that is eating away our souls — overpopulation, overproduction, overconsumption, maladaption etc. — are shown below step 2 on the chart, and they are factors that have driven us to create the various types of economy that have prevailed throughout our civilization. Our economy is a product of our desperate culture, not the other way around. To ask us to ‘reform’ the economy that reflects opportunistically who we are and the situation we find ourselves in, is tantamount to asking us to change our basic human nature.

I don’t offer ‘solutions’ to complex problems — that is a fool’s errand. I believe the only possible effective interventions in complex systems, and their effects are likely to be modest, local and temporary, are the ‘intercessions of a thousand small sanities’ earlier in the vicious cycle, at step 2, that Adam Gopnik described in the the New Yorker earlier this year and that I have been writing about since. Such intercessions are based on local knowledge and self-knowledge, and in the case of addictions might include decriminalization, and redirecting “war against drug” funds to one-on-one personal interactions that can help build social ties and find, at least, less destructive addictions — things one can “give oneself over fully” to that are wholesome, healthy and even helpful. This is hard, thankless work that must be persevered at, and it doesn’t ‘scale’ up the way the horrible “solutions” of mass incarceration, institutionalization and pharmacological “treatment” do. But such intercessions are, I believe, the only “treatment” for disintegration that can have any enduring effect, especially as they are paid forward.

As Bruce Alexander says, “giving oneself over” to something is not necessarily a bad thing, changing our focus from “solving” addiction, to useful intercessions in a complex and self-reinforcing cycle of phenomena, would require us to stop moralizing about addiction and start understanding what motivates it, and that we are, recognize it or not, understandably addicts every one.

As we begin to see addiction as a useful coping and adaptation mechanism in our fucked-up world, we may begin to see “addicts”, including ourselves, in a clearer and more empathetic light. We may start to think differently about the homeless, looking for “bus fare” and “money for a hamburger”, and about the co-dependents in abusive relationships. And about the teenagers who self-mutilate, the women who starve themselves, the people drawn to simplistic cults, our own family members and friends quietly wrestling with addiction’s demons and our society’s disdainful and dismissive view of them, and the many of us in denial about our own, and our society’s, addictions.

That would be a start, I think.