In Praise of the Unexamined Life 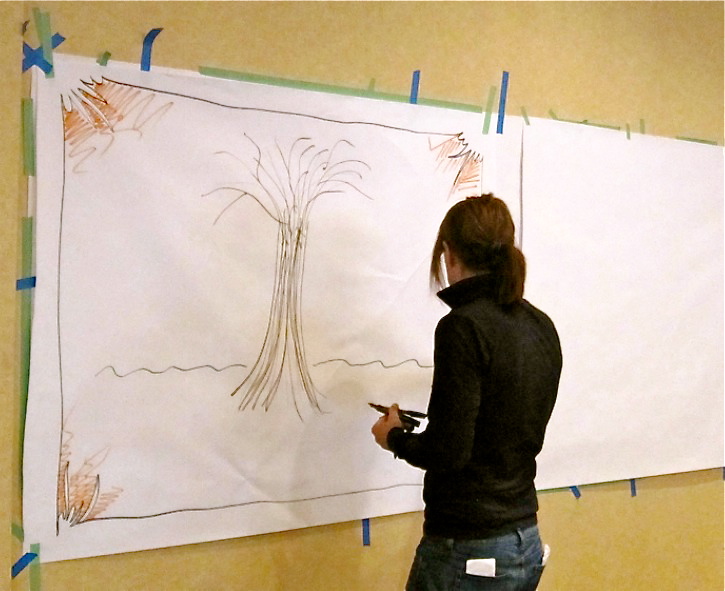 ‘us’ at work (photo by nancy white)

In recent years, this rambling blog has had two main focuses: (1) Trying to better understand how the world really works (and why as a result ‘saving’ our civilization culture from collapse and saving the world from the sixth great extinction of life is impossible), and (2) trying to better understand the essential nature of humans (and specifically and in that context, the essential nature of one human, the author).

The first focus has allowed me to move past denial that we are inevitably headed into a very difficult few decades that will leave the way our species lives utterly changed, and greatly reduced in numbers. And it’s enabled me to appreciate that we should give up trying to reform/change our culture and our behaviour and instead learn to become more resilient as individuals and as communities, to be prepared for cascading crises and the eventual collapse of civilization in the decades to come. As a result, this blog has shifted from being a prescription for making a better world to a chronicling of civilization’s tragic but unavoidable collapse.

The second focus has allowed me to appreciate that, despite the disaster our species has wreaked on the planet and the massive suffering and horror we continue to inflict on each other and other living creatures, we have done this out of ignorance and fear and trauma, not out of malice. We are, I have come to believe, a fatally flawed species, not an evil one. An evolutionary misstep, this development of a brain too large and powerful for our own and our planet’s good. Our brain has, out of its extraordinarily expanded capacity for invention, violence and fear, deluded us into believing it is us, and disconnected us from our a-part-hood with our true selves and with all life on earth, with ghastly consequences.

In order to understand my own trauma, fear, anger, grief, detachment and disconnection, I have been studying the processes that make me ‘me’, examining my life for clues on how to be less fearful, how to reconnect, how to be present and more useful to the world. Socrates first postulated “An unexamined life is not worth living”. Few people would choose to disagree (and those who might probably have never heard of Socrates). And there is great joy and solace in learning.

But now I am not so sure Socrates was right. All this self-examination has led me to self-dissatisfaction (notably with how much of my life I wasted doing what I was told and thought was the right way to live, and how incapable I seem to be to let go of the world inside my head and simply be, here, present, in the moment). I’ve concluded that my ‘purpose’ for living is to play, to just be, to enjoy and share the incredible beauty and the astonishing ride that is life on this planet. But I ‘knew’ that when I was just five years old. A half-century of self-examination and work has brought me back to the same knowledge and beliefs I had when I didn’t think about things, just accepted what was. And now I appreciate this, what else is there to ‘self-examine’?

The first inkling that my self-analysis was a fruitless undertaking arose when I realized we cannot be other than who we really are. Our attempts at “self-improvement” and “self-actualization”, I have come to appreciate, can only lead to disappointment and self-approbation, and are useless. Still, I thought, surely there is benefit in self-knowledge, in knowing who we really are, at least so that we can get rid of all the ‘not-us’ stuff our culture has layered on us and become, once again, truly ourselves?

So I know, now (at least I think I do) that I am a complicity of my body’s cells and organs, not an ‘I’ at all but a ‘we’. ‘Our’ mind, which I used to think was me, is just an evolved feature-detection system for this complicity, enabling ‘us’ to protect ‘our’selves from danger, find food and other resources for ‘our’ well-being, and move the mostly-water-filled bag that contains ‘us’ around when that’s advantageous for ‘our’ survival. And much of the contents of this bag is bacteria and other autonomous creatures, each with its own DNA and sense of ‘self’, creatures that are so much a part of ‘us’ that without them ‘we’ would quickly ail and perish. And all of the contents of this complicity are transient, coming and going regularly, to be replaced with new components that once were part of other creatures, or other planets.

And I know, now (at least I think I do) that our culture, with the best of intentions to look after the well-being of the whole group of human-shaped complicities on the planet, has attempted (with considerable success) to occupy my (‘our’) feature-detection system with concepts that are completely unreal, and in so doing to compel me (‘us’) to behave in ways that are often in conflict with what my complicity is trying to compel me (‘us’) to do, with traumatic and dysfunctional results. So I am (‘we’ are) trying to take back my (‘our’) body/self and be who I (‘we’) really am/are/was before being colonized by human civilization culture. And that’s really hard to do.

But what does this knowledge and self-knowledge get me (‘us’)? In a recent review of John Gray’s new (not yet released) book The Silence of Animals (more about that in future articles) John says “To adopt happiness as a goal actually makes people less adventurous. Far better just to try to live your life in an interesting and fulfilling way. Looking for your true self invites unending disappointment.” He argues that we don’t need, and don’t benefit from, a ‘purpose’ in life, and would be better off trusting our instincts of the moment to do what seems interesting and worthwhile. The title of the book refers, according to one reviewer, to the wisdom of looking at the world silently as an animal does, not with a mind towards how it might be better, but rather as it most wonderfully is. This, importantly, does not at all preclude the use of the imagination, but rather the focusing of the imagination on the fullness of what really is.

How does one do this, saddled with a human mind restless to think about the past, the future, the possible, anything except the here and now? As one of the book’s reviewers, Philip Hensher notes, the book presents a paradox: “to suggest that a human being could develop the kind of animal, present-tense registering mind of silence that John explores may or may not be possible…. Is it not another suggestion of how the mind of man might be improved?”

Perhaps the key to presence is not meditative practice or mental discipline, but just a willingness to pay attention, to wrap oneself (one’s selves?) up in what our senses and imagination can perceive of what is and what is happening outside, all around us, now. Or as the old 1960s motivational poster put it “Stand still and look until you really see”. With the eyes of a falcon, or a five-year-old child.

14 Responses to In Praise of the Unexamined Life