The Rocky Transition to a Natural, Gift Economy 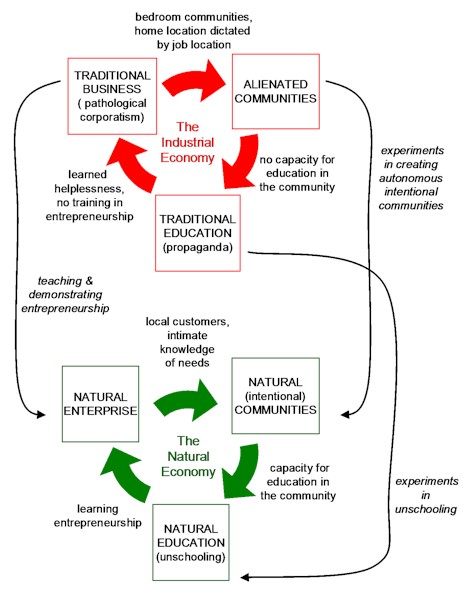 One of the things Ferananda Ibarra and Jeff Clearwater stress in their New Economy workshops is the importance of not framing the terms and concepts of this economy the same way the old Industrial Growth Economy is framed. It’s much like getting sucked into debating conservative or Orwellian terms like “right to life”, “entitlements” or “freedom” (as in “free” trade etc.) in the frames in which proponents of a particular worldview on these subjects argue from. Or trying to explain how to meditate using intellectual language. You’re at a disadvantage before you start.

So my first task is to create a new ‘frame’ to explain the New Economy, a ‘skin’ that it naturally fits within, instead of trying to explain it in terms of the Industrial Growth Economy’s vocabulary and core concepts. This will also help me explain (a subject for a future article) what community currencies are and why they’re beneficial and will soon be essential.

So now, immersed in the newspeak of neoclassical economics, we take for granted that “free” (i.e. unregulated, easily corrupted) markets are the ‘best’ way to allocate and distribute wealth and resources, that ‘private’ ownership and ‘enclosure’ (legally preventing others from accessing or using wealth and resources that used to be part of the Commons) are in everyone’s best interest, and are inalienable ‘rights’, and that ‘economic growth’ (i.e. perpetual, exponential increases in the use of resources, production of goods and creation of ‘wealth’) is inherently good for all, or at least for all humans.

To try to explain the New Economy to people who have accepted these (recent) ‘economic’ developments as the way things always have been, are and must be in a ‘democratic’ world, is immensely difficult. It is hard, when you’ve never known anything else, to conceive of a world without centralized ‘market-based’ economic decision-making, without (fiat currency) money, without ‘private’ property, and without debts. Depending on your worldview, such an economic world probably seems either anarchic (and dangerous) or utopian (and naive). No wonder discussion of the New Economy has so many people rolling their eyes.

The first thing we have to explain is that the Industrial Growth Economy that began in the 17th century and is now global in reach (and in political, philosophical and, some would say, religious acceptance) is a modern aberration, not the historical norm in human societies, and that most human cultures throughout history and across the world would find our acceptance of the Industrial Growth Economy unfathomable and pathological. What we’re talking about when we talk about the New Economy is, essentially, the economy (in its original meaning) of the vast majority of human cultures throughout history.

To explain this, we have to ‘reframe’ the terms and concepts of the Industrial Growth Economy into a New Economy framework.

Such a framework has no place (or equivalents) for some of the accepted and essential concepts of the Industrial Growth Economy: (personal or corporate) assets, wealth, capital and property, debts (liabilities), revenues and income, expenses, customers, suppliers, financing, marketing, and work. Instead, this framework is based on the concepts of the Commons, sufficiency, sustainability, well-being, stewardship and generosity.

There is considerable evidence that most indigenous peoples had no need for money, and consensual exchange between tribes (although such exchanges were apparently rare, since tribes were economically self-sufficient and often distrustful or belligerent) were not money-denominated or barter transactions, but rather arose from generosity and as a gesture of welcome. While there is much controversy about the degree to which indigenous peoples in various parts of the world recognized individual property rights, it is doubtful that they recognized them to the extent of modern property ‘ownership’, carrying with it the unrestricted right to sell, use exclusively, and protect (fence off, defend with arms) that we accept today.

Most indigenous tribes, from what I can see in my research, had established territories and a buffer zone between their territories and those of neighbouring tribes. These territories were Commons, not individually owned but stewarded collectively by the members of the tribe for the benefit of all members, to provide sufficient resources and well-being for all in a sustainable (ecological) way. This is an evolutionary success strategy in both human and non-human animal populations, one that our modern culture has forgotten.

Their ‘economies’, inseparable parts of their cultures, were simple: Steward and harvest enough, varied food, medicines and other resources for all members of the tribe to live comfortably even through periods of bad weather and poor growing conditions. Leave the land as you found it. Respect, even revere, the other creatures that play essential roles in the balance of the ecosystem and the food cycle. Don’t take what you don’t need. Live within your means. There was no ‘work’ in these societies, and the responsibilities of stewardship and harvesting generally took no more than an hour per day, leaving the rest of the day for leisure and self-invented recreation. (To be fair, this became less true the further the tribe migrated from the rich rainforest whence the human species first arose.)

It is hard to imagine transplanting such an economy to our modern, globalized culture. We no longer have identifiable ‘tribes’, communities or boundaries. We are not at all self-sufficient, and our massively swollen populations depend utterly on the theft (from the poor, from struggling nations, from our desolated natural environments and from future generations) and importation of huge quantities of complicated manufactured goods and raw materials, and on a fragile economy of just-in-time production and delivery that leaves no room for error or disaster, natural or man-made. The Industrial Growth Economy depends on the wage slavery of all, working at paid and unpaid jobs to eke out just enough to live an unhealthy, violent, fiercely competitive, endlessly stressful life.

Yet the New Economy already co-exists, uneasily, with the dying Industrial Growth Economy it will eventually replace. When we look after each other’s children, when we engage in philanthropy or volunteer our time, when we buy and trade at local community markets, when we share our tools, our knowledge (including expert scientific knowledge among peers), our ideas (online and at community events), our couches, our potluck meals and our files (Open Source), or when we donate used clothing and goods, we are creating and supporting the New Economy. In the process we are at war with wealthy, corrupt corporatists and privatizers and ‘enclosers’ using their media and lawyer mouthpieces to propagandize and threaten us so they can hoard and transfer yet more resources and scarce financial wealth from the poor to the rich.

This New Economy is occurring because, for an increasing number of people, the Industrial Growth Economy is now priced out of reach. The old economy increasingly depends on the rich, and corporations that receive billions in taxpayer subsidies through extortion, graft, bribery and theft, buying more and more stuff from each other, while most citizens can only participate at the marginal Wal-Mart level. Change in human societies generally occurs only when there is no choice but to change, and for the poor and disappearing middle class that time has come, and the New Economy is taking over. Those now living increasingly in the New Economy realize that record Dow Jones market performance is not a sign of economic health, but of the inequality of wealth and the volume of over-priced trade among the rich, their lackeys and apologists and addicted dependents. They realize that real rates of inflation and unemployment are 2-3 times the ‘official’ political rates, and that they will never decline, because the Industrial Growth Economy offers no solution for either problem.

And it is just beginning. Look at your monthly expenditures and you will probably discover that most of your money (rent, financial and consumer purchases) continues to support the Industrial Growth Economy. But as the housing market collapses, as governments run out of money to pay for financial corporation bailouts and subsidies and the big financial institutions and subsidized corporations collapse, as oil costs and climate change events make massive movement of goods uneconomic and import/export markets seize up, driving large centralized corporations out of business, you will find, slowly but surely, that you are more and more a part of the transition to the New Economy.

What will that New Economy look like, once the transition is substantially complete in a few decades? Here’s what I foresee:

Our tribal natures, encoded for a million years in our DNA, will probably re-emerge. But just as in times of crisis humans tend to pull together and help each other, my guess is that this new tribalism will take a while to reassert itself — possibly until population has dropped enough to provide space between communities and communities have developed a strong sense of loyalty and identity.

Or possibly not. Inter-tribal warfare predates the Industrial Growth Economy by millennia, and we can only speculate on whether it was rare or endemic, and what precipitated it. There are arguments that we have inherited the belligerent genes of our chimpanzee cousins rather than the more peaceful ones of our other cousins, the bonobos, and that we slaughtered our hominid Neanderthal cousins to extinction long before the discovery of agriculture and the possibility of ‘permanent’ settlement. So while we might make the difficult transition to the New Economy, our ability to transition to a new, peaceful political society is a different issue. There is some evidence that human societies have worked to create nations in part precisely for the purpose of reducing inter-tribal strife. Yet those nations have yielded both inter-national and internal wars that dwarf in scale and ferocity the battles between pre-civilization tribes.

That’s the paradox we’re going to face in the coming decades. There’s lots of evidence that humans, prior to the Industrial Growth Economy, were capable of evolving economies of abundance, peace and leisure within tribal groups. But there is little evidence that we have been successful at evolving political systems and cultures that allow these thriving tribes to co-exist with each other.

That shouldn’t stop us from working to enable a transition to the New Economy, community by community around the world, and to help undermine and end the Industrial Growth Economy that is desolating our world and has imprisoned us all. But it should give us pause to wonder whether this is enough, and whether, despite our economic ingenuity and evolutionary capacity, our fierce political nature will yet get the better of us, and undo us all.

8 Responses to The Rocky Transition to a Natural, Gift Economy