Relearning to Love the Wild 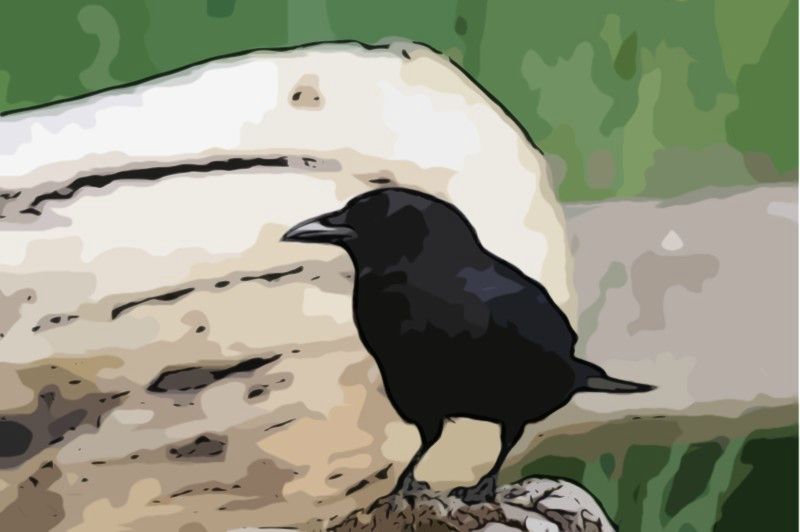 photo, and photoshopping, by the author

Seattle’s Lyanda Lynn Haupt’s book Crow Planet is a description of the experiences and feelings she brings to her work as an “urban naturalist”, someone who studies and appreciates nature (“the more-than-human world”) from within the city. Crows feature in it prominently, in part because crows, like humans, have been so successful at adapting to different environments because of their intelligence that they have damaged the ecological diversity almost everywhere they live — and they live everywhere humans do. And in part because, as Lyanda says, “everyone has a crow story”.

But ultimately the book is not about crows, and it takes some wild (but always interesting) tangents from the subject of its title. It’s really about our connection with the more-than-human world (that term is not meant to deprecate humans, but to include them). She starts with this proposition and question:

There is a way to face the current ecological crisis with our eyes open, with stringent scientific knowledge, with honest sorrow over the state of life on Earth, with spiritual insight and with practical commitment… Our actions can arise from a state of rootedness, connectedness, creativity and delight. But how are we to attain such intimacy, living at a remove from “nature”, as most of us do, in our urban and suburban homes?

She then tries to answer that question by telling her own naturalist stories, as an award-winning nature writer and lifelong ornithologist. These stories inevitably include her young, curious and sensitive daughter, and it is the daughter’s reaction that brings us face to face with our own disconnection with the wild — creatures and places that are untouched, undomesticated and undamaged by civilization, and our own, buried, untamed selves. She claims that anyone can relearn to love the wild through the practice of naturalism — elements of that practice include: thoughtful study, learning to identify wild creatures, patience and perseverance, a respect for wildness, attention, purposeful witnessing, developing a personal focus, diligent note-taking (and/or sketching), and allowing time for solitary naturalist activities. She writes:

Attempting to read crow lives attunes my eyes to this quieter, penciled world — its stories, its struggle, its needs. It inspires me to watch for the next layer, and then the next. In our urban watching, we learn to remain alert to the presence of the wild on Earth, to grow an awareness that is an essential counterbalance to the isolating loss of wild knowledge [and connection] that urban and suburban living so typically brings.

As a lifelong birdwatcher and studier of bird behaviour, I can see her point, but while I agree that such a practice is rewarding and enriching (and entirely possible in the city), I’m not sure it’s enough to enable many to relearn to love the wild. Lyanda clearly is a biophile, but my sense is that many people, deprived of contact with nature in childhood, grow up never appreciating what they’re missing.

Beyond that, I think there are many others who, because of either early childhood stress or chronic stress in their lives, are so ‘disconnected’ from themselves and the world they live in, that they can’t really offer the authentic attention to the more-than-human world (or even, in many cases, the human, civilized world) needed to appreciate it, connect with it, and heal with that connection. There is a theory (called the Attention Restoration Theory) that postulates that we are capable of two kinds of attention: Directed attention (focused, intellectual attention) and “Effortless” attention (unfocused, appreciative, holistic attention), with the former dominant in indoor activities and the latter prevalent outdoors. (Interestingly, this theory is consistent with my theory that we experience two types of “presence”, intense intellectual “clock time” presence and instinctual, relaxed “now time” presence.) Attention Restoration Theory holds that the former is exhausting and can lead quickly to “directed attention fatigue”, while the latter is restorative, allowing us to regenerate our capacity for genuine attention. My guess would be that the absence of contact with wild creatures and places, and/or high levels of stress that cause us to disconnect from the human and more-than-human world, can make both genuine attention (presence) and biophilia unattainable for many people.

Gabor Maté has worked with severely addicted, chronically ill, damaged and dysfunctional people in the poorest areas of Vancouver, Canada, and his theory is that essentially all of these people (and most of the rest of us) are suffering, to a greater or lesser extent, from a lifelong disconnection or “detachment” from our authentic selves and from others and the world in which we live, brought on by a lack of secure attachment to our parents or caregivers as very young children (due to trauma, loss, neglect etc.) or other severe early stress, and that consequently most of our chronic illnesses (physical and emotional) are attributable to understandable but ultimately damaging coping mechanisms we have put in place to protect ourselves from this absence of secure attachment and the loss of our sense of authentic (i.e. in touch with itself and aware of its own needs), empowered, self.

This theory seems quite credible, especially when you listen to the stories of those suffering most in our modern society. But it raises a couple of questions that I haven’t heard answered satisfactorily:

In my own case, my mother was traumatized by an abusive father (I found this out much later in my life), and so, while she was very attentive when we children were young (to the point of self-sacrifice), she found her life increasingly hard to cope with as she got older, and left us to our own devices while she fought the noonday demon of depression. She died young, at 59, of cancer. My father was just a typically (for the era) busy man, working long hours and weekends to make a living and support his family; he was around when he could be, and did take us to his office on weekends (a printing company, in the age of “hot type”, which I found fascinating), and on fishing and sightseeing trips in the summer. He died in 2010, of Alzheimer’s complications, at 85.

My early (pre-school) childhood was pretty idyllic — it was my school life (lying and sadistic teachers, cruel and manipulative schoolmates, and horrifically bad curricula and teaching), and later work life (hard, thankless, terrifying, exhausting, disempowering, incompetent, and sometimes abusive) that traumatized and disconnected me. My parents did their best to help me manage it, at least in early grades, but they were busy and could not possibly know how my sensitive soul was suffering; nor could I articulate it well. Combine that with a poor diet as a teenager and young adult, and the consumption of high doses of oral tetracycline for many years (the preferred treatment for severe acne in those days), and it’s no surprise that I dealt with depression much of my life and have more recently suffered from ulcerative colitis. Small wonder it hasn’t been much worse. That’s perhaps thanks to good genes, caring, attentive parents in early childhood, and recently, healthy changes to my lifestyle.

But I am still fear-driven, and still disconnected. Disconnected from my (amazing) instincts and my emotions, from my body’s messages and wisdom, from other people (I’m wary of most people, borderline misanthropic), and from the more-than-human world (I love nature, conceptually, but given how much opportunity I have now, and have had, to do so, I spend surprisingly little time immersed in it, and am in many ways afraid of it). I’m learning to enjoy, in moderation, walks in the woods and the rain, spending days outside (but close to the comforts of home), and visits to safe, warm, tropical places. I’m practicing meditation more often, though I’m not sure of what it’s doing for me. And of course, I love watching birds, photographing them, learning about them, hearing stories about them, and imagining what it would be like to fly (while stepping out on the balconies of high-rises makes me queasy, even as I am enticed by them).

And although I’m capable of exceptional focus and accomplishment during some periods of directed-attention “clock time” presence (you know, those moments when you feel, and others tell you, you are “really on”), my moments of effortless-attention “now time” presence are still, sadly, rare, and far from effortless, and they’re usually indoors and at night (listening to music, or sparked by candlelight, firelight, or the light of a warm body). I want to relearn to love the wild, and I certainly talk a good story about it, but it still seems far away, so impossible I feel I should let go of it and turn my attention to more attainable wants.

Living on an island, with forest and ocean all around me, I can no longer claim to be “removed” from nature. But still, it is as if nature, most of the time, is something in another dimension, and as much as I long to embrace it, to be a part of it, achieving that desire eludes me, and I know that is because of what is going on, and not going on, inside me. And I despair that that will ever change. Knowing why I am disconnected does not bring connection. And knowing that this amazing passage from the conclusion of Crow Planet is true, and wonderful, does not enable me to really feel it, or to follow its advice:

I wonder, what does it mean to have no hope when there is a radiant, Earth-loving child singing in your bathroom, and a broken-legged bird that has learned to fly in your tree? Still, it seems that the best prospect for a flourishing, ecologically vibrant, evolutionarily rich Earth would be a massive, brutal overturning of the human population followed by several millennia of planetary recovery. Surely this doesn’t count as hope. But here we are, intricate human animals capable of feeling despair over the state of the Earth, and simultaneously, joy in its unfolding wildness, no matter how hampered.

What are we to do with such a confounding vision? The choices appear to be few. We can deny it, ignore it, go insane with its weight, structure it into a stony ethos with which we can beat ourselves and our friends to death — or we can live well in its light.

I doubt that I’m the only one struggling to figure out, especially now, how to live well in its light. Crow Planet is a heart-warming, entertaining and illuminating book. If it’s a true story, I envy the author for the connection she’s found, or perhaps always had. For some of us, perhaps most of us, such connection is and may remain, elusive, even impossible, no matter how much we long for it and how much our weary brains say “Yes!”.

Now I’m going outside to sit, with a cup of tea and a cushion and a notebook, and watch the crows, and see if they will tell me what no human can.

6 Responses to Relearning to Love the Wild