A Cynical Theory of Power and Organizational Dynamics 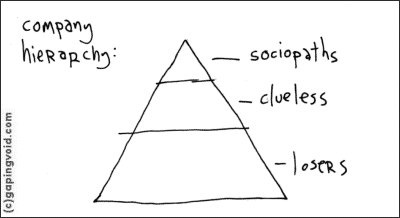 from GapingVoid.com by Hugh Macleod

I‘ve previously mentioned that the most important thing I learned from 37 years in the business world is that in large organizations of every kind, almost all valuable work is done by workarounds, i.e. people on the front lines doing what they know is best for the organization, even when this ignores or (often) contravenes what they’ve been told to do (or not to do) by senior executives. Or which contravenes the executives’ surrogate, the policy and procedures manual, which is now substantially embedded in the software these poor front-line employees have to use, and which forces them to tell you “sorry I am not authorized to do that for you; is there something else I can help you with today?”.

This is a cynical view, but it actually makes sense when you understand the nature of complex systems. No one can know what to do or how to effectively intervene in large, complex systems — there are far too many variables, too many moving parts, and too many unknowns, and the further removed you are from the customers, citizens or clients of the organization, the less likely you are to know what they want or need, or the cost/benefit of giving it to them. The belief that ‘experienced’ executives, ‘experts’, consultants or other highly-paid (often obscenely so) people know anything more about what to do is sheer hubris.

As Charles Handy has pointed out, modern capitalism (and the modern organizational model) are inherently anti-democratic. He also noted that, as any student of history can tell you, nobody gives up power voluntarily. And as Joel Bakan’s The Corporation explained (and Hugh Macleod’s cartoon above satirizes), large profit-driven organizations are necessarily pathological. 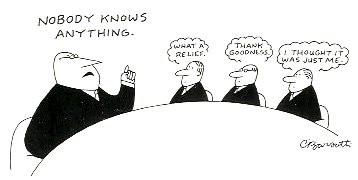 So how does this weird power dynamic in organizations arise? If hierarchy is so unhealthy, why is it the prevailing model in almost all human social systems and organizations?

My theory is that it arose to exploit the fundamental human loathing for complexity and the fear-driven desire to believe that everything can be controlled. Shareholders don’t want to hear that “nobody knows anything”; they want to know that their investment is going to rise in value.

As organizations grow in size, they inevitably grow exponentially more dysfunctional. Paradoxically, this growth also conveys the power to outspend, out-market, and acquire smaller, more innovative, more agile, customer- and citizen-focused organizations. Acquisitions of small companies by larger ones almost always destroy value (any honest M&A practitioners will tell you that ‘economies of scale’ don’t actually exist — what exists is ‘power of scale’ — and oligopoly). Similarly, the prevailing neoliberal ideology (under which lies this loathing of complexity and diversity and the desire for everything to be simple and standardized) has led to the centralization and amalgamation of small organizations, schools, hospitals and municipalities into massive, dysfunctional, hierarchical ones, in the mistaken belief this is somehow fairer and more efficient.

What then arises in hierarchical organizations is a strange co-dependence between those at the top (with the power and wealth) and those at the bottom. To reach the top in large complex organizations (if you buy my ‘workaround’ argument above) requires a sufficiently large ego and hunger for power to be willing to self-promote, lie, betray, and claim credit for the work of everyone else, and shift blame for failures elsewhere.

Only sociopaths have the right stuff for this. But they hold this power with the collusion of the ‘clueless’ middle-management underclass beneath them. If you are in a comfortable middle-management position (most likely doing completely valueless administrative and pencil-pushing work), you live in fear of making a mistake that would allow your sociopathic boss to fire you. So basically you don’t want to have to make any decisions for yourself. You want the boss to tell you what to do and how to do it. And that’s exactly how the sociopath bosses like it. The system of collusion self-perpetuates. It’s precisely analogous to the co-dependence that evolves between sociopathic, abusive parents (usually men) and their victimized family members.

So what about the ‘losers’ at the bottom, the ones actually doing the workarounds to serve customers, citizens and clients that actually have some value? Up until a generation ago, they fell in line beneath the middle-managers for the same reason middle-managers kowtow to ‘executives’ — job security.

But now there is essentially no job security, nor ‘upward’ mobility, in the workplace or anywhere else in our society. There are already too many middle- and upper-level people earning too much money doing nothing of value, in every system in our society (corporations, schools, government administrations, even large non-profits and NGOs). These systems have all ‘grown’ not through innovation and smart management but by exploiting cheap resources, cheap foreign labour, and (as social and labour rights are eviscerated) cheap, desperate domestic labour. So now the front-line people, realizing there is no future for them in the organizations they work in, change jobs often and indifferently, relearning the essential workarounds in each new organization they join. They couldn’t care less about the rot above them in the organizations they work for. They are already, essentially, as ’employment’ benefits have all but disappeared, independent contractors.

They are still doing just about all the work of any value in our society.

It’s a very sick, and unsustainable system, and it mirrors the malaise in our overall society.

And there’s one other factor that makes the picture even worse: Nearly every study of factors that correlate to high rates of crime has identified inequality of wealth and power as the factor with the highest-correlation: in organizations, municipalities and nations with a few obscenely rich and powerful people and a massive underclass, crime is inevitably high. Once inequality and crime reach a certain level the entire political, economic and social fabric of the entity starts to break down.

Paradoxically, when these systems collapse, the propensity of most people (being change-averse and ignorant of any alternatives) is to try to recreate what has been irreparably broken. You see this in many countries which have ended up with worse regimes after collapse than the ones that preceded it. Executives who presided over organizations that collapsed end up, over time, in charge of other organizations. We keep perpetuating the madness.

When I became involved, after retirement, in the development of Group Works, the pattern language for more effective group process, I was keenly aware of this propensity, and of the ghastly, prevailing power dynamics (and the ignorance of other ways of being, working and collaborating with other people in groups) working against the emergence of better models of behaviour.

I was therefore not surprised to discover how huge a challenge it is for many organizations to consider processes and tools that are inherently egalitarian and that mandate a power shift from those at the top (who see ceding power as a sign of weakness), to those in the middle (who don’t want the responsibility that comes with power) or the bottom (who raise their eyebrows at any suggestion that any real shift of power to them could ever happen, and who feel more like temporary contractors than employees in any case).

Let me temper my characterization of people struggling with this dysfunctional power dynamic a little. I appreciate that we’re all doing our best, against truly dreadful odds — our horrifically overpopulated, desolated, resource-exhausted planet has left almost everyone damaged, malnourished and starved (in one way or another), and overworked, and hence to some extent mentally ill and struggling to heal themselves and those they love and care about. Even the psychopaths cannot be other than who they are, and they have often suffered from abuse in past as bad as, or worse than, the suffering they now inflict on their co-workers, families and communities.

The political, economic and social systems we now struggle with have evolved in this atmosphere of illness, suffering, desperation and imaginative poverty. Our change-aversion is understandable, and sometimes it is just easier to be ‘clueless’ or walk away than try to change a system that has ‘successfully’ evolved to defeat all attempts to reform it, even if in the longer term it is unsustainable and will inevitably collapse on its own.

I don’t believe these systems, institutions, governments, or our entire industrial civilization can be reformed, and I’ve long ago resigned from trying. Cultures (of organizations or societies) evolve as the collective expression of their members’ beliefs and behaviours; they cannot be created, re-created or reformed.

But in the spirit of my Resilience Framework I think there is great value in us having a conversation, even while struggling with our industrial civilization’s oppression and impending collapse, about how we can realize what is actually happening, act at a local level to help ourselves live with and heal from its excesses, and begin to liberate ourselves from its clutches.

To that end, I think Group Works is an enormously valuable and important language, possibly the most important thing I have ever had a (small) hand in creating. It’s valuable not because it will or can help large organizations become more egalitarian and shift their power dynamics, but rather because it is a language of authentic connection with, peer-to-peer collaboration with, and empathy for others, a way of saying things like “I hear you”, “I value what you say”, “I agree”, and “Let’s help each other deal with this.”

Our existing languages (despite their fascinating etymological roots) have evolved to be instruments of power — tools to convey instruction and command information, to coerce, to oppress, to obfuscate, and to mandate and ensure obedience to hierarchy and established processes, no matter how dysfunctional they may be. These languages are ill-suited to the nuances of expressing how things actually work in complex situations, or appreciation of ambiguity and uncertainty, or the value of incremental adaptation (workarounds) instead of ‘decisive’ action.

You don’t hear these words much in the industrial workplace, but if you listen, you’ll hear them more and more in the communities and groups that are working around it. There’s a shift happening, a new foundation being created for the world that will be left when the old one crumbles away.

If we’re fortunate — if we have the time to heal, prepare, rethink and experiment, the wisdom not to try to replicate old failed systems, and the self-awareness and imagination to appreciate what is good for us (and all other life on Earth) — this new foundation will have a very different, natural, ancient power dynamic. Never too early to start to develop the language to do that.

Thanks to Cecile Green for the ‘power-full’ discussion that prompted this article. She does not share my cynicism.

This entry was posted in Preparing for Civilization's End, Working Smarter. Bookmark the permalink.

25 Responses to A Cynical Theory of Power and Organizational Dynamics