Thoughts About Not Thinking 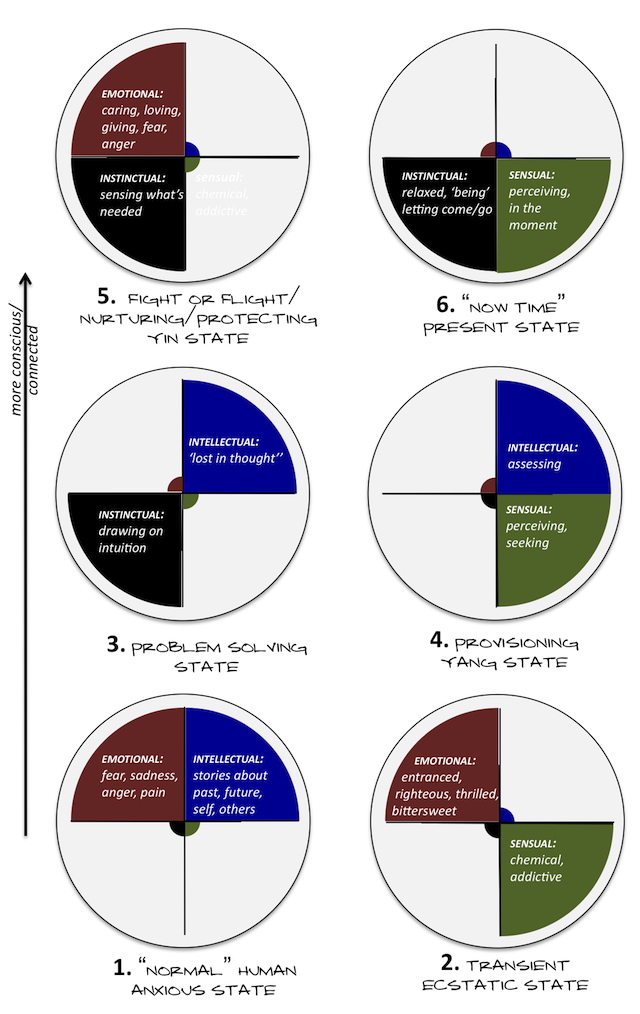 This is another thinking-out-loud update on my “presence” practice — my attempt to awaken to the realization that “I”, the mind, time and the separate self are all illusions, and an appreciation of why these illusions, which cause so much unnecessary suffering in our world, are so prevalent in our sad and struggling species, and so hard to transcend.

I’ve noticed that the ideas of Eckhart Tolle and Adyashanti, whose writings and presentations in this area resonate most with me, have audiences that seem less female-dominated than those of most “spiritual teachers”. I’ve also noticed that I tend to have more difficulty explaining what I’m trying to ‘achieve’ with women than with men.

I wondered whether this was due to the ways in which men and women tend to perceive the world differently. Eckhart acknowledges that women tend to be more grounded than men, less caught up in their heads, and hence tend to find it easier to realize presence. My earlier 4-state model of ‘how presence looks’ described two kinds of presence, one intellectual (when you’re into a groove with a group of people and just “on”), and one sensual and intuitive (when you’re in a state of relaxed, spacious awareness). Eckhart’s writing has convinced me that the former ‘type’ of presence isn’t really intellectual at all — it’s just a more social form of the one presence, spacious awareness. When you’re “on” with a group of people, it’s because you are open and noticing and responding in the moment, not because you’re thinking. So I’ve re-cast my model, above, with only one form of presence (state #6 in this diagram).

I’ve also realized that with Jung’s four ways of knowing and being — intellectual, emotional, sensual and instinctual — there are actually 6 permutations or “states of being” when you look at which two ways are dominant in you at any point in time. So now my model, which I’d hoped to simplify, has 6 states of being rather than the 4 of the earlier model. Acknowledging the additional states produced two “ahas” for me:

So here is a brief walk-through of the 6 states in this revised model:

I have a growing appreciation of the possibility of achieving this state of awareness, but am still stuck variously in states #1-#3. I’m also not sure which of these states some human activities (e.g. collaborative play, learning new things) tend to get us to.

cartoon by Charles Barsotti from The New Yorker

So I continue to practice, to try different types of meditation, inquiry, and contemplation, to try to invoke a truly present state. It’s my obsession, I know, and possibly the realization I seek will never come. And yes I know I’m overthinking this, but every once in a while I need to sit for a while in state #3, in which this post was mostly written, not in the expectation that this is a path to awakening, but because this is my ‘idle’ state when I tire of practice.

7 Responses to Thoughts About Not Thinking