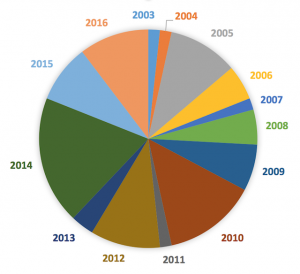 I‘ve spent the last few days re-reading about 300 of what must be at least 2500 posts on this blog. I started it in February 2003, churning out short articles an average of at least once a day until 2007, longer pieces once every second day in 2008-09, and mostly essay-length pieces once a week since my retirement in 2010.

What I re-read were the articles I rated as my best two years ago, plus a bunch that I’d omitted but more recently re-discovered and considered adding to the list, plus everything I’d written these last two years. As I did, I deleted 11 articles from the list, despite the fact some of them had garnered a lot of attention, most of it complimentary. After culling a short list of possible additions, I added 16 new articles, bringing the current total to 58. They’re listed in the right sidebar. I’ve kept the four categories, but within each, they’re now listed from most recent to earliest. The pie chart above shows the distribution of these 58 posts by year. I’m at a loss to explain the year-to-year variances, which don’t correlate at all to my busyness or health.

There is also little correlation between my assessment of the quality of the article and the number of comments it received (including more recently the number of Facebook/ Twitter comments and ‘shares’). I did however weigh the tenor of the comments in deciding which articles belonged in the list.

Some of the articles are a bit dated and reflect beliefs I no longer hold; I’ve decided not to tamper with them. I will update the ‘Save the World’ reading list again.

I’m toying with the idea of creating a PDF of all 58 articles, and perhaps a separate PDF of all the book reviews I’ve written here (few of which made the list-of-58) that serve as my auxiliary memory from time to time.

1 Response to My Best Stuff