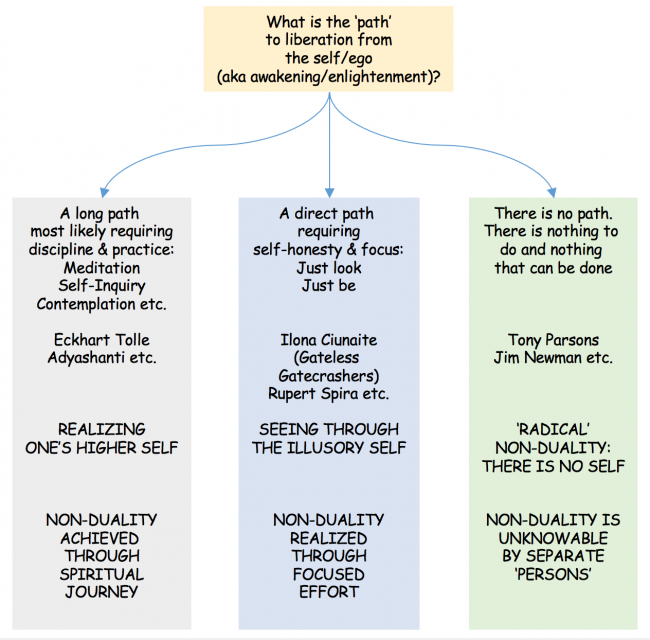 It’s now been 7 years since I began striving to become more “present” and 4 years since I gave up the struggle and accepted that there is no path to presence, liberation, awakening, enlightenment, or (fill in your favoured word here).

When I go back now and listen to podcasts of Eckhart Tolle, Adyashanti, Rupert Spira etc (like this one) I am amazed at how, despite the differences in wording and articulation, and the differences in “what to do” to realize the truth of non-duality, the messages are more or less identical: the separate self is not actually ‘real’; there is only a timeless, infinite, empty “fullness” or “oneness”.

As the graphic above illustrates, there seem to be three main lines of thought on the whole issue of how to “get there”, that depend on the speaker’s perception of what is “behind” the unreal self. The first, espoused by most of what I would call traditional non-dual speakers, holds that there is a “higher self” that is part of everything that is left when the egoic self is transcended, and that this is, for most, an arduous path requiring lengthy practices of one kind or another. In that respect it might be called the “spiritual journey” message, and it has much in common with some religions promising transcendence through effort.

The second line of thought, shown in blue, is espoused by so-called “direct path” speakers, who say that all that is required is a focused, skilled effort to “see through” the illusion of the self. With the right focus and discipline, they say, liberation can occur in a matter of seconds.

The third line of thought, the one I have come to embrace, shown in green, is what I have called “radical non-duality”, whose message is that there is no path to rid oneself of the self, because there is no self, and hence no ‘one’ with free will to do anything.

What all non-dualists seemingly have in common is their message about what it is like when the sense of separate self is gone: It is a loss, rather than a gain of something; it is not a “state”, particularly a “blissful” one; it is a “seeing” of what was always there, which, after the initial “wow” moments, then is seen as ordinary, obvious, and unquestionably real and true; and while it seems to change everything, nothing actually changes — there is only a loss of what wasn’t real in the first place.

Beyond that, there is little consensus, and I have heard articulate arguments for all three lines of thought (and advocates of each who are vociferously critical of the other two), as well as some beliefs and philosophies that seem to combine elements of more than one of these lines of thought. Though radical non-duality resonates much more with me, likely due to my particular biology, enculturation, philosophical and intellectual inclinations and encountered “glimpses“, I can appreciate that others may find it bizarre and unfathomable. And since this realization is unknowable by any ‘one’, there is no point trying to describe it or persuade anyone that any of these three apparently-conflicting messages about non-duality is true, or truer than the others. But they’re all, clearly, ultimately describing the same thing.

Hope this is useful for others exploring non-duality.

This entry was posted in Our Culture / Ourselves, Radical Non-Duality, _ Uncategorized. Bookmark the permalink.

1 Response to Non-Duality: Three Ways of Describing the Elephant