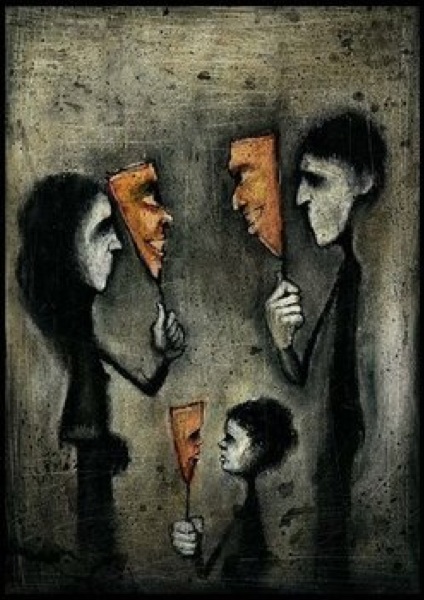 image from the collection of Nick Smith, “possibly by John Wareham”

The etymology of words that relate to personhood and identity is fascinating: Person, personality and persona, from the Latin meaning a mask; role, from the Old French meaning the roll of paper on which an actor’s lines are written; and, strangely, identity and character, both from the Latin, meaning, respectively, sameness and uniqueness.

The word self was originally not a noun, not a word that described anything substantial, but rather a reflexive modifier, se, a pointing back to the subject, used to ‘complete’ a description of an action that has no object; so in French elle se souvient = she (herself) remembers, which doesn’t refer at all to any such ‘thing’ as a ‘self’ but rather refers to who is doing the remembering.

I’m not suggesting that early Indo-European cultures had no sense of themselves. Rather, this absence of concrete terms that describe the self, the person, would, I think, most likely mean that the language of the time had no need for a term apart from the name or pronoun that describes a person. They were themselves, so why would they need a term for ‘themselves’, or for ‘persons’ or ‘identities’? It was only in play, in acting as someone other than themselves, that they would have to evolve a term for the role they were not playing, the mask beneath the mask they were wearing, for a while, separate from ‘themselves’.

We can of course not know whether prehistoric or preliterate cultures “played many parts”, and if so whether they were aware they were doing so. It’s likely they were as aware, and unaware, of the many roles they took on, their personas in different contexts of action and relationship, as we are today. Which is to say, only vaguely aware. We take on different personas, “play different parts”, in our roles as parents, lovers, workers, friends and colleagues, and we slide from one to another as automatically as a a voice-over actor playing multiple parts.

We “act (and think) differently” when we speak other languages, and when we’re intoxicated, not “ourselves”. In different relationships we may take on and take off whole sets of beliefs, worldviews, mindsets, and behaviours, based on completely different “stories of self”, in order to achieve comprehension, appreciation, and useful communication with others. And some of these different belief-laden personas can be completely incongruous with others, which can both alleviate and create enormous internal cognitive dissonance.

So for example, I had a long talk the other day (details to come soon) about collapse, and how we might best deal with it, based on my recent post Being Adaptable: A Reminder List. Just before the call, I had sent an email to someone else on the matter of free will, and I was aware that, to handle this new conversation competently, I had to “flick a switch” from the third to the second of three personas, each of which (these days) gets a regular turn at bat. I suppose I could label them as follows:

I think this second persona played its part relatively well today, with no inadvertent slips into switch positions 1 or 3, with all the confusion, annoyance and cognitive dissonance that could have produced.

What makes this subconscious role-playing even more complicated is that all three of these ‘voices of me’ have beliefs at the (mostly radical) end of different spectra: The compassionate humanist thinks anything short of direct action is a waste of time and energy, to the chagrin of many other humanists. I am at odds with many under the collapsnik umbrella, who I see as lacking a historically-based, nuanced and equanimous perspective about what collapse will bring and how we might approach it. And my radical non-dualist beliefs understandably infuriate those who have invested years on “spiritual paths”.

And at another level, these three personas are only a subset of the complex set of roles I play. They are, all three, amalgams of who I think other people want me to be (mainly, useful to them in some way — clarifying or creatively challenging or reassuring or attentive or appreciative), and who I imagine (or would like to imagine) myself to be (usually some combination of sensitive, sympathetic, and brilliantly and engagingly ahead of my time). And humble!

Each of these personas has its own ‘story of me’, a general script that smooths over the improvisational gaps between the lines that ‘I’ have been conditioned to deliver (or at least that’s how persona 3 sees it). Each defends a position, completely incompatible with the view of the other two personas, and each tries its best to help others with similar worldviews. None of the personas is interested, any more, in trying to change anyone’s mind.

Invite me to a meeting of young female entrepreneurs and persona 1 will show up, eager and supportive and full of experienced and heartfelt advice. On the way home I will text a fellow collapsnik about XR in persona 2, oblivious to the fact that what I told the young women is utterly incongruous with what I have just texted. And when I get home I will write a blog post in persona 3 about the illusion of separation, that belies what I just said at the meeting and what I just texted.

Perhaps my personas are a bit more schizophrenic than most people’s, but my sense is we all do this. In our zeal to assume each role, we ignore its cognitive dissonance with the last one we played, and in the process the alleged real ‘us’ gets more and more buried under the conditioned (and self-conditioned) gunk that we must, to be true to the role, hide behind.

Occasionally I think I see, underlying all of these personas, another ‘story of me’ that seems, somehow, more raw and honest (or maybe, to be ‘really’ honest, more self-indulgent, disingenuous and falsely self-deprecating) — the ‘me’ that is lost, scared and bewildered, and trying to figure out whether it’s alone in that, or if all the people it meets, who once seemed to it so certain and ‘together’ and competent and self-directed, are just lying to themselves, and the world. Just like ‘me’.

And then there’s this (hyper-)reactive ‘me’ who I’m quite ashamed of, who comes off quite badly in all three personas but still rears his angry, fearful, unhappy head way too often. And there’s the always-aching-to-fall-in-love ‘me’, who keeps forgetting both how wonderful that feels and how utterly self-invented and unsustainable that chemical state, and its absurd beliefs, are. But don’t remind me that when I’m in love, because that me won’t hear you.

None of these personas is real. They are all just parts, masks. In a world where there is [flicking the switch to position 3 again] nothing separate, no thing apart, we are all just acting a part — or perhaps it would be more accurate to say we are acting apart. Pretending. (Pretend and temporal are from the same root word, meaning — of course — something that doesn’t last. Only a lifetime! And oh! what might be beneath that mask, what is being ‘mask-ed’? no!…)

I remember as a child watching adults and asking myself if they were all just acting, and if so for whose benefit, because somehow I knew that everyone was just as lost, scared and bewildered as I was. But hear or see something (apparently) often enough, and you’ll come to believe it’s real. The war between your remembrance and intuitive ‘knowing’ of there being nothing separate, just perfectly everything, on one side, and your self and every other self working furiously to convince you otherwise, on the other, is an endless war of attrition. ‘You’ cannot win.