What’s Next For CoVid-19: Some Wild Guesses

Forecasts April 9th, 2020 (shortly after this article was first written): 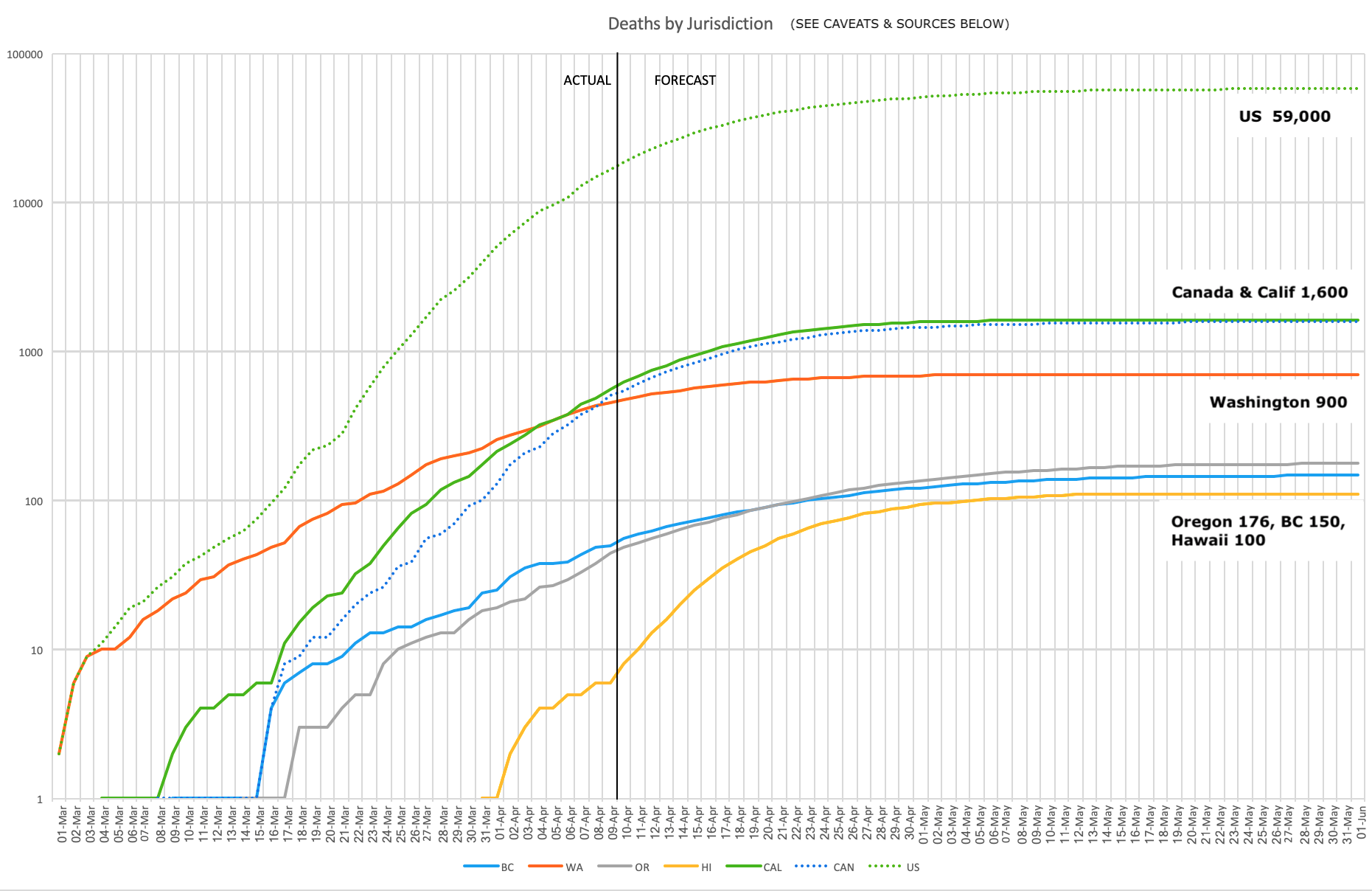 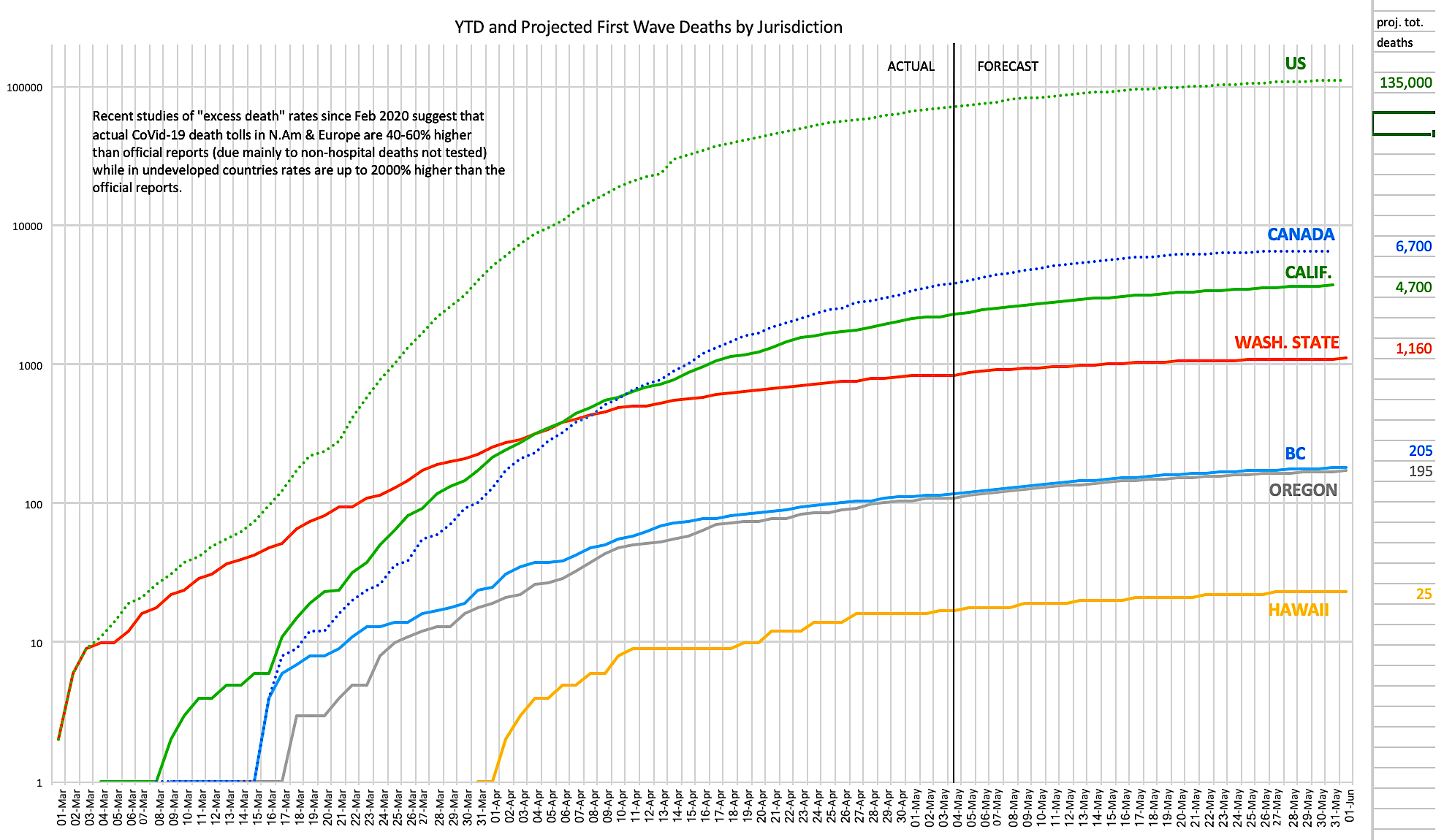 Current CoVid-19 deaths for North America West Coast jurisdictions to [EDITS: updated to April 9th & May 4th] per the nCoVid2019 Dashboard, and projected most likely (95% confidence intervals: +/- 50%) total deaths to the end of this wave of the pandemic for each jurisdiction per U of Washington IHME projections as at [EDITS updated to April 7th and May 1st]. Interpolations of this data for Canadian jurisdictions in the top chart are mine. Click on images for larger versions.  Download the latest version of this Excel chart and data. (I plan to keep it current until at least June 1.)

Caveat 1: I am not an expert in this subject, and these are only my wild informed guesses, subject to drastic future change and possibly great retroactive embarrassment. But I thought I’d try to summarize how it looks to me at this pivotal point, based on my experience and research.

Caveat 2: The above IHME April 7th projections are much more optimistic than just a week ago (1/3 fewer projected total deaths); [EDIT] the updated May 1st projections are nearly twice what was projected just a week earlier. These projections assume no further waves and no slackening of social distancing until either (1) resources exist to do exhaustive ongoing testing, or (2) an effective vaccine is fully implemented. The top chart early predictions have already been exceeded, and in my opinion death totals 40-60% higher than even the upward-revised (lower chart) projections are likely once unexplained excess deaths have been factored in.

The most important things to keep in mind right now IMO:

LEARNING FROM PAST PANDEMICS

When I worked 12 years ago with the Ministry of Health with a special group hired to learn the lessons of SARS so there would be no repetition of the mistakes made then, we studied the epidemiology not only of SARS (CoV-1) but of various bird flus (H5N1, H7N9), swine flus (H1N1), and the 1918 pandemic (“Spanish flu”, also an H1N1).

What was so remarkable about this work is that most of what we would ideally like to know/learn about these diseases we could not learn, for a number of reasons — mostly about how incredibly little we really understand viruses and how they proliferate, but also because the history is still unclear. You would think, for example, that by now we would know where the 1918 pandemic arose, but we remain utterly clueless, with at least 3 major theories, all of them somewhat suspect.

We also can’t yet agree on how many died from the 1918 virus, with estimates varying by more than an order of magnitude.

Nevertheless, there is much to learn from that pandemic, and I’d commend this New Yorker video to you — an interview with John Barry, a writer who’s spent much of his life studying it.

Some things that we did learn, that now seem to have become lost in the shuffle:

MODELS OF WHAT TO DO NEXT TIME

The economic impact of this virus, due to our unpreparedness for it, will be staggering. There is a significant risk of a long and deep economic depression (more on that in a future article). But this didn’t have to be.

Some jurisdictions have been largely spared both the health and economic costs of this virus, notably Taiwan. Lessons from their experience and preparedness:

PREVENTING PANDEMICS IN THE FIRST PLACE

While the above models can dramatically mitigate the impact of pandemics when they first occur, it would be even better if we were to prevent them happening in the first place. When Dr Michael Gregor was working in epidemiology a decade ago, he published his findings on the history of human pandemics and their causes. He revealed that virus transmission to humans only became possible with the domestication of animals 10,000 years ago, and all known human viral infections (poxes etc) have their origin in domesticated animals or the consumption of bushmeat — without it there is no way for viruses to move from their endemic animal hosts to humans who have no immunity to them (hence leading to pandemics).

Two centuries ago pandemics became more prevalent again, commensurate with the intensification of “industrial” agriculture. Then with the development of vaccines, infectious diseases were almost eradicated from the planet by the 1970s, causing some health leaders to predict that such diseases would never again cause pandemics.

But then suddenly there was a third huge upswing in novel infectious diseases, starting just 30 years ago.  This corresponded with the order-of-magnitude increase in CAFEs (factory farming) of both domesticated and “exotic” birds and mammals for human food. Pangolins may the source of SARS CoV-2 (the current coronavirus that is expressed as CoVid-19).

There is nervous laughter around the room when Michael says, at the end of the 2009 presentation linked above, that “we could well face a situation in the near future where every American might have to shelter in place for as much as three months to prevent spread of a global lethal pandemic”.

It is to be hoped that, along with all the other learnings from this current horrible outbreak, we take to heart that only by completely ending the three sources of the recent upsurge in pandemic risks — (1) disturbance of the last wild places on the planet that harbour viruses for which there is no natural human immunity, (2) the bushmeat trade including domestication of “exotic” species for food, and (3) factory farming — will there be any chance that situations like that we are currently facing will not become increasingly frequent and dangerous.

But I would be surprised if there’s even an acknowledgement of this cause, outside an increasingly censored and silenced scientific and medical community.

WHAT TO DO NOW

And for the vast majority of us, it is going to be OK.

Next articles here will be on the economic fallout, which is likely to be longer and deeper than the health impact, but was overdue to happen anyway, and on why this horrible event may be a useful wake-up call that might get us started addressing some of the more profound and permanent challenges ahead.

7 Responses to What’s Next For CoVid-19: Some Wild Guesses