Is Consciousness a Mental Illness?

Perhaps my most annoying exploration of radical non-duality yet. Thanks to Richard for the lovely graphic. 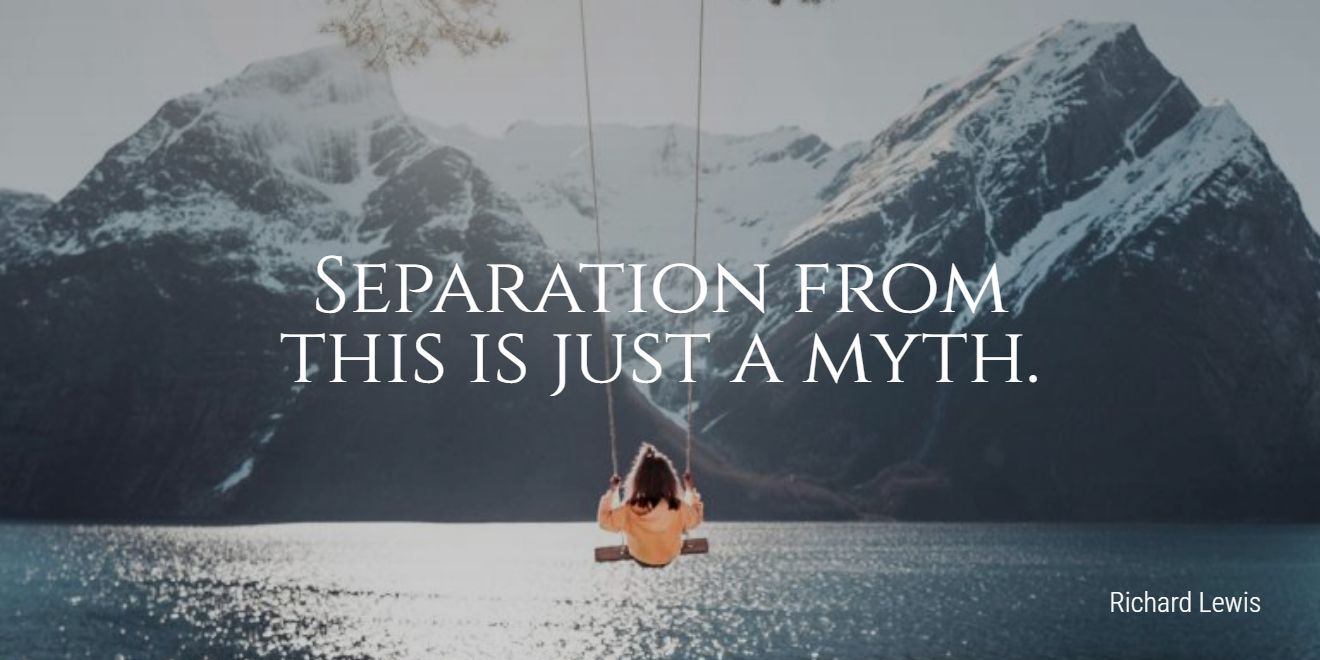 As I think more about the message of radical non-duality, I’ve started musing about the nature of consciousness.

We humans of course think of consciousness as a good thing, as an evolutionary advantage, and possibly something that separates our species, in degree if not in absolute terms, from all other species.

But radical non-duality would posit, I think, that it isn’t any of these things, and that consciousness might instead be a tragic form of mental illness that became possible when

(1) our brains got large and complex enough to be able to contemplate the idea of us being self-controlled individuals separate from everything else, and then

(2) that illusory sense of humans being ‘separate’ was reinforced, traumatically, through interactions with other afflicted humans (well-intentioned of course), until, over a lifetime, we came to see this disease as normal and necessary to our capacity to function.

Many religious and spiritual teachings suggest that we should actually aspire to a higher “level of consciousness”, as if more of this disease were a cure for its symptoms.

One of the hardest things for most people to accept is that we would be (and are) completely functional creatures without the need for consciousness. We are inclined to ascribe a rudimentary level of consciousness to all living creatures, even aphids and silverfish, because we cannot fathom that any creature would be able to survive without it.

But the laws of evolution do not require consciousness at all. Aphids and silverfish have survived because they were conditioned (genetically and experientially) to fight or flee or freeze in the presence of predators; insects that were poorly conditioned, over the hundreds of millions of years they have been evolving, dropped out of the gene pool, and those with successful conditioning survived. They do not need the capacity to conceive of themselves as separate and of having ‘selves’ to do so. They probably don’t have the brain capacity in any case, and if they did it would arguably slow down rather than improve their survival reflexes.

Why should our species be any different? We’re genetically indistinguishable from our closest animal relatives, and all species of life have been evolutionarily equipped with the tools needed to survive in their particular ecological niches as long as they fit in with and contribute to the ecological health of all life in those niches. We are as utterly conditioned by our genes and cultural experiences as aphids and silverfish. Any creature that doesn’t fit, in the evolutionary sense of fitting in with the rest of the ecosystem, goes extinct.

Except, that is, in the case of rogue species, like humans and cancers, that somehow lose their connectedness to all the rest of life in their ecosystems and pursue their ‘own’ survival at the cost of all others’, and wreak ecological havoc as a result. They of course die along with the hosts that enabled them to live — the body or planet which they have so unbalanced as to cause its life’s extinction.

Our study of cancers suggests they are ‘coding’ errors — random variations that evolution is continually experimenting with in search of even greater fitness and complexity of life. These variations usually amount to nothing and are evolutionary dead ends, but they occasionally lead to great improvements in adaptability, and they occasionally produce rogue species grotesquely unfit for their environments. That very unfitness ensures that their reckless tenure in their particular ecosystems is short-lived. Our species has been around an astonishingly short time in evolutionary terms, and our extinction or near-extinction within this century is already, according to a growing number of scientists, a virtual certainty. Our sense of consciousness hasn’t helped at all.

Or consider viruses: These days we’re understandably curious about what possible roles viruses might play in our planet’s evolution. Viruses are of course messengers, transmitting information between species. But significantly, they are also population regulators, especially of bacterial and insect populations. Without the critical role of viruses (of which an infinitesimally small number are human pathogens BTW), imbalances in bacterial and insect populations would disastrously alter our biosphere and atmosphere in a matter of days, dramatically changing (and radically simplifying) life on the planet.

Even if we were to argue that aphids and silverfish are slightly “conscious”, we could not make the same argument of viruses, which are arguably not even ‘alive’. The incredible evolutionary role of viruses, and their importance to the web of life, should suffice to convince us that “consciousness” is completely inessential to evolutionary success.

I’ve explained elsewhere how and why the sense of consciousness may have evolved, at least in our species, even though (perhaps like our appendix and our separate toes) it wasn’t and isn’t necessary to our ability to function and thrive perfectly well. Nature evolves things because it can, and because random evolutionary variations sometimes prove advantageous. But they don’t necessarily disappear even when they aren’t advantageous, unless some other need for the space or capacity crowds it out.

If consciousness is indeed a mental illness, a mistaking a mental model for reality, it could probably only have been sustained in the human species through the invention and use of abstract language. The concepts of a separate self, and of commensurate free will, responsibility, and ‘personal’ danger, would be unlikely, I’d guess, to take hold in a non-literate society. I would argue that our survival almost certainly does not require such a sense.

Abstract language might have emerged initially as a coping mechanism — as a means of sharing our grief over, and commiserating about, the terrible anxiety (and sense of something important missing) that arose when we became afflicted with this delusion of separateness. And abstract language has reinforced that delusion ever since.

So if consciousness, and all the guilt, shame, fear, anxiety, anger, grief and suffering that comes along with it, is a mental illness, might there be a way to ‘cure’ it? Or are our big, under-utilized brains just inevitably going to contract this illness because of their enormous capacity to imagine?

Michael Pollan and others have suggested that psilocybin and some other hallucinogenic substances might at least temporarily alleviate, and might permanently ‘cure’, the symptoms of this mental illness, by disrupting the neural pathways that correspond to ideas about the self, separation and (self-)consciousness. Successes are, however, anecdotal, and the cultural taboos against these substances are likely to impair any definitive answer as to their efficacy.

Those disseminating the radical non-duality message are a bit non-plussed when I suggest this theory to them. When there is no self, no sense of separation, and no sense that anything is or ever was ‘conscious’, the idea of being able to ‘cure’ something non-existent just doesn’t make sense.

After all, if there is no ‘you’, how can ‘you’ be afflicted by, or cured of, anything? If there is no life or death, no time or space, nothing ‘known’, nothing separate, how can there be any disease, any misunderstanding, or anything ‘conscious’ of anything ‘else’? The idea that the brain invented the idea of the separate self, and hence everything else apart from it, can only be a fiction, since there is no (real, separate) brain or body and no time or space in which anything can be invented.

What is left is a massive cognitive dissonance: On the one hand it is somehow reassuring, even exciting, that this staggeringly radical idea not only makes intuitive sense, it makes scientific sense, makes evolutionary sense. It is comforting, somehow, that there is a possible reason for all this senseless and completely invented suffering — that we can create a model that seems to explain the ghastly, frustrating loneliness, helplessness and unhappiness of being conscious.

But on the other hand, the lesson of radical non-duality is that there is no reason or purpose for anything, no evolution or time over which anything evolves, and no one and no thing to evolve. The science is just pattern-making, just a part of the fiction, just more make-believe. It’s a nice story, until we realize it’s just a story.

So the answer to the question: Is consciousness a mental illness that might be cured or at least treated, is, sadly, moot. There is no consciousness, no one conscious. One might be able to make a quite compelling scientific case for why that is so, and for why humans seem afflicted by a complete illusion that arose in our too-smart-for-our-own-good brains. But ultimately it will be an unsatisfactory one. It’s built on the same false premises that all of science is built on, and hence it’s just a tale “signifying nothing”, no more or less credible or relevant to anything than the QAnon stories of alien lizard people ruling the world.

There is, sadly, no cure for this unreal disease.

But my conditioning won’t allow me to cease making up stories, each hopefully slightly more credible than the last, that explain what cannot be explained or known, that make at least a bit of sense in a world that makes no sense, and has no need to. This is already everything, and its denial is already over. The news just hasn’t sunk in, and, since it’s veiled and unimaginable to us absurdly conscious humans, it never will sink in.

Outside of our seemingly dis-eased human minds and bodies, it’s always been obvious.

12 Responses to Is Consciousness a Mental Illness?