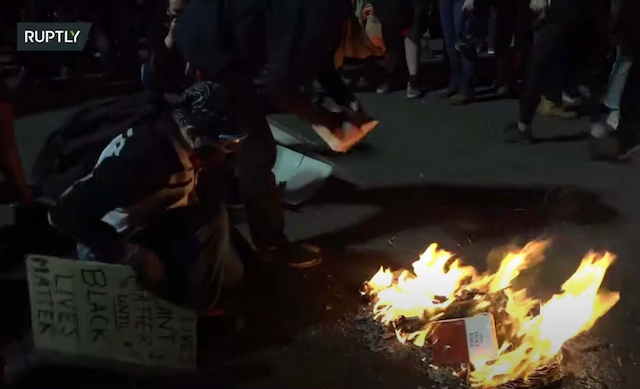 faked “bible burning by BLM protestors” video produced by RT, a Russian propaganda agency, rebroadcast by Trump Jr and others

I got holy children to show me the light, singing “hallelujah, brother how about you”?
Yeah, we got holy scriptures here that prove us to be right,
in believing out loud what we wish to be true.

I got stoned out neighbors to take me in tow, singing “close your eyes”, singing “open wide”.
Watch the world fall away below, let the winter wind blow,
and where will we hide when it comes from inside?

Much has been written about the role of craven, manipulative misinformation, disinformation, and fabricated conspiracy theories, in election results, and on a larger scale in the seizing, consolidation and protection of political and economic power.

Such deceptions have long been essential to the functioning of our societies. Advertising, marketing and PR are, in essence, the art of using misinformation and propaganda to persuade consumers that crap is better for us and worth far more money than is actually the case. That crap now includes political candidates, their parties, and their positions.

Without them, stocks and real estate would be worth a small fraction of what they are valued at now, and most “consumer product” companies and politicians would be out of business. Without them, many wars, including the Cold War, that cost millions of lives and trillions of dollars could never have been successfully launched or sustained. Having invited misinformation to the party more than a century ago, we cannot now say it has no place in a healthy society. Though it has no place in a healthy society.

In a recent article by Joshua Yaffa in the New Yorker, the Russian correspondent analyzes what effect Russian propaganda has had on US elections, and on Americans’ political beliefs in general. Basically he concludes:

There are no simple solutions to this very old problem. Misinformation in the form of advertising and doctored research is, after all, the cause of our ingesting the many toxic products of modern industrial agriculture, which directly cause the vast majority of deaths and chronic illnesses in this world. If we’re OK with propaganda that kills most of us and causes almost everyone horrific suffering, all 7.8 billion of us, why would we not be OK with a bit of nasty political obfuscation, especially if it helps us engineer more profitable wars and more ‘defence’ spending on which our economy now depends, or helps “our side” win an election we deserve to lose?

“The real solution lies in crafting a society and a politics that are more responsive, credible, and just”, Joshua writes. Yeah, and how’s that going? Who exactly has the power to “craft” a whole society and politics? Us, collectively? IMO that’s just as naive as a lot of the proffered “solutions” to climate collapse.

Joshua cites US Cold War architect George Kennan (who coined the term “political warfare” in the 1940s) as saying that the only defence against “foreign” propaganda is a “healthy and vigorous” domestic society. That may be correct, but it’s cold comfort.

What we can do, and probably the only thing we can realistically do now, is to work to undermine the advocates of personal violence, and the means to incite violence, where it is unproductive and detrimental to the health of the domestic society. Arresting the perpetrators of personal violence against their perceived “enemies” after the fact just makes them martyrs and gives their advocacy even more publicity.

What we can do is disarm them before they can inflict death and suffering — give up trying to change their minds and instead disrupt their armed confrontations and other acts of violence in the streets, ideally at the planning stages but if necessary by standing between opposing groups and disarming them of guns, knives and other weapons, and safely decommissioning bombs, poison letters, and other instruments of public violence. This is what “homeland security” is supposed to be about, and why they supposedly need so much intelligence and money. It’s time they did their job, instead of just serving as recruiting agencies for racists, white supremacists and other right-wing white male hate-mongers.

As for the rest of us, we can only hope that, over time, our societies will become more “healthy and vigorous” and more “responsive, credible and just”. Dramatically reducing inequality of wealth and power would help. The outlook for that happening is, I think most would agree, dim. But it has happened before, when things got bad enough that governments had no choice but to intervene to support the poor, powerless and oppressed. If history is correct, it’s at least as possible as descent into civil war and fascism. We are all doing our best, after all, and there are some good signs that we’ve had just about enough misinformation overload.