CoVid-19: Making Sense of the Numbers

This is the 12th in a series of articles on CoVid-19. I am not a medical expert, but have worked with epidemiologists and have some expertise in research, data analysis and statistics. I am producing these articles in the belief that reasonably researched writing on this topic can’t help but be an improvement over the firehose of misinformation that represents far too much of what is being presented on this topic in social (and some other) media. 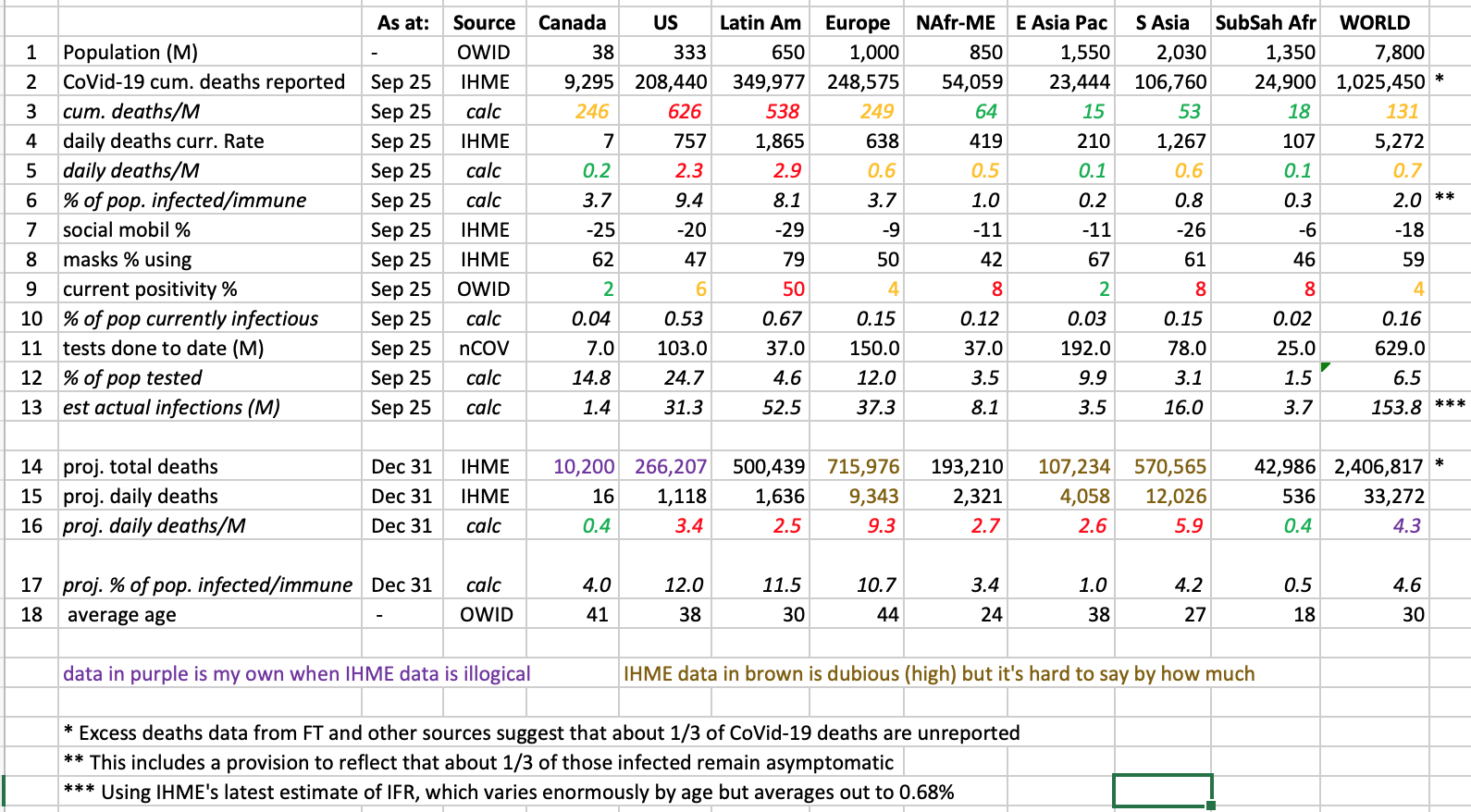 We’re about 7 months into this pandemic, and we’re still, despite what some politicians are saying, in wave one. There have been surges in various places but that’s because the disease has never really been under control. If there’s a wave two, it will be when it morphs into a new, mutated virus, that might be much more or much less lethal than the variants we have seen thus far, and might, like the 1918 wave two, affect a completely different demographic than the mainly-senior victims of wave one.

So taking the summary chart above, line by line, here’s where would seem to stand now: 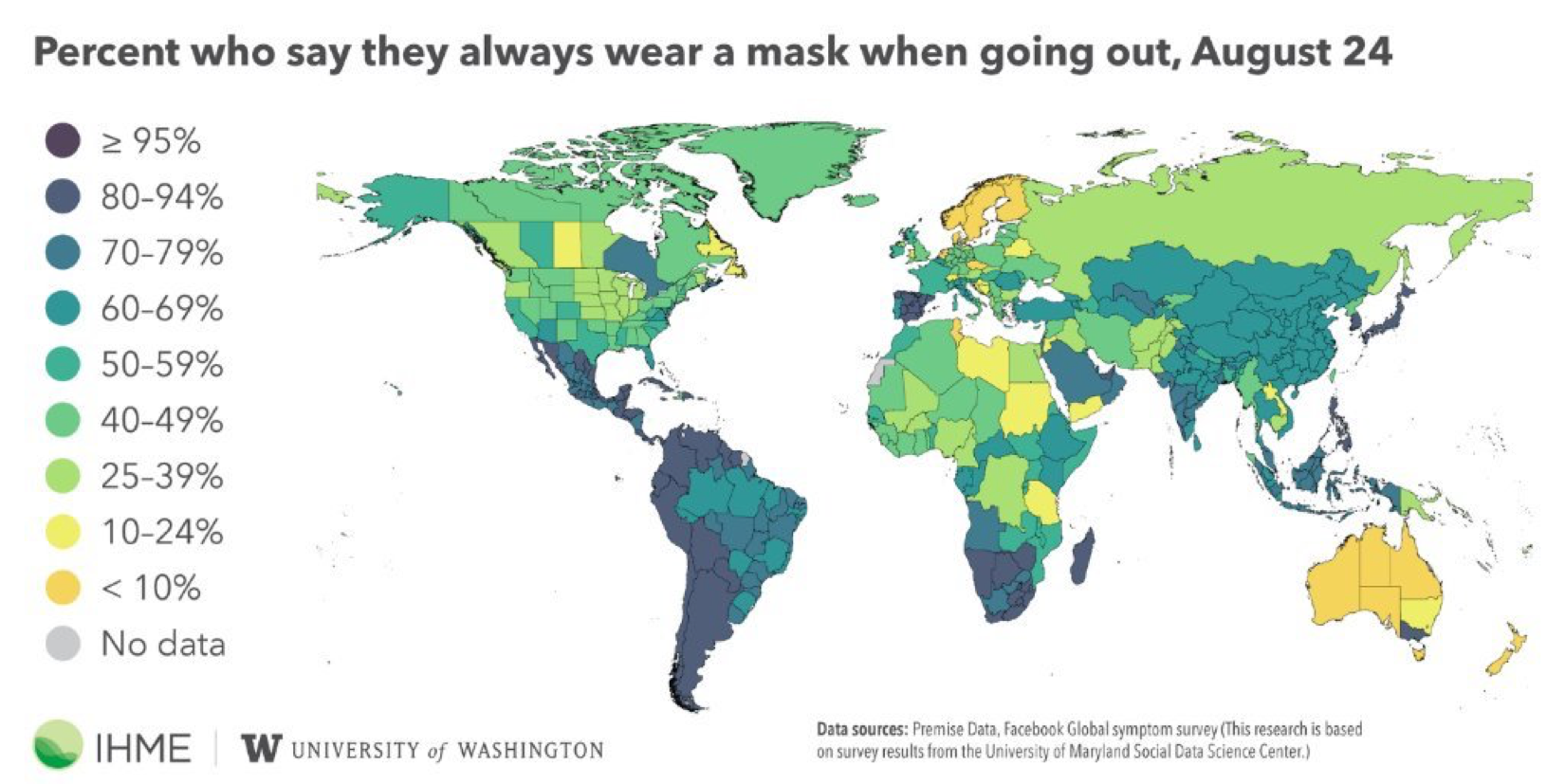 Only in the US is self-reported mask use, in some areas, declining. As cases spiked in Victoria state even Australians are starting to use them. In almost every area, increased mask use in an area follows a spike in cases and deaths in that area. But in most of the world, they’re keeping them on even as cases and deaths ease. 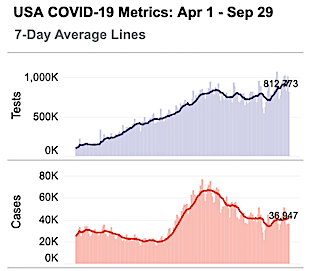 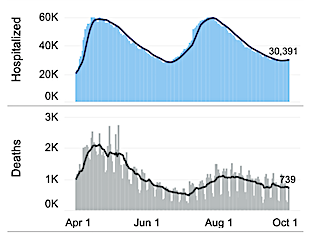 The above data, from the CoVid Tracking Project, shows what I think we’re likely to see in much of the world as the pandemic continues — a general flat-to-slowly-downward trend in actual cases (even as reported cases trend flat-to-upwards due to more testing), and in hospitalizations and deaths, but with recurring upswings in different areas due to a combination of complacency, relaxing standards prematurely, seasonal variations (as we move indoors for the winter and face regular influenza as well as CoVid-19), and just plain bad luck. There’s no reason to believe these trends won’t continue for at least another year or until an effective vaccine is available globally. Prepare for a long, thick, and irregularly shaped tail to this pandemic; it’s happened before. 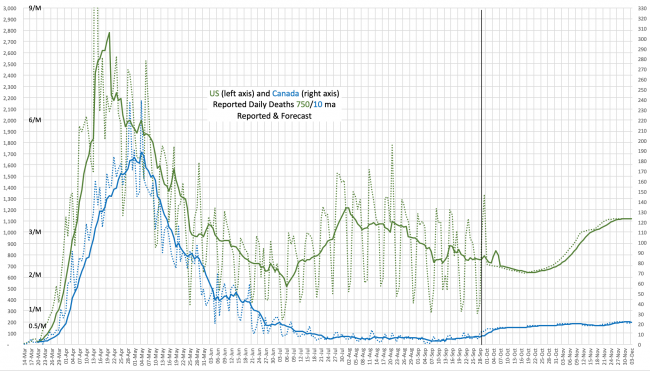 This chart shows the difference between a pandemic under control (Canada, blue) and a pandemic out of control (US, green). The difference is due to a combination of good luck and good management. Note that the Canadian data uses the right scale, which is 1/9 of the left scale, the same as the relative population proportions. Canada tried to flatten the curve, with more success than the US but not dramatically so. And then suddenly in June the curves diverged wildly to the point the daily deaths in Canada (under 10, ie 0.3/M/day) were as much as two orders of magnitude smaller than the US daily death rates (over 1,000, ie 3.0/M/day).

Because reported cases in the US are now flat at about 150/M/day, however, while reported cases in Canada have recently more than doubled from 13/M/day to 30/M/day, this enormous per-capita gap will likely narrow from 10:1 to closer to 3:1, with Canadian deaths doubling to 20/day (0.7/M/day) compared to a steady 750/day (2.3/M/day) in the US. The pandemic will remain out of control in the US, but may not stay in control in Canada. The IHME is forecasting a much worse situation by year-end, with US deaths quadrupling to 3,000/day (9/M/day) and Canadian deaths soaring by a factor of thirty to 300/day (8/M/day). I’d be very surprised if these alarmist predictions come to pass. 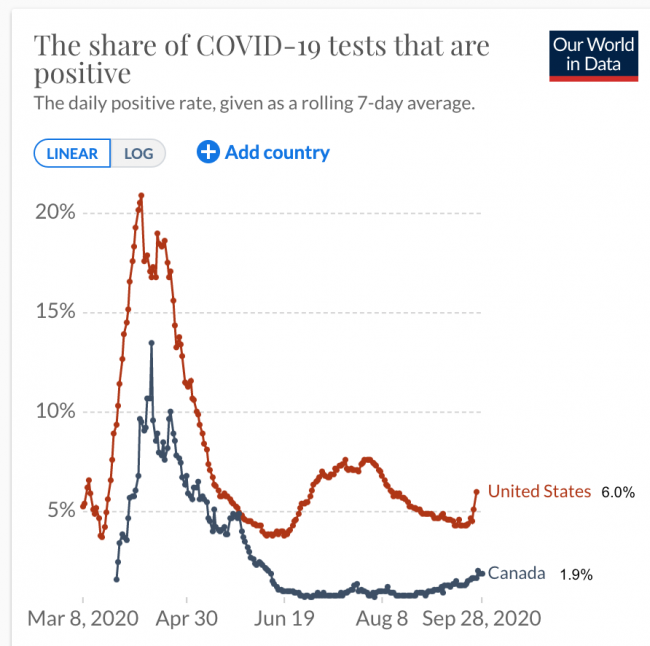 This chart, from Our World in Data, conveys a similar message — the per-capita death toll in the US, which has been 10x higher than Canada’s, is likely to move closer to 3:1 as the positivity rates converge. Still a large divergence, but worrisome for Canada’s situation, which is mirrored in several European countries where positivity rates have suddenly spiked above 5%. Testing and tracing just aren’t manageable when the positivity rate is more than about 3%, which translates into about 0.1% of the population being currently infectious, one out of every 1,000 people. Too many people to track. 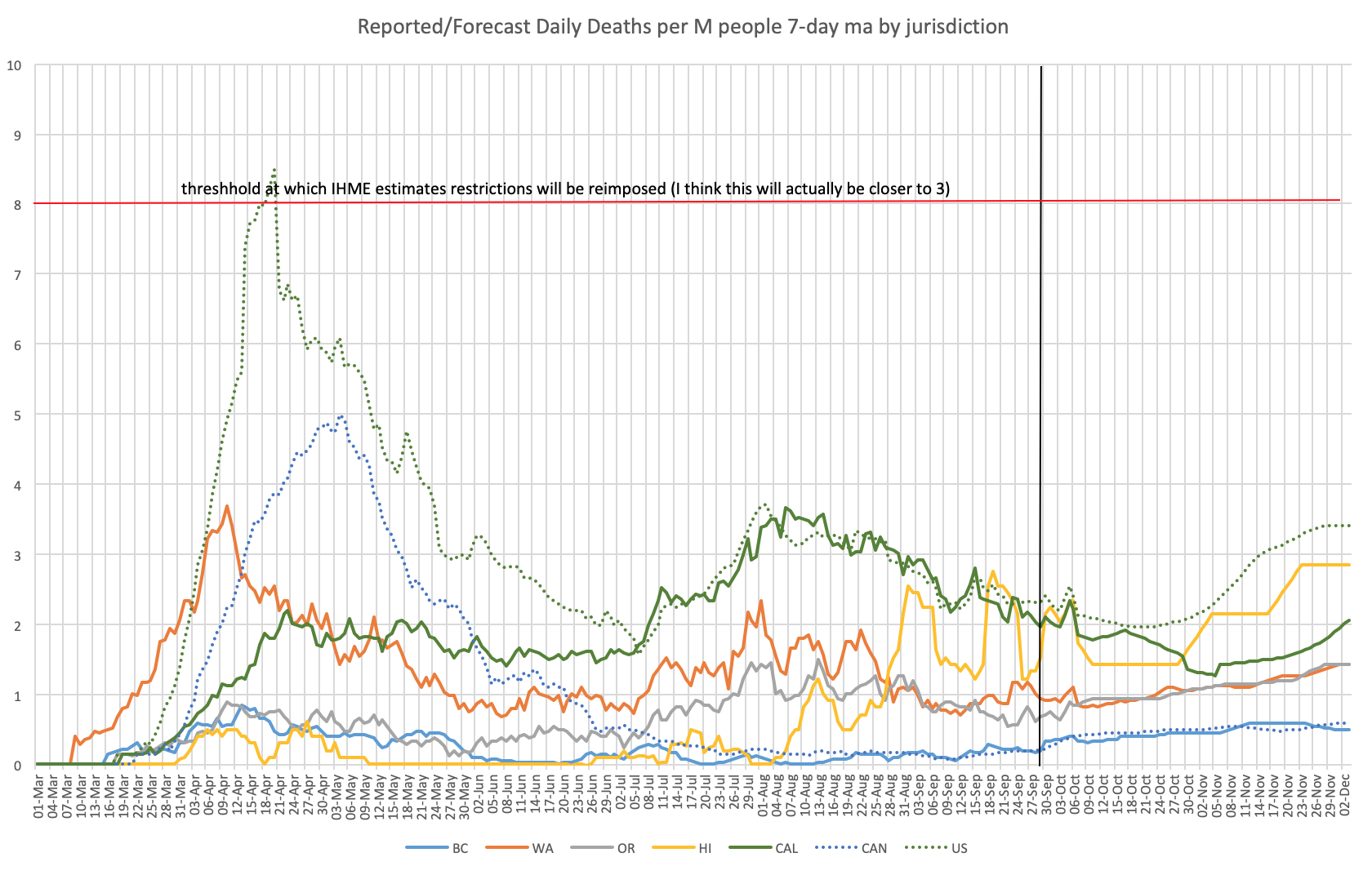 Here’s the first of three charts showing the situation on North America’s west coast. In each case these are reported deaths per million people per day. You can see when peak deaths hit each jurisdiction — Washington and BC first, then the east coast of the US, then Eastern Canada (the eastern states’/provinces’ infections came from Europe, and then worked their way west again), and much later California and Oregon, and just now Hawaii. The forecasts are mine, based on current reported case counts, adjusted IFRs, and behaviours after past case spikes. IHME is projecting these death counts to go off the chart in December (close to or over 10 deaths/M/day except in BC and Hawaii), with no action taken until rates cross the red line near the top of the chart. I don’t agree, but my track record to date hasn’t been any better than theirs. 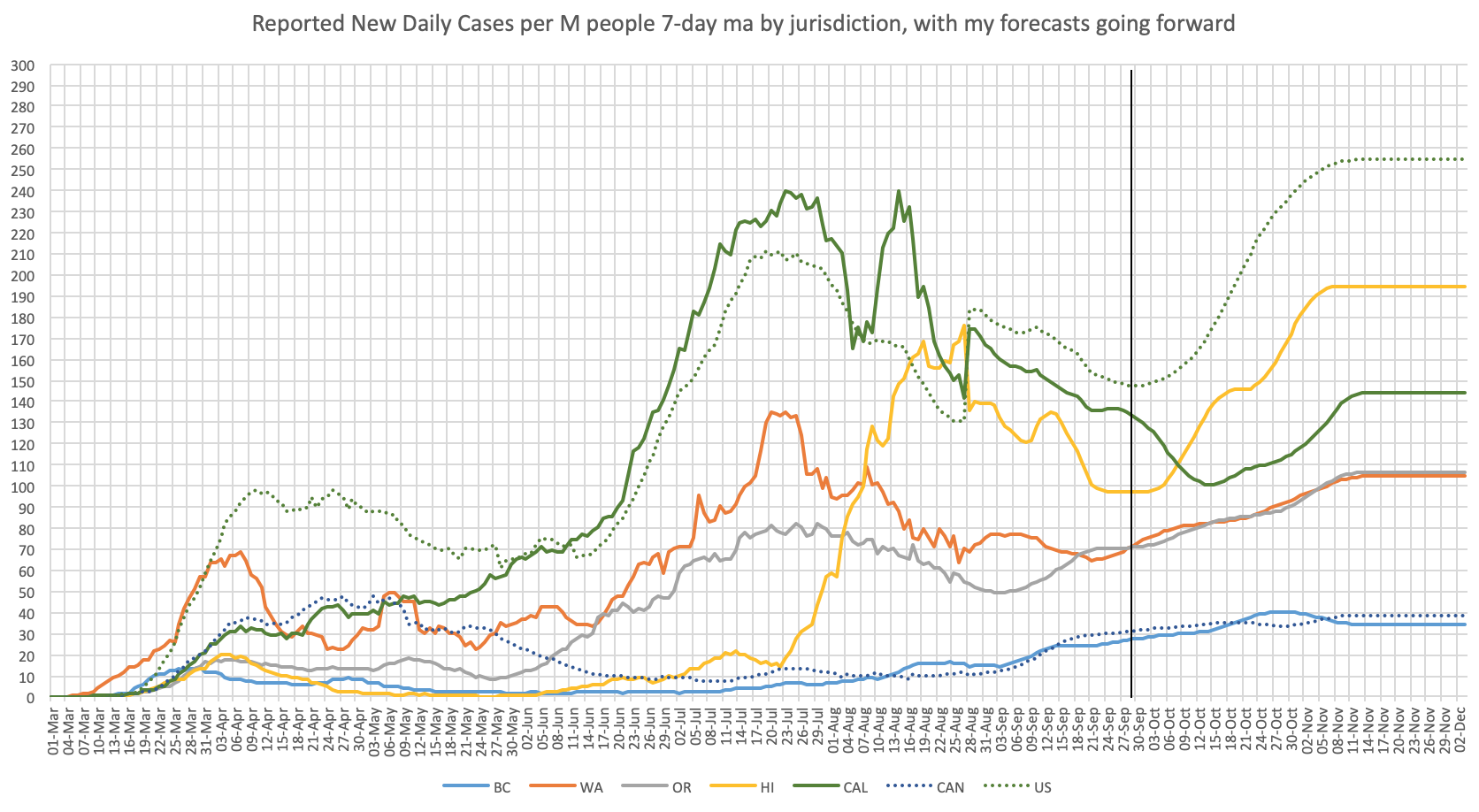 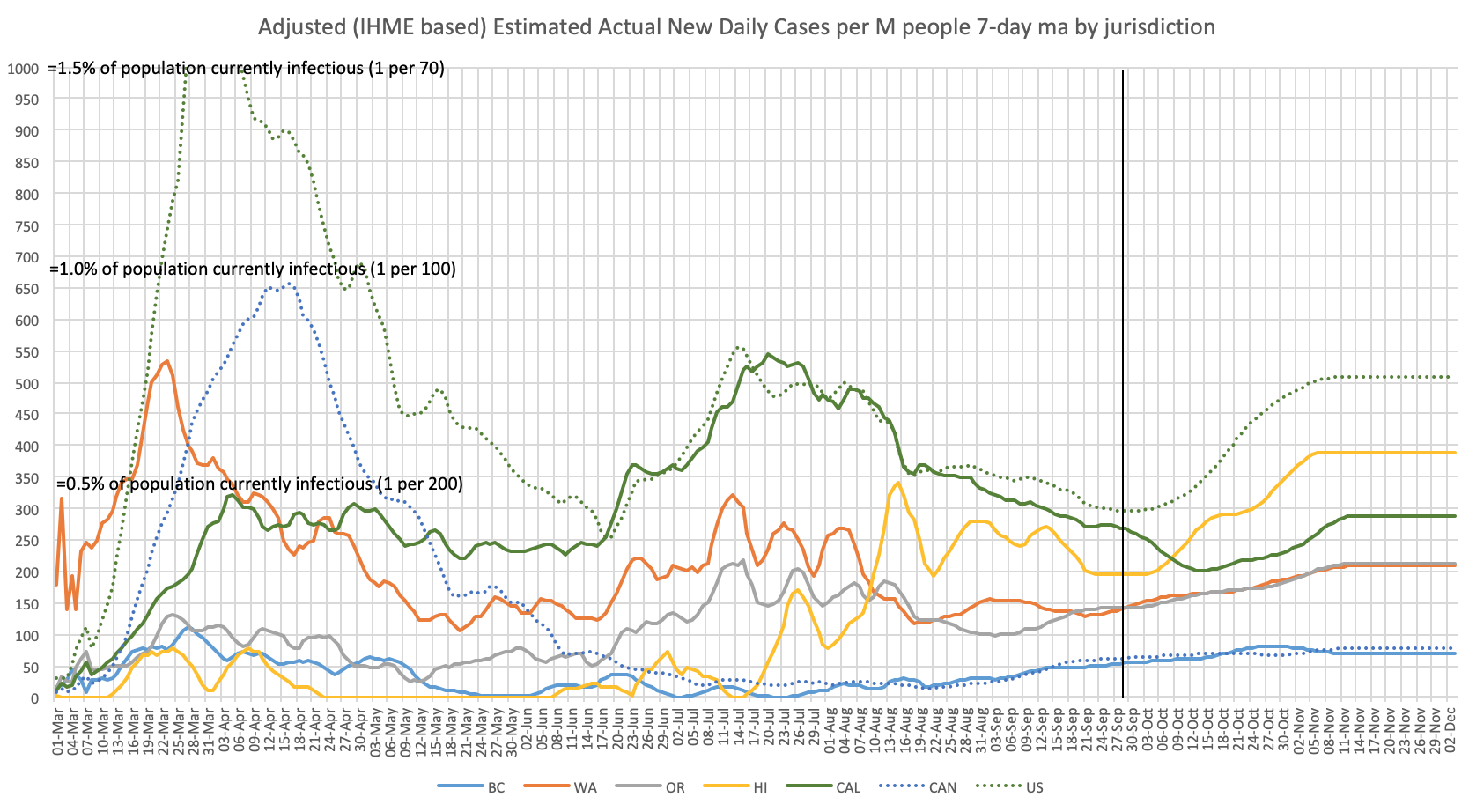 These two charts show, top, the reported cases per day per million people, and, below, IHMEs (with some minor adjustments by me) estimated actual cases per day per million people, based on “working backwards” from subsequently reported daily deaths. They tell very different stories. Peak reported cases in the US came in July, while in the Eastern US and in Washington state the actual case peak likely came back in March. Daily reported cases in all jurisdictions are now (end of September) at or near record highs, while in most jurisdictions estimated actual daily cases are nowhere near their earlier peaks.

Again, the projections are mine, as IHME’s much more pessimistic forecasts have estimated cases soaring off the top of the charts by the end of December.

Long bumpy ride ahead. But all pandemics end, and few of them last for years. Barring a second wave that kills the young and healthy like the second wave did in 1918, or unexpected problems with vaccines, I’m guessing a year from now we should be back doing most of the things we could do last year, though there will likely be some new, permanent or semi-permanent inconveniences.

But don’t get too comfortable. The chances of additional pandemics are high, and we’re not taking any of the steps needed to reduce their likelihood. And we still have basically no idea what the virus has done to our bodies that will affect our health long-term.

And if you think pandemics are a major inconvenience, just wait ’til you see what ecological and climate collapse will do to our unsustainable lifestyles in the years ahead.

2 Responses to CoVid-19: Making Sense of the Numbers