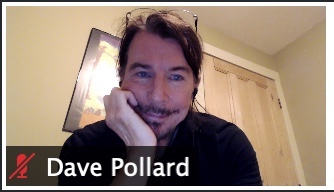 This is my anxious season. Normally at this time of year I get worried about ice and snow on my long steep driveway, and on the roads — fear of accidents and falls, and of being trapped inside the house (more psychological than physical). I get worried about mouse infestations, which were a huge challenge here a few years ago. I get worried about not being able to get to the store, the pharmacy, the doctor’s, the vet. About power failures, about my own incompetence at dealing with situations, about things being out of control, and about a million other small, foolish things.

These anxieties are totally out of proportion to any actual risk, but knowing that doesn’t make them go away.

Perhaps this is why I am so drawn to the message of radical non-duality. Although it argues that all these things I fear are not real, only appearances out of nothing, more fundamentally it argues that there is no ‘me’, no separate self to which anything (good or bad) actually happens.

It’s a difficult message to explain intellectually, despite its concordance with a lot of new discoveries in quantum science, astrophysics and cognitive science. I believe it because I want to believe it, and because it appeals to me intellectually as a sort of “grand theory of everything”, and because there have been glimpses where ‘I’ disappeared and it was absolutely and obviously ‘seen’ to be true.

Those whose ‘selves’ have somehow dropped away report what is seen ‘there’ to be always and unquestionably true. It is not a ‘state’ that can be achieved, or a theory of what is possible. This message of ‘all that is’ is simply obvious ‘there’. They’re just telling it like it is, as best as dualistic language can manage that, in the absence of a sense of self and separation.

If this happens after half a lifetime of believing your self to be real and separate, with free will and choice and responsibility, doing things in real space and time, then naturally there are residual effects in the body. There is a whole lore of beliefs, experiences and memories, all seen through the lens of the self, that are suddenly seen to have just been stories, explanations and theories and worldviews made up to try to make sense of a reality that is suddenly seen to be not real at all, just an invention.

Those who have ‘been through’ this ‘falling away of the self’ say that it was harrowing, like suddenly finding yourself in free fall with nothing to hold onto, and at the same time, a non-event, since the self that is seen not to exist is seen to have never existed. Instincts, preferences, and genetic and cultural conditioning remain, but the conditioning gradually loses its hold as it is seen to be based on completely false premises. The apparent ‘character’ that is ‘left behind’ continues to like chocolate and hate brussel sprouts, but will instinctively duck when someone throws something at it. Best to think of it this way: the characteristics of wild animals remain, and those seemingly unique to humans gradually melt away, when there is no longer anything to sustain them.

And the character, like everything else that seemingly happens, isn’t real either; it’s just an appearance. So nothing is taken ‘seriously’ anymore, and, with no self, nothing is taken ‘personally’. Since nothing is real or separate, it’s just a cosmic light-show — nothing really matters. There is no death or life, nothing at all to ‘worry’ about, since there is no one, nothing separate, to do the worrying. Just this whirlwind of energy of nothing appearing as everything, for no reason.

In the absence of a glimpse (or perhaps in the absence of a sense of desperation to bring one’s debilitating anxieties under control) this all has to seem preposterous, the ravings of a lunatic. Somehow, here, it resonates, unshakeably. There has always been a sense that this human life was far more complicated and difficult and unhappy than it needed to be, than it should be. A sense that receiving the gift of selfhood and separation in return for all that that entails, is a terrible, terrible bargain.

This perception/conception of reality is all made up in these brains and bodies, too smart for their own good, in an honest attempt to help us to do better what the complicity of our bodies’ cells and organs have (apparently) evolved to do as well as possible. That is their imperative, which becomes the manufactured, illusory ‘our’ imperative, but only through the ghastly veil of apart-hood, this invented, fraught, terrifying, false ‘reality’.

And so ‘we’ live in this dreamt reality, where our brains construct these models of what, according to the models, must really be, and the constructed me is then charged with the lifelong task of optimizing choices to keep the ‘me’ safe and healthy and productive, for the benefit of an imagined society of ‘me’s.

It’s as if we suddenly found ourselves playing a video game where it took all our energy and concentration to keep the car on the screen from crashing, a grotesque scenario displayed above the screen with a giant red X across it. And lo and behold we were actually really good at keeping our car on the road and navigating various obstacles. And so we just wanted to keep playing, as we were promoted to higher and more challenging levels.

And then suddenly a person came up to us and told us that the game we thought we were playing was actually in ‘demonstration’ mode, and sooner or later it would crash, no matter what we did, and all our fiddling with the dials and the buttons and the controllers was actually accomplishing nothing at all.

What a disappointment! What a relief!