Why Can’t We See? 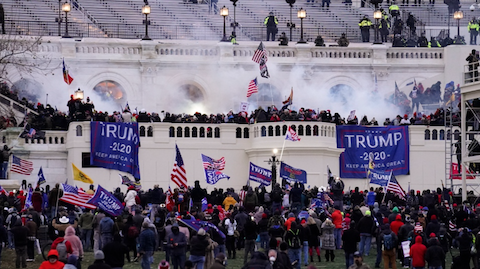 It’s been fascinating to see the response of what passes for “progressives” in western nations to what has unfolded in the US over the past few days. Suddenly they’ve gone all Law & Order, wanting police to clamp down hard on the antler-heads that briefly and easily occupied Congress, and on the narcissistic, psychopathic leader who goaded them to do it. You almost wonder if this was actually concocted by some mad right-winger who wanted to give everyone a taste of what “defunding and abolishing the police” might actually lead to.

First of all, this was not a coup, nor even a coup attempt. Despite the tragic deaths it was all theatre, right down to the antler-heads’ heavy make-up. Although some of them smashed their way in, many of them waltzed in through the front door, even taking selfies with some of the cops. That’s not to say it wasn’t serious. The behaviour of the invaders — not only mask-less but posing for photos and not concealing their identities in any way — wasn’t an act of bravado but one of nihilism. They felt they had nothing to lose.

Of course the police response was deplorable — had these been BIPOC protesters there would have been a bloody confrontation with dozens or hundreds killed and injured. And of course the invasion was predictable — authorities were too busy monitoring tweets and Facebook posts to take a gander at the explicit organizing instructions on the right-wing Parler, Dlive and other social media overtly encouraging and coordinating violent confrontation.

It has often been said, perhaps unfairly, that people get the governments they deserve. The choice in the US right now is between a party baldly willing to subvert democracy to keep a privileged white ultra-conservative caste in power indefinitely, and a party owned and run by a centre-right corporatist caste utterly beholden to the military-industrial-financial complex which is “democratic” in name only. The hold of the dominant castes on both parties has been growing stronger each decade. No party even vaguely represents either progressives or the working class. The citizens have been systematically and ruthlessly propagandized by lies, misinformation and fear to fiercely support either the Democrats or the Republicans, although neither cares a whit for their interests.

This is a system problem, one that is now beyond repair and will have to collapse, like all unsustainable, dysfunctional systems, and be replaced by a new system, which may well be just as unsustainable and dysfunctional, given the accelerating manifold crises that any new systems are now likely to emerge in. The American political system, like our global economic system and our global ecology, is in a well-advanced stage of collapse.

Giuliani and the rest of the whacked-out career criminals who pandered to Trump for money, power and pardons are all just cogs in the machine, now being replaced with a cadre of diverse-looking militaristic and economic hard-liners, whose only interest is to ensure the Republicans continue to look even worse to the majority of voters than the Democrats. Not a difficult task.

If you’ve read this blog before, you probably know I am not about to prescribe solutions for collapsing systems. There are none. But what I can do is to highlight a couple of the more insane ideas that are now being suggested to deal with the political crisis. Quite a few scientists, philosophers and other reasonably informed thinkers have pointed out the overwhelming evidence that we humans have no free will, and that as a result, negative reinforcement (incarceration and other punishment) simply never sustainably works.

Many progressives have long understood that the real point of abolishing police forces is to replace their presence and their budgets with resources for income and wealth equalization and the provision of social services that will prevent the desperate behaviours that underlie the “need” for police, lawyers and other anachronistic relics of our paternalistic, deeply prejudiced penal systems. While it is grating to acknowledge that the obnoxious antler-heads are only acting out their lifelong conditioning, and the only consequence of imprisoning them will be to harden them and make them even more dangerous, that’s probably the truth.

The result of our ‘civilized’ destruction of neighbourhoods and communities has been to alienate us all, to the point we can no longer see the vast and widespread state of shame, despair, desperation, rage and humiliation that underlies the kind of behaviour we saw in the streets of Washington DC this week, and the vote two months ago — and in the streets all over the world last summer, though they are not at all equivalent actions. We can no longer appreciate that it is our disconnection from each other that has polarized, alienated, ostracized and traumatized us to the point we consider half of our population “deplorables”. We don’t understand how they think and feel. We don’t want to. We are afraid to. We are so isolated in our insulated social bubbles that we have no contact with them.

A very conservative Manhattan-based co-worker of mine told me a number of years ago that he was finding it increasingly difficult to sympathize with “most” New Yorkers. He found them ignorant, uninformed, emotionally distant, tasteless, insufferably idealistic, and intolerant. A few hours later he described how he and his family lived: His kids were chauffeured to their private schools (public transit and public schools were “dangerous” and “useless” respectively). He took a limo to and from work, where he spent most of his waking hours. His (employer-subsidized) condo had an extensive security staff and systems that kept everyone out who didn’t have an invitation from an owner. His wife and his staff did all his shopping. He went only to private parties and exclusive restaurants. In short, he and his children had no contact at all with anyone outside the elite 1% of Manhattan’s most privileged. He had no friends outside that elite. How could he possibly know “most” New Yorkers well enough to judge them?

Joe Bageant likewise once told me that the main reason most Appalachians never vote for Democratic Party candidates is that they’ve never met one. In fact, they’ve never even met anyone who admitted to being a Democrat. How can anyone be expected to ever change their mind when they’re completely surrounded by one point of view?

And Canadians have no reason to be smug. The same polarization has been intensifying here over the past 40 years, and the proportion of right-wing extremists is growing rapidly. More than a few of the US “militia” leaders, including the Proud Boys founder, came from Canada. The current Canadian conservative party leader recently openly advocated that prisoners (a disproportionate number of whom are BIPOC) should be the very last Canadians to be offered the CoVid-19 vaccine. The government of Alberta includes a raft of known racists and hate-mongers. If you walk down the streets of Vancouver you’ll see a population that is more than 50% BIPOC, but walk into executive offices, banks, the million-dollar-and-up condos, the posh restaurants, boutiques and private clubs (if you are allowed past security) and you’ll see a very different crowd. Vancouverites walk right past each other every day, but they live in utterly different, disconnected worlds, and they simply don’t see each other. How can we possibly expect to understand how others think, and feel, with such isolation?

So. You want to hear my view of what we should do to deal with Trump, the antler-heads, the deplorables, the oblivious elite, the corrupt military, political and financial establishment, the small number of borderline fascists, the large number of unaware racists and caste-ists, and the even larger number of numb, angry, alienated, hopeless, desperate, struggling, defeated, exhausted “citizens” of our allegedly great “nations”?

It’s too late. You can try going out and meeting with them — get outside your neighbourhood and they’re likely to be at least half the people you see. But it won’t do any good now. They won’t trust you enough to talk with you, not the way you’re dressed, or the way you talk. They’re scared, backed into a corner. It takes an extreme state of anomie and outrage for 75 million people to drag themselves out to vote for a pathetic, illiterate, mentally ill, fear-driven, hate-filled, incompetent crotch-grabbing misogynist, the biggest business failure in the history of our planet — just to make a statement that anything’s better than what they believe (since no one has ever bothered to meet with them and calmly persuade them otherwise) is the current, deteriorating state of the country that the “other” party has caused.

If you do meet with them, you’re not going to change any minds. You might become less scared, less judgemental, less angry at “them”, and totally shocked at what has happened, and has been happening since the US (and Canada) were founded, that you never realized, never dreamed was going on.

Listen to them tell you that “most so-called” homeless people leave their cars in nearby alleyways and beg because “they’re too lazy to get a real job”. Listen to them tell you how they lost their jobs, their homes, their families, because “a bunch of goddamn greedy rich bastards” outsourced their livelihoods, foreclosed on their homes, blocked them from declaring bankruptcy because they maxed out their 28%/annum-interest credit cards to pay for surgery that failed, or for a university for their kids that turned out to be a fraud, just so the “bastards” could jack up their corporate profits to “earn” their million-dollar bonuses.

But talking with them won’t change anything. The system’s broken. Parts flying off in all directions now — watch out. When the Ponzi scheme markets collapse, it’s going to get nasty. When the people are told they can’t drive their cars or fly to visit their kids or parents because it’s killing the planet, that they can’t eat meat because it’s causing the obliteration of 90% of the world’s species, that it’s immoral to have children in a world suffocating with a grotesque overpopulation of humans, they’re going to do a lot more than dress up in paint and occupy some politician’s office.

The politicians know. The party’s over. There’s a reason all major parties in most western nations are obsessed with “national security”. They’re right to be. The planet’s been plundered to benefit the 1%, and now there’s only the dregs left, and the insane belief that somehow collapse can be averted. Just like the rats in the overcrowded chamber, we sense that something’s terribly wrong, that the hoarding has begun and that things will soon get a lot uglier. Just like the rats, we are starting to see the violence, the desperation, the fear and hiding and denial. And soon, the suicides, and the eating of the young.