We Are Our Story 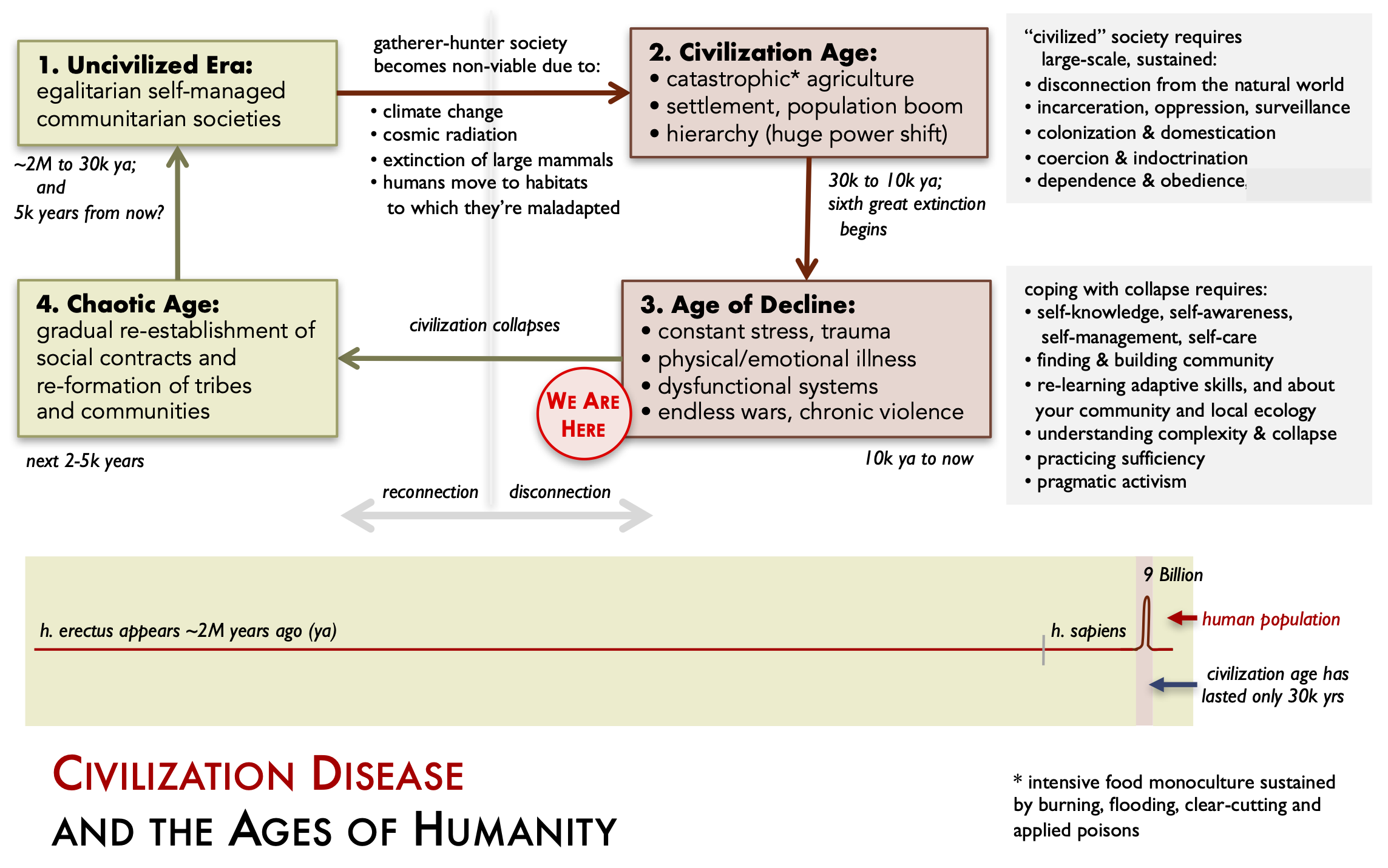 What I have called Civilization Disease is, I think, inextricably connected with humanity’s delusion of self and separation. Here’s what I think led to that:

Each morning when a modern human awakes, it has to recreate its story, built around its self, to make sense of how and why everything is as it is, how it “should be”, and what has happened in the past and might happen in the future. All of this is entirely made up, a fiction, reconstructed anew each day. Without this story the self cannot exist, and to some extent, the self is nothing more than this story.

How might this have come about? It’s conceivable, under the entanglement hypothesis, that humans are now born with the “necessary stuff” to concoct (imagine) a self, the representation of everyone and everything around it in time and space, and the story that is the self’s script, modus operandi, and reason for existence.

But it would seem that infants don’t have this sense of self or separation from everything ‘else’, or a ‘story of self’. The metaphor I have been using, for now (and it is a very imperfect metaphor) is that the makings of a self are like a piece of invisible VR headgear that we are (now) all born with, but which is initially turned off. At some point in very early childhood, our parents, anxious to give us a sense of self so we can function in the world, “switch on” the headgear, and suddenly we see this representation — of mother and father and “others”, of separate “things”, and then, astonishingly, of our “selves” as something apart from this seeming “everything else”.

It probably takes a bit of perseverance by the well-intentioned parents and others before the headgear is just left switched on all the time, and before the child learns to switch it on each time it wakes up, so that soon the child is no longer able to see anything outside the headgear, and ‘forgets’ there was ever another sense of what was real. The headgear was always invisible, always projecting only illusion, but now it is on, all day, every day, automatically, and it becomes the only reality.

As I say, it’s an imperfect metaphor, but it’s the best I’ve found.

It is, of course, excruciating that the self now begins to do things, to try to make decisions and control things, but what it sees happening through its invisible headgear just never matches up. It must furiously rationalize the reasons why this is so, why things are never perfectly the way they “should” be based on the model that instructs the headgear’s display. Why the controls of this game don’t seem to be working at all.

That means, for example, justifying war against those whose behaviour makes so little sense to the self that it must be labelled “wrong” or “evil”. Actions must be taken to make things “better”. And when things don’t go well, there is all the guilt and shame and hatred and blame and justification for why these selves, all of which are purportedly “in control” of “their” human bodies, are “misbehaving”. And, of course, there is fear and anxiety about all the terrible things that “might” happen, which our befuddled, integrated brains endlessly confuse with what is actually happening, making everything seem hopelessly, maddeningly out of control.

The people I know who are “no longer” afflicted by the illusion of self and separation remain perfectly functional, and seem to me more well-balanced than the rest of us. And I have no reason to believe that it isn’t possible for someone to grow up with the headgear of self never switched on, and no one would ever notice, least of all the unafflicted humans.

So back to the ‘story of self’. When I meet people who have suffered serious trauma, it appears to me that there is a ‘hole’ in their story. It’s as if the memories of what happened have been erased, or smudged. There is no peace in that, however — something in the traumatized self seems to be endlessly aware of this hole, and always trying to find some way to cover it up, to “make sense” of it, to make the whole story coherent.

And that’s what’s led me to believe that we (ie our “selves”) are our stories, and that is why people are always so desperate to have their stories make sense, and become dysfunctional when they do not.

I think, to be bearable, our “stories of me” have to meet two criteria:

When I talk with people who have suffered trauma, I notice again and again the enormous sense of shame I hear in the incoherence, discontinuity, directionlessness, hopeless incompleteness, and personal, often unspoken ‘failure’ in their stories. There’s a desperation to fill in the holes in their stories, that seems as great as the unbearable trauma that must have caused the holes in the first place, and an equal desperation to evoke reassurance from others, and in their own minds, that their story is, at least, understandable, headed in the right direction, and redeemable.

There have been a number of analyses, recently, of our civilization’s psychological malaise as being a reflection of the sense of our collective failure to produce a coherent, positive story about ourselves as a society. The tagline for a recent documentary is “We have given up on the future”, suggesting that we no longer hope for a story with either progress or redemption. Our story is broken, and if we are our personal stories, our culture is our collective story, and it must meet the same desperate, demanding criteria.

“We need to create and tell a new story”, we are told. Why? Because without a compelling (in both senses of the word) story we are nothing. We are worthless, meaningless, purposeless. “We are seeing the rise of a world without meaning, a society without narrative coherence”, another essayist writes.

The invisible headgear, the story, the storyteller, the self, the experiencer and the experience are all one and the same thing. And they are a fiction; they are just the invention of a frenzied, deranged brain, trying futilely to make sense of everything.

At various points during my life I have tried to summarize “the story of me”. My lifelong, hackneyed, self-aggrandizing bios have recently yielded to an anti-story, one that is completely lacking in narrative and flow. As I described it last year, it is this, a story about ‘my’ relationship with this apparent human ‘Dave’ creature ‘I’ arrogantly presume to inhabit:

I remain forever tethered to pursuit of the impossible truth that will finally make sense of everything, finally bring an end to the exhausting seeking. I am in a corner, now; I’ve painted myself in after a lifetime of striving to complete the picture, the picture that my latest belief denies the very existence of.

So I sit here with my box of colours, brow furrowed, wondering what this perfectly, tragically conditioned (and only apparent) creature will do next; I have no remaining illusion that ‘I’ have any agency over it (though that may be just what ‘I’ want to believe).

What happens when we can no longer believe what we want to believe, when we doubt that what we believe is actually true? Perhaps we just keep painting, even knowing the picture cannot be completed, that the canvas is just a dream. Like the carpenter with only a hammer, perhaps we keep hammering even when there are no more nails, when we discover, in the endless buzz of cognitive dissonance, that there may never have been any nails. Keep hammering, what we were made to do, and taught to do, and told to do. The only thing we can do.

It’s a really horrible story. Even Beckett would find it unacceptable. But I refuse to write a better one, a more accommodating, accessible one, with a good plot and tension and conflict and learning and redemption. I sit here, furiously shaking my invisible headgear and shouting “Fraud!” No more stories, please. They are worse than just self-glorifying fictions. They are lies, straitjackets, shackles, and the immiserators and scapegoats of our whole pathetic, ruinous civilization.

They are nature’s, and evolution’s, greatest blunder. They are the cause of our disease.

3 Responses to We Are Our Story