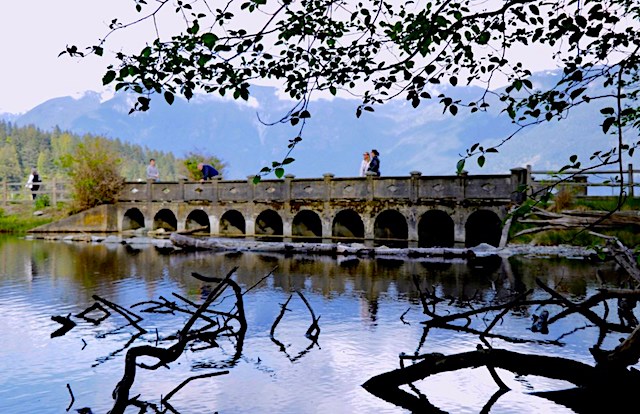 Monday has become my day for what I am calling “mindless wandering”. The term is a bit of a spoof on the absurdity of “mindfulness”. My objective is rather the opposite: To stop thinking and just pay attention. To open all my senses and take everything in, without labelling, judging, or expectation. The human self can of course never accept anything just as it is; we have to make sense of it, conceptually. My goal in mindless wandering is to try, instead, to just sense it perceptually, to notice the colours and shades, and tones of light and scent and sound and touch.

Perhaps one day I will graduate to coddiwompling.

Quite often I wander by the Bowen Island causeway, a heritage structure that crosses the divide between the freshwater creek and the saltwater ocean, while allowing lots of space beneath for the creatures that migrate between them. It is frequently full of birds, both seabirds and inland birds. Following are three short anecdotes about what I’ve noticed there lately.

There is a flock of perhaps 50 seagulls, that fly almost as one, back and forth between the two sides of the causeway. As they alight on the freshwater side, one of them ducks underwater, seemingly grasping for a fish or other underwater delicacy. The action goes unnoticed or unremarked. Then the gull does it again, and there is a pause, and then a second mimics the behaviour, and immediately thereafter the whole pack starts diving underwater.

And then there is calm for a few moments. And then one of the gulls takes wing and flies over the causeway. A moment later it returns, landing in a different part of the flotilla of birds. And then a minute later a different gull flies up, passes over the causeway, and as it does a second gull flies up and follows it. And immediately the fifty birds take off in a flurry, landing well out to sea on the other side.

This behaviour has been described in humans, and it is called the first follower pattern.

Ornithologists have also studied bird movements to ascertain how high up you need to be in the flock’s apparent hierarchy to get the rest of the flock to follow you. Their astonishing, painstaking discovery is that the process is entirely democratic. Anyone can make the first, or, apparently, the second, move, and it’s treated with the same gravity, or lack thereof.

II. Our kind don’t do that

There are three ducks on the edge of the lagoon, on the freshwater side, preening in the sun. Two crows sit nearby, perched on a branch lodged under a rock above the causeway, watching. Suddenly one of the ducks begins splashing noisily in the water, flapping its wings furiously and ducking its head underwater. In short order the others do the same.

And then one of the crows dives into the shallow water and mimics the behaviour. It is incredibly clumsy, falling over and upside down, and splashing, alternatively, ineffectively, and then too much, flipping again and falling underwater.

The second crow calls out to it, wildly, loudly, bobbing its head furiously. The first crow again watches the ducks, and again tries to mimic the behaviour, with the same hilarious result. The second crow again calls out noisily, staying above the splashing.

And then, baths seemingly over, the ducks settle in, two of them curving their heads around to sleeping position, while the third swims around near them, vigilantly.

I follow its gaze as it notices the first crow flit quietly along the edge of the causeway. And then the first crow, now unobserved by its murdermate, again practices the splashing motions, quietly, carefully, over and over.

III. No means no

There are three mallards in a row on a gravel patch just above the causeway, a female in between two males. One of the males is sleeping, smartly poised on one thin leg. The female is preening, and the second male starts doing the same. Then the second male sidles over, a few inches at a time, towards the female. And the female turns to him with a loud squawk and snaps at him until he returns to his previous place.

This drama is repeated three times, with the sleeping male seemingly unperturbed.

And then as the second male again starts to sidle over, the female launches herself towards him full bore, squawking and snapping. The admonished male takes to the sky in flight, but the female follows, repeating her annoyed cries, until the fleeing male is out of sight. As she flies back, she continues squawking, more quietly, perhaps to herself, or anyone who might be watching or listening.

This entry was posted in Creative Works, How the World Really Works. Bookmark the permalink.