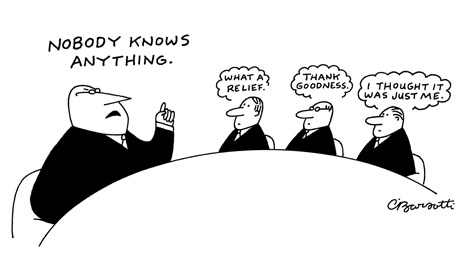 One of the most interesting insights that arises from studying radical non-duality and our lack of free will, is that all of our attempts to make sense of things, to know things, so that we can presumably make better decisions, actually have no effect. The character we presume to inhabit will do what it was inevitably going to do anyway. At best, what we believe we know can only help us better rationalize and feel better about what that character does, and perhaps feel (unjustifiably) more in control and safer than if we didn’t know.

What ‘we’ believe we know is just what, in accordance with Pollard’s Third Law, we want to believe is true. This knowledge is just beliefs based on patterns we think we (or others we trust) have identified. They are the best way we have found to make sense of this unknowable, bewildering world that actually makes no sense, and doesn’t need to make sense.

We do of course get some comfort from apparently knowing, from the reassurance and sense of control and safety that arises when a pattern that we previously identified seems to be still holding up. “At least we know”, we tell ourselves. “It’s better to know.”

So I can wax philosophical about how our beliefs and behaviours are just and wholly the result of our characters’ genetic and cultural conditioning. I believe I know that. But it is simply what I want to believe, because it helps me makes sense of what is going on in a way no other knowledge or belief seems to do. A decade ago I believed the opposite. In fact, over the past decade I have come to disbelieve many things I once believed, and thought were true. What once gave me comfort no longer does, but my new beliefs are just as flimsy as the old ones.

But my thirst to know remains as fierce as ever, and it is perpetually unquenched. Being curious by nature only makes that thirst worse.

In recent weeks I’ve received several doses of bad, surprising news. In each case, my first instinct when hearing it was to get to know everything I could about it, as if just knowing would make the situation better, more able to be coped with and acted upon. I was offended when I was unable to get information. I needed to know. I wanted my need to know acknowledged and addressed.

And at the same time I was annoyed at myself for being offended, since when I think about it, it’s obvious that I don’t have to know anything. Everything is just playing out the only way it could. And nothing I could know or do could change that. My character was compelled by its conditioning and the circumstances of the moment to do, and to believe, the only thing it could have. If my character were to come into possession of some information that changed its perception of the circumstances of the moment, and hence what it was compelled to do, well, then, that’s what was inevitably going to happen anyway. My struggle to know, changed, and changes, nothing.

And that brings me back to the realization that “nobody knows anything”, that knowledge is just a belief dressed up in a nice suit with a well-rehearsed set of talking points. That’s not how Charles Barsotti meant it in the above cartoon, but it is equally true.

What got me thinking about this was the realization that many people, due to their cultural conditioning and life circumstances less suited to critical thinking and research than I have been blessed with, believe they know lots of things that, at least here, seem patently absurd, such as:

I am sure there are hundreds more, that reflect brainwashing, logical fallacies, mis- and dis-information, groupthink, denial, and all the ways that our damaged selves try to shield themselves from, or inure themselves to, harm and suffering.

We are not well. We are doing our best to cope with what we believe is real. As a species, we pretty much suck at it. But no one is to blame.

At least, that’s what I’d like to believe. Of course, it won’t stop me from desperately wanting to know — more, faster, everything that can be known. Besides serving as my auxiliary memory device, that’s what this 8,000-page-long blog is all about. We feel we need to know, but we don’t, we can’t, and we don’t need to. Cognitive dissonance, anyone? Lots on offer here.

Thanks to Ben Tannahill for our discussion today, exploring some of these ideas.

6 Responses to Need to Know