If We Had Honest Headlines: The Global Decline of Real Journalism 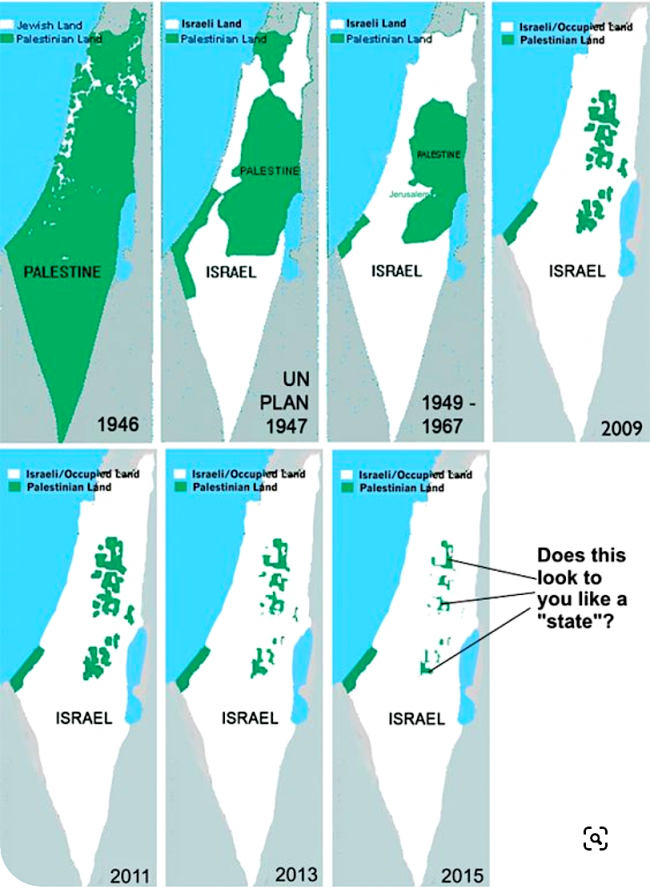 Palestine’s shrinking borders due to Israeli occupation. You won’t see this map on mainstream sites. The 2011 unoccupied areas match those of the Wikipedia map dated that year.

The mainstream media, which have long been used as house organs for spouting the talking points of the rich and powerful, are in free fall. Even the NYT has started publishing fact-free opinion pieces as “news”, no longer restricting them to the editorial pages, and no longer labeling them as editorials. Welcome to Faux Times.

What would it be like if the headlines actually told the truth? Of course, this would first require that the publishers make a serious effort to ascertain the truth, no matter how unpalatable, and dispense with reducing everything to simplistic binaries. And stop their nonsense “both-sidesing” news “reporting”. Giving column space to inflammatory racist and denialist arguments of execrable shills like Bret Stephens has nothing to do with “balanced” reporting.

After Reagan and Bush introduced Orwellian names for their ecologically ruinous deregulation laws (“The Clean Skies Act”), it’s almost as if newspaper publishers wanted to get in on the game. They write about “economic growth” as if it were a good thing that benefits everyone, rather than a scourge that is making our planet unliveable and benefitting only the richest one percent of the population.

If I were writing the headlines (admittedly with the benefit of some hindsight and the time and capacity to do my own research and to think critically about the issues), here is what some of them might look like:

Why do we, instead of truths like this, get false headlines, fed by intelligence spooks, PR wonks and corporatist “think tanks”, dutifully transcribed to the front page, when these media companies have supposedly taken a vow that “the truth dies in darkness” (actually, it just disappears behind a paywall)? Why are some of the worst atrocities in the world knowingly and systematically unreported?

I think there are three reasons:

I made a presentation two decades ago to a national press organization, and I told them at the time that unless they found a way to add real value to the information funnelling through them, that they would soon be disintermediated out of business. That’s now happening. They’ve obviously tried. But they’ve proven to be completely incompetent at fact-checking. They no longer do detailed analyses, since they’re too expensive and most of their audience is too busy, distracted, and dumbed down to read them anyway. They no longer do investigative reporting, since that’s also expensive and would require them, too often, to bite the political/corporatist hand that feeds them.

And paradoxically the effect of their increasingly severe paywalls and pan-handling “subscriptions” has been to turn customers away in frustration, to “free” sources of information, which are of course not really free, and are polluted with mis- and dis-information from nut groups and those with vested financial and political interests in concealing and obscuring the truth. I get no pleasure from having told them that would happen 20 years ago.

We are living in an era where our political and economic systems have become so dysfunctional that they are collapsing. Politicians no longer even pretend to play by the rules or to represent their constituents. Laws are written by and for the benefit of corporatist lobbyists and pressure groups, and mindlessly promulgated by politicians in return for campaign kickbacks. DeregulationO ensures an ever-increasing flow of wealth from the poor to the rich. But the media, who only look as far ahead and behind as tomorrow’s headlines necessitate, are oblivious to, and overwhelmed by, this collapse and its implications. It’s too complex to capture in bite-size, two-minute stories. It’s too complex to investigate or unravel all the chicanery and unexpected and indirect consequences of what’s happening, and those like Edward Snowden who try to point them towards it are turned upon like embarrassing upstart competitors.

In the anti-intellectual fervour of the 21st century, the mainstream media are fish out of water, and I predict that in a decade they will be gone, indistinguishable from the content-and-opinion providers of Substack, Medium, and the rest. There is no money to be made in providing information, except perhaps to intelligenceO agencies. There is even less money to be made in providing nuanced, complex, in-depth, critically-considered, truthful information. The money is in entertainment, distraction, propaganda, and attention-grabbing, outraging disinformation. The mindless pap of Facebook and Twitter.

As I’ve said before, I am addicted to wanting to know what’s really going on. That’s getting more and more difficult, even discounting the decline of information media. As we slide from a complex world into the chaotic one of full-on collapse, knowing the truth becomes less and less useful. I’ve been trying to be a “chronicler” of civilization’s collapse. I may have to find another retirement career. Maybe chronicling what’s happening at a hyper-local level, where it’s still possible to make some sense of things. Maybe fiction and poetry, where I can explore some larger truths. We’ll see.

2 Responses to If We Had Honest Headlines: The Global Decline of Real Journalism