CoVid-19: What Do We Owe the Unvaccinated? 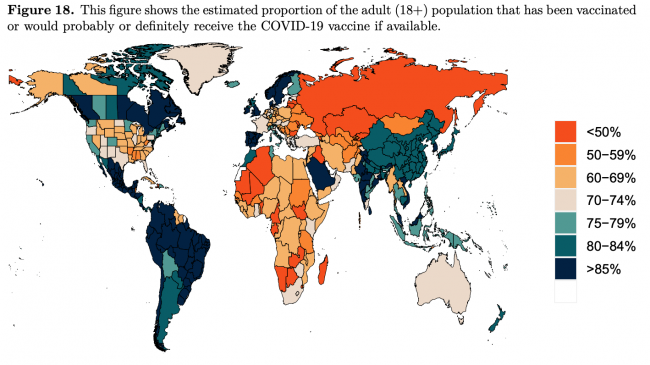 Here in BC, and in Canada as a whole, 80% of the population 12+ has had a first vaccine shot, and 42% are fully inoculated. The second shot rate here is increasing quickly enough that by month-end, almost 80% of Canadians 12+ will be fully vaccinated.

In the US, which had a huge head-start in its vaccination program, new vaccinations have slowed to a crawl and only 70% of those 18+ have had a first shot, while 60% of those 18+ are fully inoculated. Most West Coast and Northern states have 80% vaccination rates, while rates in Southern and Central states are lagging at about half that level.

Anthony Fauci has declared that if he were in a “low-vaccination” area, he would find it prudent to continue to wear a mask wherever he went. Ex-FDA Director Scott Gottlieb says he expects 85% of the population will end up immune, with the choice being how that immunity is achieved: “We now have our choice in terms of how we acquire that immunity; you can acquire it through vaccination or you’re going to end up acquiring it through natural infection.”

IHME data suggests that 40% of Americans have already been infected, and another 5% will likely be infected before “herd immunity” slowly kicks in. That means slightly more — 45% to 40% — of Americans will have acquired their immunity the hard way, with the commensurate risk (to themselves and to the society as a whole) of lifelong, perhaps debilitating, CoVid symptoms. By contrast, in Canada, only 12% will have been infected before “herd immunity” is reached, versus 73% or more who will get immunity from vaccination. That’s a huge difference.

In much of the world, vaccination has barely begun, and citizens in many struggling nations are dependent on their seeming natural immunity to novel coronaviruses, the reasons for which are not yet well understood, but which is a huge blessing for the world, saving perhaps 50 million lives that would otherwise have been lost.

So now what? Once you’ve been fully vaccinated, what do you do if you travel to a “low-vaccination” area? And what do we, as nations with access to adequate vaccines, owe to those without such access? Globally CoVid-19 remains the third leading cause of weekly deaths — 20,000 new deaths/day per IHME estimates, and dropping only very slowly. Although personal risk of catching the disease once fully vaccinated is generally very low, that risk is significantly greater in areas where lots of people, especially if they’re unmasked, are currently infected. And those risks have grown due to the high transmissibility of some of the new variants.

Mask-wearing in the US and UK has plummeted to 25% or less, while it remains at 70% or more in the rest of the Americas and most of SW Europe, South and East Asia. Australia faces a new risk: With one of the lowest infection rates to date due to its Go For Zero strategy, it’s now hugely vulnerable to the new variants because of slow vaccination rates and vaccine hesitancy.

So, as the chart above suggests, even if you’re fully vaccinated, you might want to stay clear of the Southern and Central US states, Eastern Europe, the Middle East, France and Australia, where your risk is, while still low, much higher than in most of the rest of the world.

And, as the chart below suggests, you might also want to stay clear of two additional areas whose citizens want to be vaccinated but who don’t have access to vaccines, so their people are still dying, some would say needlessly, at high rates: South America and Southern Africa. 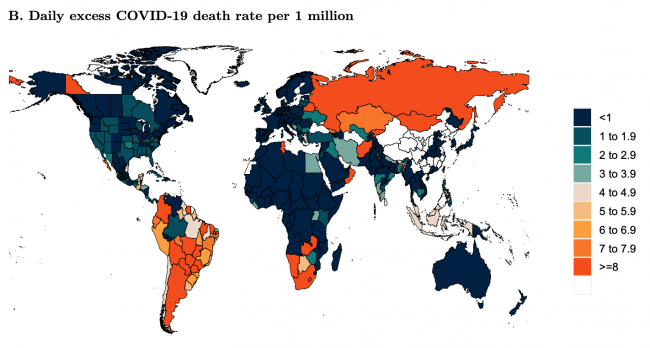 These latter two areas are the ones where, if more affluent nations quickly airlifted them large shipments of vaccines, (a) the citizens would use them and (b) many lives could still be saved. Not much point in sending them to places where vaccine hesitancy is high.

What do we owe those who are unvaccinated or vaccine-hesitant due to ignorance, paranoia, social repression, or misinformation and propaganda?

Well, many more people die of diseases caused by poor diet than from infectious diseases, even during most pandemics — likely five times the number dying from CoVid-19 during this current waning period. These poor-nutrition diseases include most heart and lung diseases, respiratory, brain function, autoimmune, and digestive system diseases. Most of the deaths from these diseases, around the world, in countries rich and poor, could be prevented by simply eating a healthy diet. Due to a combination of lack of access to nutritious food, misinformation from Big Ag, and our cultivated modern addiction to deadly foods, preventing such deaths is probably systemically impossible.

Massive and growing inequality, and the amorality of capitalism, suggest that such deaths will become increasingly more common, even as we grow more and more certain of their insidious causes. And that, as with vaccines, all the education in the world, and all the effort to fight misinformation and disinformation, won’t make much difference at all.

We’re all doing our best, and this, sad to say, is the result. This is the reality of a civilization in its final stages of decline.

2 Responses to CoVid-19: What Do We Owe the Unvaccinated?