Overshoot: Where We Stand Now (Guest Post by Michael Dowd)

My friend Michael Dowd has been researching and writing about economic, ecological and civilizational collapse as long as I have, and he’s interviewed many of the world’s leading thinkers on the subject. In my latest links I mentioned the article in the Salt Lake City weekly where he was interviewed with some of them (Time’s Up: It’s the End of the World, and We Know It). Here’s his “state of the world 2021” summary — a synopsis of where we stand now, and what lies ahead:

Overshoot: Where We Stand Now (Guest Post by Michael Dowd) 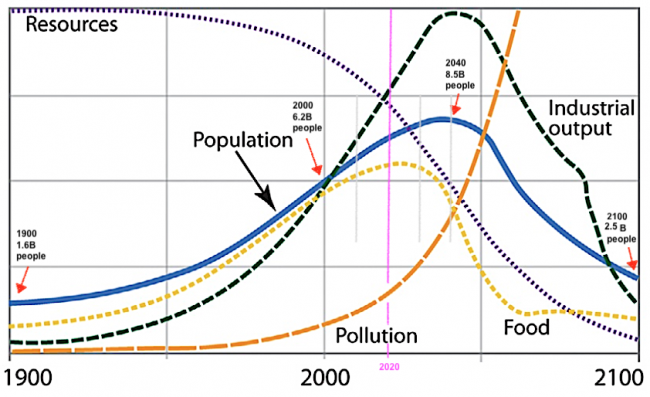 The Club of Rome model, developed in the 1970s, and vindicated as still being accurate in 2000, and again this year by a KPMG study, predicts, with its “most likely” updated-business-as-usual scenario, that human population will peak at about 8.5B people and then drop precipitously to about 2.5B by 2100, based on the planet’s carrying capacity. (NOTE: The LtG authors did not factor in abrupt, runaway climate mayhem and cascading tipping points.)

The single most important book I’ve ever read, by far, is William R. Catton, Jr.’s masterful, paradigm shattering book, Overshoot: The Ecological Basis of Revolutionary Change, published in 1980. I even audio recorded the entire book with permission from his publisher, University of Illinois Press.

Many of us, including Derrick Jensen and Paul Ehrlich, consider Overshoot to be the most important book of the 20th century. Stewart Udall, former Secretary of Interior under the Kennedy and Johnson Administrations, writes in the book’s Foreword a scathing critique of techno-optimism and (what would be called today) eco-modernism. One of the reasons Catton’s book was so transformative for me is because it provides the foundational ecological paradigm for understanding how we got in this mess, the fundamental differences between problems and predicaments, and why, in the words of Richard Heinberg, “Climate change is not our biggest problem; overshoot is. Global warming is but a symptom of ecological overshoot.”

And perhaps no where is this more evident than when pondering the idea (indeed, the empirical reality) of self-reinforcing and cascading thresholds, or tipping points that we have already passed. What follows are some of the main points I make, and text and video resources I recommend, when discussing this sobering realization.

I am painfully aware of how emotionally challenging and potentially depressing is the idea of tipping points that are already in the rear-view mirror! Still, I am convinced after several years of study that what follows is factually and inescapably true. Moreover, I suggest that the sooner we accept this, the more likely we will have peace of mind even in the midst of TEOTWAWKI collapse and the less likely we are to collectively commit geological-scale evil, as I discuss at length in my hour-long video: “Unstoppable Collapse: How to Avoid the Worst”.

I especially recommend my 25-minute video, “New Serenity Prayer: Emotional Support for Climate Anxiety and Environmental Dread”. This short video was created to help people experience as little suffering as possible, now and in the near-term future, by providing a clear and compelling guide for “accepting what we cannot change, changing the things we can, and having the wisdom to know the difference.” This short video is a basic primer on how to stay sane, sober, heartful, and on-purpose in contracting and crazy-making times. It is also now the main introduction to my “post-doom” website and resources related to climate change, ecological overshoot, true vs. faux sustainability, and how to discern what to accept and what to passionately engage in.

A very powerful short (8-min) video clip of HBO’s “The Newsroom” (2014 EPA Segments), is widely considered to be the most scientifically accurate reporting on climate ever done on American TV, and it’s “fake news” – i.e., a fictional TV show. :-) Mother Jones magazine did a fact check after the airing of the above.

It’s now obvious that we’ve already crossed a number of planetary thresholds, or tipping points and that the planet is barreling toward a hothouse Earth.

Despite the way the IPCC, governments, economists, and the mainstream media speak of them, the following tipping points (self-reinforcing and cascading thresholds) are not merely “possible” or “at risk” or “in danger of exceeding” — they’ve been passed. As Toby, the EPA scientist in the above HBO Newsroom clip states:

Here’s the painful truth about our situation being “over”:

… a dozen or more tipping points are already in the rear-view mirror. For example, each of the following is two or three decades into unstoppable, rapidly increasing and cascading, out-of-control (runaway) mode…

What this means, practically, is that, prior to 2030, I suspect that there is a greater than 50% chance of a global economic meltdown and multi-bread-basket failure (2 or more of the 5 main grain growing regions of the world failing in the same year) resulting in further civilizational collapse and several billion or more human beings dying. This is almost certainly unstoppable, unpreventable.

No one need take my word on any of this. In addition to what I offered above, I also recommend:

And it is important that we not ignore (as most Green New Deal, techno-optimist, eco-modernist, and “clean green growth” advocates do), the Aerosol Masking (Global Dimming) Effect:

Finally, I would like to offer the following as food for thought…

(For more on this subject, please see: “Sustainability 101: Indigenuity Is Not Optional”.)

For more along these lines, and especially to experience a wide range of examples of “post-doom” thinking, living, and loving, I invite readers to experience for themselves at least a few of the 80 amazing conversations and wide range of text, audio, and video resources available on my post-doom website.

21 Responses to Overshoot: Where We Stand Now (Guest Post by Michael Dowd)