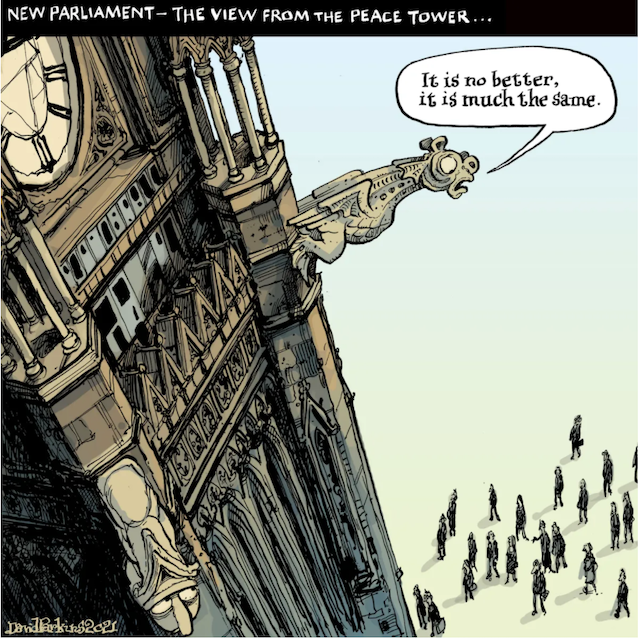 cartoon by David Parkins in the Globe & Mail

Monday was election day in Canada. Nothing changed. The results were essentially identical to those of the last election. If there were any significant changes in voting patterns, they were these:

The Liberal party, which has governed for most of the last century, often, and again now, as a minority government propped up by the near-socialist NDP, is at heart socially liberal but economically conservative. It has been totally gutless when it comes to dealing with economic inequality and climate change, and was hoping to win a majority so it could start ignoring the NDP’s calls for action on these fronts and slide further right. But the Liberals are not heartless, and have been less incompetent at dealing with CoVid-19 than any conservative government.

Under the undemocratic “first past the post” system that the Liberals promised to replace (but then reneged on that promise), the results are about the best that could be hoped for. If we could ever get proportionate representation, we could have a government that looks much like what we have now, but it might be able, and would probably be driven, to introduce more progressive economic and environmental legislation (tax the rich, carbon taxes and pollution penalties, GAI, pharmacare, shift away from non-renewable resources etc). But with the current system, we can expect to see the Liberals continuing to largely ignore inequality and climate change, as they think it’s too politically risky to do more than pay them lip service.

But at least we should be able to avoid the creeping fascism evident in so many other western ‘democracies’ over the past few decades.

So we hold our noses and plug on.