No One to See It

Another attempt to explain that which cannot be explained, and to make sense of that which makes no sense. In other words, more radical non-duality nonsense. You’ve been warned. 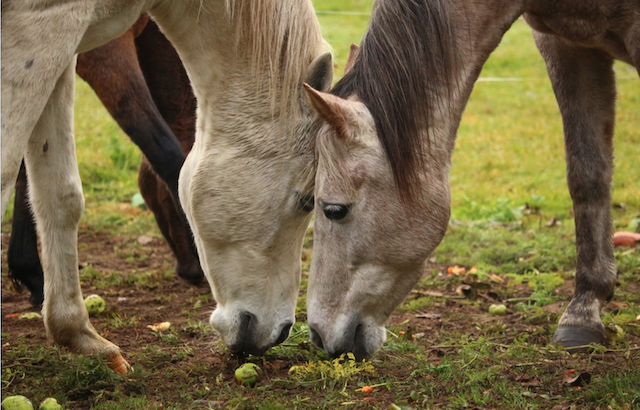 photo from pxhere, CC0 (and yes I know horses shouldn’t eat too many apples, especially cores and seeds)

Perhaps the most challenging question that radical non-duality messengers are asked is: “How can ‘this’  (the realization that there is no one, nothing separate, nothing actually happening, and no ‘real’ time or space — just what’s apparently happening) be seen when there’s no one to see it?”  How can there be seeing without a seer?

The answer is usually that “it cannot be explained”, that it’s “a mystery”, but that nevertheless it’s obvious ‘there’. That’s true, but it’s a very unsatisfactory answer.

When there have been glimpses ‘here’, this was obvious. “How can I not have seen this?” was what was apparently happening. I tried ‘later’ to describe it by saying “Everything was just exactly as it was (apparently), but more than that, there was no need for anything to be otherwise. There was no need for anything to be done. There was no position, in time or space for anything, so nothing was ‘really real’” It was not blissful, or terrifying — it was just astonishing, just obvious.

My attempt to make sense of it was to say that perhaps my brain had altered its neural circuits, in such a way that everything that had been perceived as real was suddenly seen not to be. Instead of a constant ‘making sense’ of everything, assigning meaning and cause and purpose and trajectory to it, there was just acceptance that it made no sense, and didn’t need to make sense.

But that’s just a story, an after-the-fact attempt to ‘make sense’ of what made no sense. There was clearly no ‘real’ brain and no ‘real’ change or movement, so how could neural circuits have been altered?

Dream is only a metaphor, and for many it’s a particularly irksome one, since it suggests that it’s possible to ‘wake up’, and that being ‘awake’ is better or more ‘enlightened’ than ‘living in the dream’. Completely annoying. It’s a useful metaphor, but because of its connotation, not a particularly helpful one.

Though there does seem to be a making-sense going on in nighttime dreams. There is a linking together in a seemingly coherent way of ‘events’ in the dream that are all complete fictions, and the continuity of these ‘events’ is likewise a fiction. It is not even clear whether the apparent neural firing that gives rise to these apparent senses of something happening even occur in the order that the brain gives rise to them.

To be clear, there is ‘still’ a sense of self and separation ‘here’. It has been obvious that this was an illusion, but it is not so ‘now’ or ‘every day’. Though the hold that my self and its machinations have is a lot lighter and more tentative than it was. When you understand that a mirage, or the sun’s rotation around the earth, is an illusion, that doesn’t mean you ‘un-see’ it, but you know that it’s not real.

Here’s another way of trying to explain it: There is sense-perceiving apparently happening, including apparent retina-reacting and neural-processing, and mental modelling and re-presenting, and body-reacting to that re-presentation. That we can all agree upon.

One could then tell a story about that being a successful evolutionary development, which every animal shares.

When one is daydreaming, there can be a sense of complete immersion in what is being dreamt, the sensations of seeing and hearing and feeling what’s in the dream; the body may even react exactly as if what is being dreamt was really happening — a smile, a shiver. The dream, and its objects, do not have to be real for the dreaming to evoke the same feelings as if they were real.

So there is no ‘real’ horse (just horse-appearing), yet there is apple-seeing and apple-eating and probably salivating and pleasure-snorting — and joy-feeling. Full on. In the absence of any thing separate or real.

The invention of the ‘real, separate from everything else’ horse is just the human self’s attempt to make sense of what is seen.

And all of that stuff layered on by the self changes nothing. It’s just a story invented by the self to ‘make sense’ of the apparent apple-eating. If there were no self, there would be none of that layered-on stuff, and no need for any of it. And nothing would change. Nothing would be any different. It would only be seen differently.

The self cannot help making up stories and relaying and relating them to others; that’s what selves do. But the selves are themselves just figments of reality, chimeras, phantasms, mirages. The self is the invented central part of its story of reality, around which it makes sense of everything else.

It seems unlikely that there are illusory selves afflicting non-humans, or that selves afflict almost all humans. The apparent behaviour of a human lacking a sense of ‘real’ self and separation would be (and is) indistinguishable from that of those beleaguered by selves. The model of self that is concocted by the brain is completely unnecessary to perfectly effective functioning. In fact there is evidence that only in the last several millennia did the human brain evolve in a way (the so-called breakdown of the bicameral brain) that made the construction of the illusory sense of self even possible.

So it is likely that there are many apparent humans who have no sense of self and separation. Because the presence or absence of the illusory self makes no difference to behaviour, even if your dearest friend lacked one ‘like yours’ you would never know. They would use terms like “the self” metaphorically, as indeed we all do. They would just mean something very different by it from what you mean. And neither of you would ever know.

Of course, all of this is just a story too.

That’s as close as I can get to an explanation, in language, of how there can be seeing of this — the outrageous assertion that it’s obvious there is no one and no thing separate from everything — without a seer. And how this can be seen, or not seen, and how it makes no difference to what is apparently happening.

Except to the self, of course, to which it makes all the difference in the world.

2 Responses to No One to See It