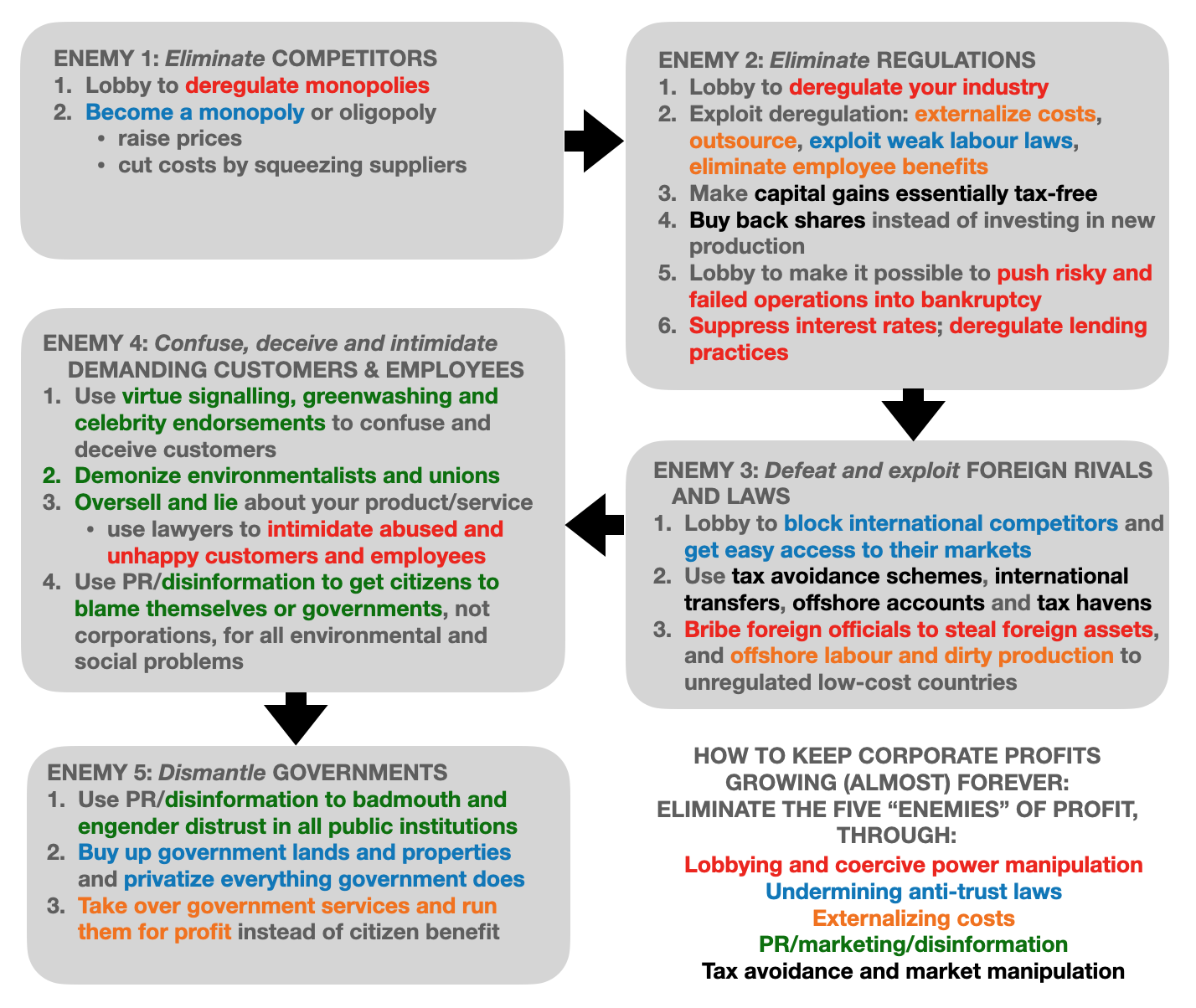 The idea of a corporation was originally as a means for a group of people to pool their resources to do or get something that none of the members could manage individually. That is, it was a communist idea — share things among community members for their collective benefit. Many co-ops and ‘buying groups’ continue to operate on a similar basis. In this idea, one’s ‘investment’ often includes contributing some form of work that advances the collective benefit, not just a loan of funds.

Because civilization had ushered in the idea of public property (“commons”) vs private property ( “estates”), the idea ran into the inevitable problems of “ownership”, “rights” and “liability”. It would take a much longer article to explore what’s wrong with that idea, but suffice it to say that most tribal and confederated cultures had no need for the idea of property — the people belonged to the land, and the people, as its stewards, collectively decided how the land would be used for the community’s benefit. I visited a remote culture a few years ago where this was still the case. As The Dawn of Everything effectively argued, this tribal sensibility scales a lot better than one might think.

But for whatever reason, ‘civilized’ cultures have fought thousands of wars over the ownership of property, and continue to do so. So soon corporations were allowed to own property, and were given rights. And to continue to enable them to raise funds for larger and larger projects, they were granted ‘limited liability’, on the basis no one would allot personal funds to a project if they could end up losing more than the money they put into it, through no fault of their own. And so, the die was cast.

Going back to the idea of a corporation, it was not, in fact, an entity, but rather an agreement. Agreements are the basis for many things in most cultures — currencies and marriages and markets, for example. But what bothered the new ‘capitalists’ — people who made a living arranging such agreements — was that these agreements are only good as long as the agreers are alive. They were also bothered by the fact that different people put more money into projects than others and expected appropriate compensation for their risk.

As a result, the idea of shares, and shareholders, was born. Shares could be unequally distributed, and would live on with a new shareholder when a shareholder died, or wanted to trade it to another. So corporations, and their shareholders, no longer existed for the purpose of financing or otherwise arranging an agreement among trusted peers. Instead, corporations became creatures whose purpose was tied to whatever the ever-changing shareholders wanted it to be. And those shareholders increasingly did not even know each other.

Some low common denominator had to be found to satisfy all present and future shareholders, and the one that was agreed upon was: to optimize the return on the shareholders’ investment. In other words, to earn a profit. That profit was a very rough surrogate for the benefit that the original ‘communist’ corporations might have received from their known-and-trusted community members. But it removed the requirement that the corporation’s activities be focused specifically on meeting the articulated collective needs of the agreers (the shareholders) because Who could possibly know what their collective needs now might be, if there even were any? If that didn’t meet the morals or principles of a shareholder, or if they didn’t have the money to buy a share, well, they could go back to using a ‘communist’ collective agreement. The new ‘shareholder agreement’ was far more versatile, and independent of knowledge of the shareholders or their needs, and was also far more scalable.

This idea of earning a profit as a means of compensating investors was very different from the traditional idea of return on investment (interest or rents). It played very well to the working and merchant classes, because earning interest and rents was viewed (with some justification) as a rather deplorable process of the rich property-owners charging working people for the use of their property, essentially making money by doing nothing. “Nice work if you can afford it.”

But the problem with this new scheme is that, if the shares were to be worth anything, given that there was some risk of loss of one’s investment involved, the potential profit needed to be large enough to justify the risk. That means that profits would have to go up every year, forever, so that the value of the shares could be justified by the present value of all future cash flows from the corporation (dividends, if any, plus capital appreciation) even when discounted at the high-risk cost-of-capital rate.

Who in their right mind could possibly believe that any corporation’s profits would go up by a significant amount every year forever? That’s the question, and that’s the point that led to capitalism morphing from being a beneficent means of raising funds for collective capital projects for mutual benefit, to a Ponzi scheme, a religion for believers in either the myth of perpetual growth, or their capacity to gamble money so shrewdly as to come out ahead, repeatedly and sustainably, in a zero-sum game.

So far, so bad. At least at that point you had (i) a regulatory system that investigated, prohibited, and ‘broke up’ monopolies and oligopolies in any industry segment, and (ii) a balanced economy where public organizations provided the goods and services that were not ‘profitable’ enough for private corporations to offer — public institutions and services, funded by tax dollars.

But once the corporation had been reinvented to singularly pursue profit and to require large annual increases in profits every year forever, the essentially pathological nature of this amoral, impossible and singular pursuit became evident, as the book and film The Corporation so brilliantly showed (and the sequel film, The New Corporation, is just as good, though ironically it has been taken off YouTube due to alleged copyright violation).

So what do you do if you’re in charge of a corporation and you’ll be rewarded if and only if its profits increase dramatically every year? The graphic at the top of this post provides some common, and logical strategies.

Here’s a walk-through of these steps, which are designed to eliminate the five ‘enemies’ of endlessly increasing profits:

At this point, there is only one ‘enemy’, one ‘competitor’ left, to be eliminated: government, offering essential services that do not depend on generating profitable returns. So:

None of this is inherently ‘evil’ behaviour. It is perfectly rational amoral (not immoral) behaviour designed to generate a perpetual, steady increase in profits every year. It is what corporations and their executives are specifically employed to do and rewarded for doing.

There is no putting this genie back in the bottle**. It is inevitably leading to massively inequitable distribution of wealth and and a completely dysfunctional, citizen- and customer-loathing, oligopolistic, corporate-dominated economy. It is going to collapse because it is overextended, drowning in un-repayable debts, and completely unsustainable. And because it utterly fails to meet the needs of the majority of the population it was designed to serve.

We saw in the 1930s, in many countries, the types of steps that are possible to take when the existing economy is in shambles and there is a collective will to build something new that works equitably for all citizens. Sadly, in the 2030’s, even if we have the will, we will no longer have the means, in a globally, economically bankrupt economy, to do anything on any scale. We have given away the power and leverage we once had that could sustain a balanced economy.

As with CoVid-19, we are going to be left to our own resources to figure out how to make ends meet in a radically broken, ravaged, dysfunctional civilization. Capitalism seemed like a good idea in its early days. But like many ideas and technologies (eg plastics, nuclear energy, private automobiles) it has proved utterly dysfunctional in practice and at scale.

As ghastly as the resultant economic collapse is likely to be, it may lessen, to some degree, the horrific damage that 7.9B people and a run-amok global capitalist economy have wreaked on our planet, though not enough to prevent ecological collapse from following economic collapse in short order.

We did our best, taking capitalism and other seemingly good ideas, and trying to put them into practice, only to lose control of them and watch as they have created vastly more harm than good. The outcome was inevitable from the start, had we been able to foresee it, and we are now starting to live with the dreadful consequences. It’s going to be interesting.

* “Lobbying” is, in effect, legally bribing, and strong-arming, politicians, with offers of huge campaign donations, and jobs if they lose their seats and threats if they don’t toe the line. Although ‘bribe’ is a charged term, it’s a calculated and accounted-for “cost of doing business” in most of the world, including large swaths of the Global North.

** There are a lot of idealists who would have you believe we can ‘reform’ the economic system by changing the mandates of corporations, re-regulating businesses to prevent abuses, and reestablishing public institutions and services in a balanced economy. That’s another great idea, but it is now completely unfeasible:

3 Responses to Capitalist Oligarchies See Governments As Their Last Competitors