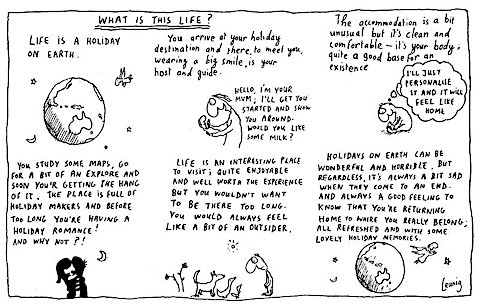 August in many countries is the month for holidays, for rest, for reflection and preparation for the slog ahead. At one time it was the month where you were most likely to see people outside, enjoying the year’s best weather. Now, it’s become the month of scurrying to get things done before the heat, the month for seeking shade, and the month for blackouts.

It’s starting. This is how it goes. 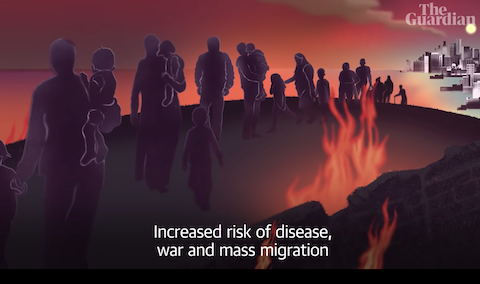 Soon the world will be unrecognizable: Robin McKie, science editor for The Observer, writes: “The crucial point [according to climate scientist Bill McGuire] is that there is now no chance of us avoiding a perilous, all-pervasive climate breakdown. We have passed the point of no return and can expect a future in which lethal heatwaves and temperatures in excess of 50C (120F) are common in the tropics; where summers at temperate latitudes will invariably be baking hot, and where our oceans are destined to become warm and acidic.” Countering some of the climate scientists he knows who are afraid to tell the truth, Bill says:

In confidence, they are all much more scared about the future we face, but they won’t admit that in public. I call this climate appeasement and I believe it only makes things worse. The world needs to know how bad things are going to get before we can hope to start to tackle the crisis.

Richard Heinberg’s defensive pessimism: “The most helpful attitude from here on will be a refusal to accept the inevitability of the very worst outcomes. It is a stubborn insistence on imagining alternatives to growth and working hard to realize them—while acknowledging that most of our existing technological and social structures were designed during the era of expansion and will likely fail under conditions that are now emerging… This century, as those centralized systems fail due to lack of energy, broken supply chains, and the consequences of climate change, new grassroots social structures will need to spring up to meet basic community needs.” He goes on to list the types of new structures this will require.

Blistering summers are the future: “Will our children grow up being scared of summer?” Thanks to John Whiting for the link.

Sri Lanka continues to be the canary in the mineshaft: Building on last month’s series of articles, Indrajit Samarajiva explains what is happening there:

Now that global empire—standing athwart history yelling ‘stop!’—is collapsing, its two legs of capitalism and democracy are both crumbling. In Sri Lanka you can see them fall. But don’t take my word for it. Read (non-vulgar) economist Michael Hudson’s article, The End of Western Civilization. It tells you a lot about where we are. [Michael’s article is a long read, but it’s important. It explains why economic collapse will precede ecological collapse, leading to the end of our human civilization. Indrajit goes on to explain how this is playing out there now. And in a separate article, he describes the overwhelming mental illness that accompanies the fall.] 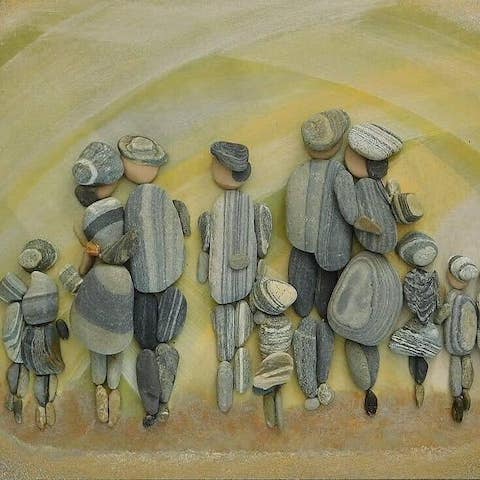 Our epidemic of malnutrition: David Oke describes the source of the failings of our industrial food and medical systems, that have led to less healthy lives even as medical costs spiral out of control, and suggests some solutions (thanks to Flatcaps and Fatalism for the link, and the one that follows):

The twentieth-century shift in mortality from infectious to noncommunicable disease—what demographers call the “epidemiological transition,” linked to the “nutrition transition” that reshaped global diets—largely eradicated diseases like polio and yellow fever, but it did not lead to conditions of general health. Instead, it created populations that are chronically ill, and thus require near-constant medical attention; in turn, healthcare systems shifted from treating acute diseases to managing populations that are permanently, but “manageably,” ill. More medicine than ever, but less health.

Seventeen theses on disability: Freddie deBoer’s blunt and powerful explanation of the realities of disability and how modern identity politics makes everything worse for those actually dealing with it.

The possibility of direct democracy: Indrajit explains how political collapse in Sri Lanka has given its citizens a brief taste of what a system of real, direct democracy might look like.

Free up doctors (and pharmacists) to prescribe safe drugs to replace street drugs: Canada’s associate Minister of Health seems to finally get it. Sadly, her boss and her department are still resisting the radical changes needed to address Canada’s toxic street drug death toll, which remains higher than our CoVid-19 death toll each year, and is still rising. 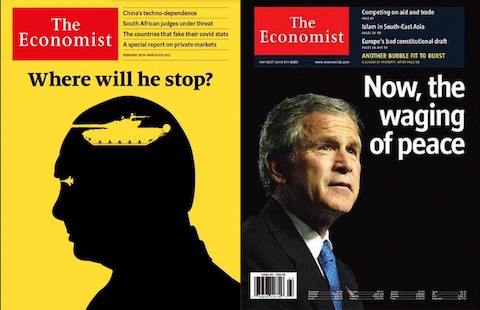 propaganda posters used as covers by The Economist; exposé by Indrajit Samarajiva

Patrick Lawrence on the decline of western media: The long-time foreign correspondent writes passionately, articulately and courageously (enough that Twitter has “cancelled” him) about how media once devoted to critical thinking and investigative reporting have become zealous scribes and propagandists for western political and corporate interests. Some recent examples of his work:

Noam Chomsky and the larger picture: Speaking of history and context, Noam (another guy who’s basically blacklisted from western mainstream media) is taking every opportunity he can to provide some clarity and background on what is happening, especially when it comes to ecological collapse. Some of his recent takes:

It’s not hypocrisy, you’re just powerless: NS Lyons is the pseudonym for an established conservative commentator, who often addresses conservative conferences. When I first stumbled on his recent satirical article about castism/classism, I thought it was written by a leftie lamenting the stranglehold on power held by the war-mongering, corporatist, fuck-the-environment white empire that controls all the major parties in the west, leaving the left as a powerless “Class B”. It was only when I read further (including the comments and some of his other writings) that I discovered that his Class A is actually “Woke” America, which apparently includes all liberals, universities, uppity minorities, the angry poor, criminals, atheists and other non-Christians, illegals, and soft-on-crime Democrats. His poor oppressed Class B? Aggrieved over-taxed capitalists, Republicans, Christians, conservatives, and the working class. Mind-bending.

CoVid-19 continues to rage on, out of control: Short takes:

*In their own words: Terrifying excerpts from recent actual speeches made by senescent US leaders. The US desperately needs a mental competency test for its current and aspiring political leaders: 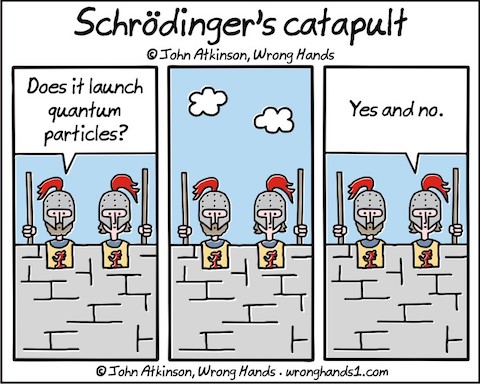 The ability to see what’s useful and what is not: Interesting review of David Foster Wallace’s writing and the “attempt to make art moral”.

Why there are no stock market experts: Canadian YouTuber Veritasium defines the four things it takes to be an expert, and explains why when it comes to complex systems, there can be no experts. (They are: A ‘valid’, predictable, rules-based, finite-variables environment; Many repetitions to learn from mistakes; Timely feedback on where you’ve made mistakes; Deliberate practice focused on areas where you most need improvement.) Also from Veritasium, Fritz Haber, the man who killed millions (chemical poisons) and saved billions (chemical fertilizers).

Lost letters of the alphabet: How English jettisoned some letters you still see traces of in old documents.

They’re lying to us: From reader and friend Djô Rudigoz, a brilliant French protest song by Gérard Manset. Also from Djô: A song from Phoenix backed by animated art classics. And from there: Stunning CGI visuals to a song by Sagans.

How some people learn just from YouTube demos: An astonishing dub-step performance by a young woman, entirely self-taught.

Road signs for your co-workers: A clever “re-working” of common road signs.

What you dance to: For me, it’s Haitian Kompa/Zouk music and K-POP. For my friend Dave Smith, author of the wonderful To Be Of Use, it’s self-composed Electro-Swing.

The essence of all great music is surprise: Rick Beato explains how to achieve it.

How to survive a heatwave: Cartoonist First Dog On the Moon tells us how, hilariously. Advice for Brits, but it applies to us all. Thanks to Hilary Neilson for the link. 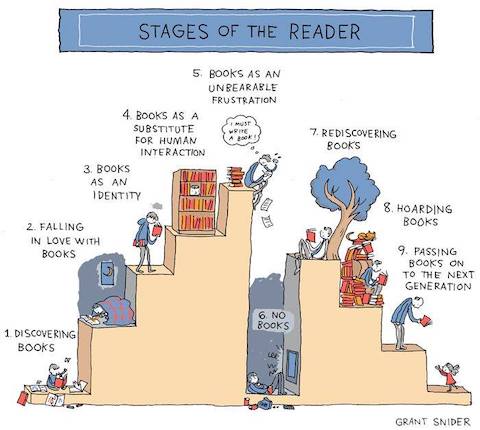 From Caitlin Johnstone, Trapped in the Slaughterhouse:

Western civilization is a story of full bellies and starving hearts. Of a feast of information and a famine of truth. Of conveyor belts churning out processed food, conformity-enforcing media and power-serving culture. Enough food to stay alive but not enough sustenance to live.

They keep us alive but they don’t let us live. They give us enough carbohydrate to turn the gears of industry, but they keep us too busy, poor, propagandized, confused and crazy to actually drink from the waters of life. To actually experience the beauty of this world. To let the crackling potentiality of advanced terrestrial life blossom to fruition within us.

The modern empire rules us by filling our markets with Wonder Bread and our schools and media with lies. By filling our bellies and starving our souls. By churning out mountains of useless landfill without ever producing anything of real value. By making more while providing less.

They improve food production and medicine just enough to lengthen our lifespans, only so that they have more life to drain us of. They let us populate the earth with more humans only to drain us of our humanity. We’re not people to them. We are batteries. We are fuel.

From Indrajit Samarajiva, on Protest and Democracy:

The ruling classes have tried their best to bury the People’s Assembly, but it’s still there, and it still spontaneously reforms in town squares when it’s needed. We have to look deeper at our democracies and really struggle to constitute them beyond a constitution. We have to fight for them, we have to question them and we have to quite honestly tear liberal democracy up and start over, from first principles. We’ve also got to get rid of this idea that there’s one perfect form of democracy for all and that white people found it and can bomb it into everyone. Democracy is a constant struggle, an Aragalaya in Sinhala. The struggle must go on.

From my friend PS Pirro, It’s Just What Was:

Maybe we’re too close, maybe it’s too soon. We walked through those malls. We worked in those factories. It wasn’t great. It’s just what was, and now it isn’t anymore.