Nothing Has to Make Sense 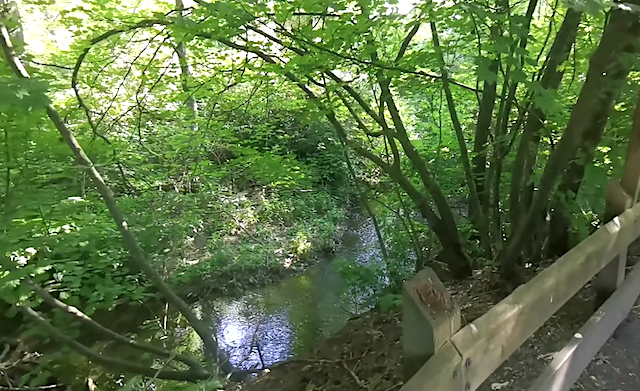 image of Hoy Creek Trail; screenshot from the video linked below from KWG Vids

One of my favourite walks, just a couple of minutes from home, is the Hoy Creek trail that runs from the “city centre” (which is actually in the NE corner of the city) in a meandering course about 8km to the north edge of city centre park, with its many sports grounds and Lafarge Lake (a well-maintained and night-lit artificial lake named after the cement company that ‘donated’ it).

It’s a bit like going back in time — suddenly all the modern high-rises become invisible through the foliage. The trail is surrounded by trees, a small park buffer on one side, and the creek which it criss-crosses several times. The housing that is visible is mostly older but well-maintained (what might be called ‘stately’) low-rise apartment buildings whose visible balconies are full of shrubs and plants and easy chairs.

These apartments give me flashbacks to my very first home on Middle Gate in Winnipeg, when I was only one or two years old. I vaguely remember the ornate heating vents and plush carpets (eye level at that age, I guess), and somehow I remember the walk to the Assiniboine River, on a narrow forest pathway that still exists today. I sensed the forest and river as something magical, incongruous with everything else I perceived in the world. These are my earliest memories of trying to make sense of what made no sense, finding that attempt to be unhelpful, and resigning myself to just accept, and wonder. That felt right, back then.

As I walk I am ruminating on the habit of sense-making. The human self, I am coming to accept, is even less than an illusion — it is a process, the obsessive process of sense-making, which the brain has personified to provide a conceptual centre from which to map all its frenzied sense-making.

The brain is conditioned, by the examples of other humans’ brains, to consider sense-making a good and necessary thing, when it is actually neither. We do not, and cannot, ever know even a tiny fraction of what is actually happening, so we cannot possibly really make sense of anything. Yet we are compelled to try, and that compulsion is the basis for humans’ limitless anxieties, hatreds, jealousies, envies, despair, sadness and depression. We believe, erroneously, that we have made sense of things, and we do not like what that sense-making tells us is true.

Most of us, in fact, depend for our reputations, our social status, and our jobs, on our apparent facility at sense-making. Executives, decision-makers, analysts, op-ed writers, ‘pundits’ and consultants are mostly paid and listened to on the basis they make sense better than we could without them. It’s a farce, but as long as we all believe it, it will remain ‘true’.

It is beginning to dawn on me (as, perhaps, it did when I was two) that not only does nothing ‘make sense’ in the way we want to believe it does, nothing has to make sense. Everything that is apparently happening in the world is happening despite all our sense-making, which is just after-the-fact rationalization of what has inevitably, and only apparently, happened. Our sense-making has affected, influenced and changed nothing.

We are all frauds, pretending to play important roles when all we’ve really done is dress up, climb on stage and read the important- and knowledgeable-sounding lines of the characters assigned to us. Somehow, as a very young child, I ‘knew’ that. And then I forgot.

My walk has taken me to the salmon hatchery, an innocuous looking shed run by the local volunteer watershed conservation society. These volunteers also label local storm drains with salmon logos to remind residents not to allow oil, paint, soap, detergents, herbicides, insecticides, antifreeze or fertilizers to be washed into these drains, which empty into fish-bearing creeks and rivers.

The path is frequented by raccoons and deer and the occasional bear, and at certain times of day and night by small congregations of people, both neighbours gathered to eat or smoke together, and some others who look pretty down on their luck. They all seem to coexist with the apartment dwellers, I suppose as long as everyone minds their own business.

All of this — the creation and maintenance of the trail, my walking along it, the fish in the creek, the bears and raccoons that wade into the water to catch them, the people gathered together around the trail benches, and those that sleep by the creek, out of sight — is happening for no reason, not because anyone has made a conscious choice or decision. We are all just acting out our conditioning.

There are no limits to what our conditioning will bring us to do. I think about Ukraine, Afghanistan, Yemen, propaganda, lies, horrific and preplanned violence.

No choice. No limits.

I think about the word ‘maintenance’, which is, it seems, everyone’s job these days, foolishly trying to hold off the inevitable collapse of everything. The word comes from the Latin words meaning ‘to hold in your hand’. No one can hold anything in their hand for very long. The French word maintenant, from the same root, means ‘now’. Of course, there is no ‘now’. Time is just a construct, a way of making sense. The moment we sense that there is something in our hand, that moment has already gone.

I pick up a leaf, and toss it into the air. The leaf, my hand, all of it, is no longer there.

Back on the bustling city streets, I try to listen to the voices of the people I pass. I have started to learn to distinguish Chinese languages from Japanese and Korean, by the lilt, the length of words, and the stresses of syllables (Korean has no stressed syllables, which, when carried over to their pronunciation of English, is quite striking). And I’m starting to be able to distinguish Farsi, especially when I hear French words sprinkled into conversations (French was the second official language of Iran for many years).

But of course I don’t know what they are saying. So instead I pay attention in other ways: body language, facial expressions, tone of voice, hand movements. I am not trying to make sense of it, just listening, noticing. The nuance of a touch, a snort, a leaning in, or a leaning away. We say so much, even when we are not speaking.

Back in the apartment, staring out at the garish spectacle of thousands of lights within my amazing, panoramic view of this beautiful, terrible city, I listen to a YouTube video of Khatia Buniatishvili playing Rachmaninoff’s Second Piano Concerto. I occasionally glance down, through my tears, at the video, and marvel at the movement of her hands. And more than that, though she is mostly playing with eyes closed, I marvel at how intently she is listening to, and speaking through her hands with, the members of the orchestra. This is not just an astonishing performance; It is a conversation.

I will spend the rest of my life trying, mostly badly, to learn to listen better, to pay attention to the wonders that my sense-making brain quickly, automatically, and uselessly, replaces with their ‘meaning’. This exquisite territory, this everything, papered over with the brain’s representation, its dull, drab, two-dimensional map.

It makes no sense.

4 Responses to Nothing Has to Make Sense