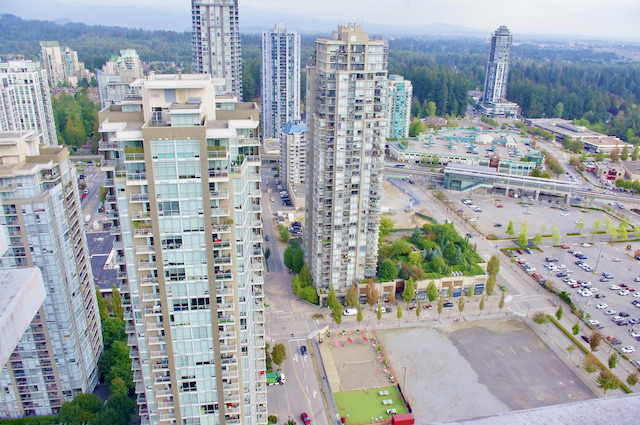 In a foreign land
There were creatures at play
Running hand in hand
Needing nowhere to stay
Driven to the mountains high
They were sunken in the cities deep
Livin’ in my sleep.
I feel like goin’ back
Back where there’s nowhere to stay

The crows are back. They’re gathering again each evening in their staging areas, including our apartment rooftop, for the group migration to the Still Creek roost, which sleeps perhaps twenty thousand of them each night, drawing from the entire metro Vancouver area.

I watch them from my own ‘perch’, a hanging basket chair on the roof, 115m above the ground. The people and cars below remind me of aphids and ants, scurrying around endlessly.

A boy on an electric scooter weaves in and around cars and pedestrians, switching between road and sidewalk, moving much faster than the traffic-bound vehicles. Scooters are perhaps the true ‘hybrid’ vehicles, more versatile than electric bicycles. They are even tolerated (sometimes) in malls, eliminating the need for parking. (You can’t rent them here, so the hatred over their misuse and the ‘litter’ when they’re ‘abandoned’ in the streets has not yet arrived here.)

It’s easy to fathom, from this height, this distance, that people are, after all, just another species of animal. All following our conditioning, biological and cultural. Just like the crows, except we are messier and more destructive.

Humans make up just 2% of the biomass of the planet’s animals, and all animals combined make up just 0.5% of the planet’s total biomass. In terms of total mass, despite our grotesque overpopulation, humans are dwarfed by arthropods (crabs etc), fish, worms, insects, mollusks, jellyfish, and even our own farmed animals. Bacteria outweigh all animals combined by a factor of 30, and humans by a factor of 1200. Even viruses outweigh humans by a factor of 3, though it takes a quadrillion (1015) of them to collectively weigh one gram.

We are overachievers, though.

As I watch from my perch, it’s easy to imagine that everything that is moving is equally ‘alive’. The cars ‘eat’ plant fossils, though they need our help to do so (but give them time; an ant sucking dew from one of its aphids looks eerily similar to a human ‘feeding’ its car gasoline). The cars and the scooters and bicycles and space shuttles have a simpler form of ‘conditioning’ that determines where and how they go, and their makeup is pretty simple compared to humans’ and viruses’, but still.

We have created other ‘creatures’ that ‘move’ and ‘grow’ in less animal-like ways (like money, and corporations, and computers, and nuclear facilities), but these creations are so dominant now in terms of what gets done on the planet, and what gets consumed (eaten) and destroyed in the process, it is not hard to conceive of these ‘artificial’ life forms as just one more kind of evolved creature, like us. And like the crows which, without judgement, take them all for granted.

What apparently gives us the arrogance to believe we are a more ‘advanced’ type of creature, is the belief that we have “conscious” free will and choice, unlike all these other creatures, from viruses and bacteria to fungi and plants to machines that travel from place to place and machines that do not. We are in charge, we think. We are the masters of the universe. All these other creatures are simple and dumb, condemned to do what they’re told, while we, the crown of creation, can do anything we want.

I sip on my tea, far above it all, and watch, as if I were watching through the glass sides of an ant terrarium. Are the people driving the cars, or are the cars driving the people?

Three crows perform their airborne dance in the updrafts between the apartment towers, taking turns chasing each other, cawing in apparent delight. Below, in the pop-up park, two girls practice gymnastics moves, ending each careful tumbling run with a triumphant raising of the arms, followed by a fit of giggling and falling on the ground.

A girl nearby employs one of the mini-park’s hammocks as a makeshift swing, and then restlessly clambers up its supports and onto the adjacent eight-foot-high fence, sitting astride it. We are tree-dwellers, we humans, naturally meant to climb. I wonder when, and why, we each lose the passion for doing so?

There is a pattern to the use of the ‘beach’ volleyball section of the pop-up park. During the day it is mostly occupied by small kids with pails and shovels, sometimes in large squads with identical neon vests. From dinner hour ’til dark it is often the scene of serious games, up to six-on-six. But now is the in-between time, when it’s often empty. Today a young couple is practicing keeping the ball in the air, back and forth across the net, as long as possible. They’re intent, watching for signals of each other’s moves. It’s like watching a couple dance.

I remember watching a crow repeatedly dropping a pebble in mid-air flight, and then swooping down and grabbing it, only to drop it again, over and over. I remember watching swallows playing with a feather, likewise in mid-air, for almost an hour. Practice is play. And every joy is just a practice. Doesn’t matter if its the clumsiness of a beginner’s first flight (or first love), or a master performance. It is all just practice, just play, for its own sake.

And now, here come the crows. Starting with small groups of two or three, over the next couple of hours their numbers will swell to fifty or more, in raucous groups on one or two of the nearby apartment roofs. Greeting or introducing themselves to each other, conveying the day’s news.

2 Responses to Creatures at Play