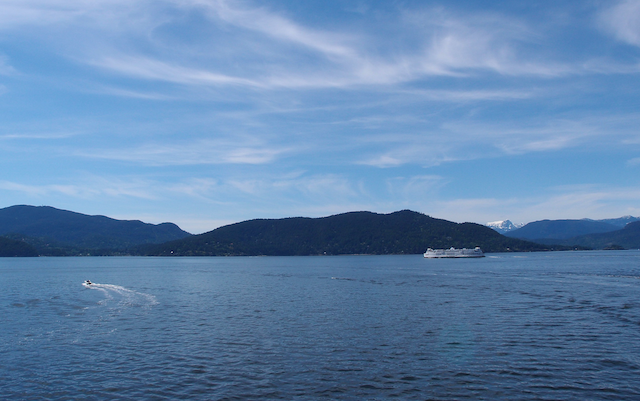 I am on the ferry, on a visit to Bowen Island, where I used to live. I had forgotten how exciting it is for small kids to be on a “big boat!”  There are lots of kids running around asking questions: “Is that the real ocean?” “Are there sharks and whales down there?”

The kids on the ferry are gathered around an as-yet-unadorned plastic Christmas Tree at the front of the passenger deck of the boat. “It looks so sad, all naked without any ornaments. Can we ask the captain if we can help decorate it?”

We may smile at this, but this capacity and tendency to personify and anthropomorphize non-human creatures and things is well-entrenched in the human psyche. I confess that I have cried after throwing out stuffies (plush animals), even ones I have not been particularly attached to. I have even cried when saying goodbye to my car when I traded it in. What is it about us, and about them, that causes us to react so emotionally, so sentimentally? Sometimes more sympathetically than in our responses to living creatures’ suffering.

We’re crossing the Salish Sea, the eastern edge of the Pacific Ocean, protected by Vancouver Island. It’s dark, and the water is so smooth that the reflections of lights are unruffled, as sharp as the original. They make me think about my recent experience looking in the mirrors in the gym, reflecting my body in all directions, and causing me, for a moment, to lose track of which body was ‘real’ and which were mere representations. I’m not sure that I wasn’t closer to the truth when I had no idea which, if any, was ‘real’. Sometimes we’re so sure we know things, when we cannot.

As the ferry moves out of the cove, I can now see the strait that opens into ‘open’ ocean. I’m a non-swimmer, but the ocean is beckoning me, calling me out with some ancient reminder that we all began in the ocean (even those creatures adapted to the land who still, until birth, swim with webbed hands in an interior ocean). We are all, I think, all our lives, still looking for the way home.

This is why I call Neil Young’s Will to Love (about salmon swimming upstream) my ‘soul song’ (though I no longer presume to have a soul):

I remember the ocean, from where I came,
Just one of millions, all the same,
But somewhere someone calls my name,
I’m a harpoon dodger, and I can’t and won’t be tamed.

There are whales dying in large numbers off the coast. We don’t want to know why. The ocean remains the home to the vast majority of living creatures, and most of Earth’s total biomass. Yet we have carelessly poisoned it, littered it, far more even than we have desolated the land we migrated to. We didn’t do it deliberately. We feel bad about it, but seek to blame others for it, when no one is to blame. This is what humans in their ‘civilized’ state are conditioned to do, cannot help but do. It’s a tragedy, but one without monsters, without villains.

It’s a most unsatisfactory plot, this ‘story of us’, one that we are not anxious to explore to its end.

On the ferry, a little girl in a fairy princess dress dances around the poor, forlorn Christmas tree. You can see the shifts in her movement, from oblivious and inspired and improvisational, to self-conscious and nervous and ‘performing’. I want to see her wand light up and suddenly bring the tree to life, adorned and sparkling.

There are a lot of things I want to see in the world. I want to see a world in which little girls can just be who they are, without having to be cautious, alert, reserved, suspicious. Without having to be warriors, and without having to be twice as smart as little boys. A world where it’s safe to be shy, or to be spectacular. A world where girls can be boys and boys can be girls, without provoking a discussion about surgery. A world where pretend and make-believe are fine, where a magic wand, or a green button (but not a trigger, please) can transform the world for the better in the eager, earnest mind of a child who, unlike so many of us who’ve forgotten, knows the meaning of play.

We are a mess of chemical reactions, a cauldron of chemical soup. We hate, we seethe with jealousy and envy, we are paralyzed by anxiety and shame. We have no choice. This is the result of a million years’ conditioning, leaving us exhausted and rendered dysfunctional by a brain that tries so hard to make sense of what does not make sense that it sickens the whole creature, causes it to react, and overreact, to everything, causes it to misunderstand and project and judge and create its own causes for suffering.

Every judgement, I am starting to think, is a misjudgement. We want to see causality, intention, consequence, because then, we hope, we can understand, predict, keep ourselves safe. It is a mad illusion.

It is no wonder our word for mental illness is disorder.

This clip is an 8-second excerpt of a short doc by Journey to the Microcosmos; you can see Tardigrades easily with a $19 microscope and a trip to the garden or park

If only we could strip away this veil of the need-to-know, to make sense of everything, this ill-conceived illusion of control and self-control. And see and be like wild creatures again. Needing nothing, as we were before we were torn from our mothers’ dark and quiet inland seas, and cried the cry of the separate, the lost, the bewildered. The having-to-know. This spilled-out little cauldron of chemical soup, wanting only and forever thereafter, to be home.

Cocooned in the Skytrain coming home, speeding through the dark, my self relaxes — for a few moments there is nothing to decide, nothing that needs to be known or done. Most of the other spilled-out little cauldrons of soup are hunched over their phones. I try to pay attention to them without judgement, without analyzing, without trying to make sense of their actions and demeanour, without trying to guess their state of mind or motivations. Why is this so hard?

Just one of millions, all the same

I imagine us all, me and these slumped passengers, as trained bears, doing as we were conditioned, returning to our lairs from the circus where we work and where we receive the food we can no longer provide for ourselves. Padding back and forth in these little cages without bars. It’s the only life we know, now. The ocean, from where we came, is just back there, but it’s a lifetime, a million years, away, long forgotten.

This entry was posted in Creative Works, Month-End Reflections, Our Culture / Ourselves. Bookmark the permalink.