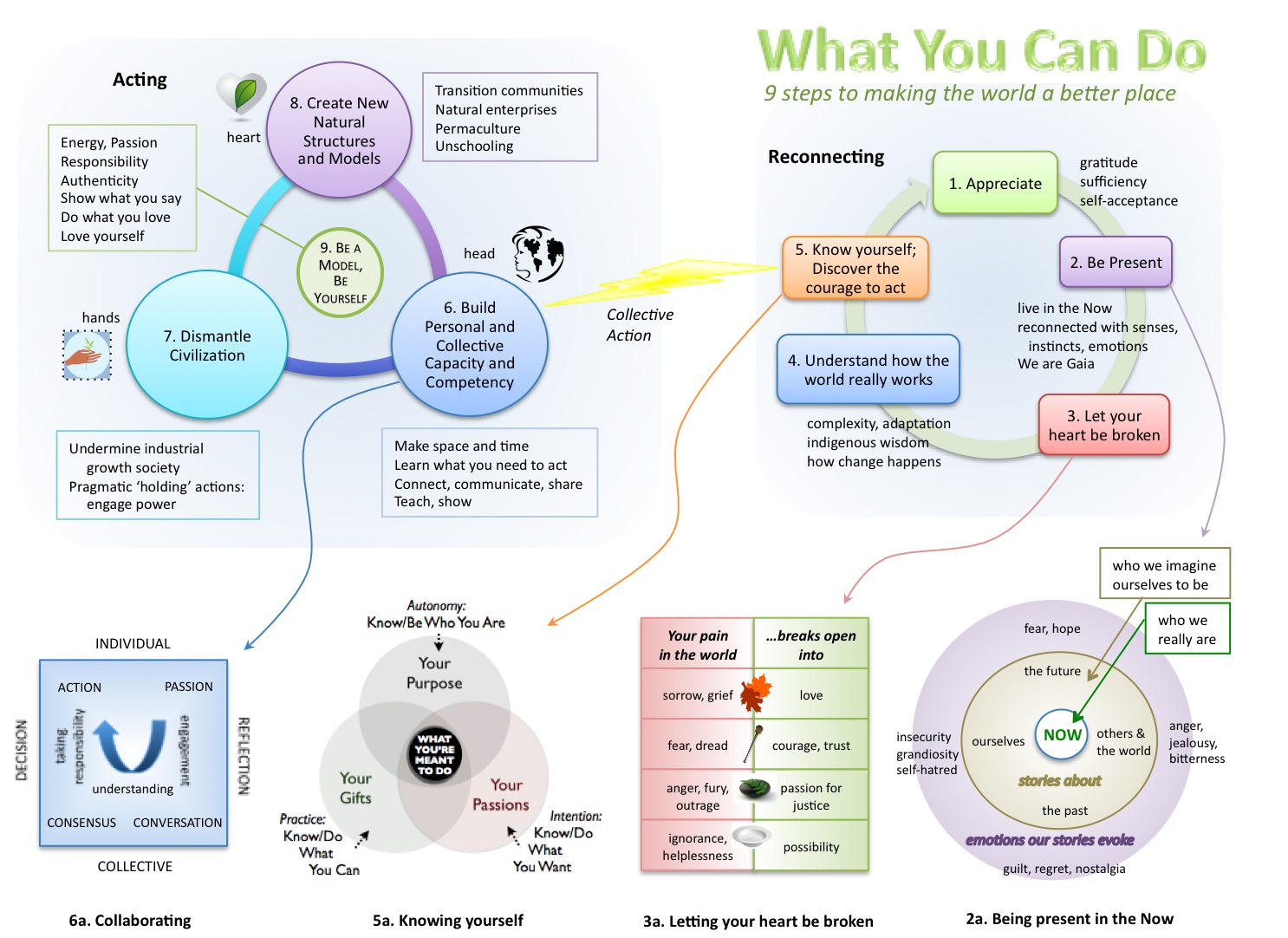 One aspect of this third set of practices that I’m hoping to focus on is what might be called ‘hacking massively complicated systems’.

Just to explain what I mean by ‘massively complicated’: while social and ecological systems are inherently complex — evolutionary, effective (but inefficient), and resilient — most of the political, economic and corporate systems that are driving our civilization off the edge of a cliff are, by contrast, complicated systems – efficient but dysfunctional, centralized, inflexible, and massive (mostly global).

Complicated systems are mostly man-made and somewhat mechanistic. They are built like a car engine (lots of parts, but a finite number, such that you can see cause and effect and can predict the results of an intervention). As a result, they are inherently fragile: they break down easily, and constantly, and they’re vulnerable to sabotage.

By contrast, complex systems, like ecosystems and communities, have an infinite number of variables, and it is virtually impossible to discern cause from effect, or to predict what the result of an intervention will be. As a result, complex systems are much harder to hack.

I have written before about how we might use Donella Meadows’ 12 Ways to Intervene in a System to hack massive complicated systems such as the Alberta Tar Sands, or the Industrial Agriculture system. By hacking, I mean disruptive intervention. I’m impatient with the tried-and-true methods of trying to confront The Man, which in my experience are mostly negative, ineffectual, blunt, directly confrontational, and oriented to try to change public opinion rather than directly disrupt what these systems are doing. Worse, they play to the advantages of the system we’re trying to undermine.

Why can’t we use the same ingenuity to hack these systems and reduce the damage they do, that was used by the architects to create these systems in the first place? For example, in fighting the Tar Sands, how might we hack the financial and reputational systems of Big Oil to undermine the credibility of their financial and assay data, to the point lenders would stop lending them the vast amounts of money they need for their horrific ‘development’?

I was fortunate to have the opportunity yesterday in California to speak to a very smart group (including some experienced and wily hackers) about this challenge – how do we hack these destructive systems to undermine them, to exploit their centralization and vulnerabilities, to bring them down? Here is what some of the group (besides reminding me about the value of Donella Meadows’ systems approach) told me:

What became very clear to me from this discussion was the need for those of us who want to make the world a better place to get a much sounder basic understanding of complexity theory and the challenges of bringing about change in complex versus complicated systems. As much as I love my friend Dave Snowden’s work in this area, it’s pretty dense reading, and something more basic and accessible is needed. One of the people in the group I was speaking with has written a book on complexity that I’m looking forward to reading.

So when I hold my Open Space sessions on hacking the Tar Sands and hacking Industrial Agriculture this Spring, I’ll need to ensure that participants have a grounding in social complexity theory before we start. And I’ll have to include some of this august group, who I thank for the opportunity for a first airing of my third set of intended practices.

The ultimate objective is to evolve a methodology that can can be used to hack any destructive complicated system.