No Room for Compassion 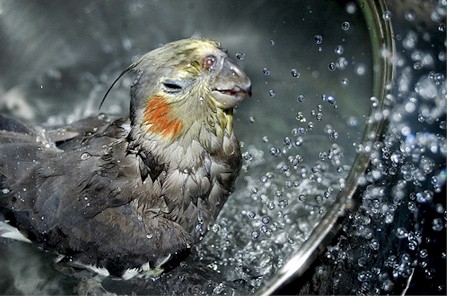 (photo from Kevin Cameron at Bastish)

I‘ve just finished reading a book that Tree gave me, called Birdology. It describes author Sy Montgomery’s experience with hens, pigeons, crows, hawks, parrots, hummingbirds and cassowaries. It’s an easy, fun read, but if you really want to know about the social life and intelligence of birds, you’d probably prefer Bernd Heinrich’s books (especially Mind of the Raven), and if you want to know more about animal emotions I’d steer you instead to Jeff Masson’s books (especially When Elephants Weep). Since I already knew that birds are very intelligent (some species more than others), and that they’re capable of complex emotions, I didn’t learn a lot from Birdology. But one idea, introduced in the first chapter (on hens) kept me reading.

That idea is that, while birds are remarkable intelligent and social, their emotional spectrum, while probably as deep as ours, is significantly different from ours. They exhibit impatience, anger, playfulness, joy, jealousy, contentedness, fear, frustration and affection, in ways any human would recognize. Some species (raptors) have an emotion that is, mercifully, relative rare in humans: It’s called yarak, and the closest human equivalent is probably blood-lust. Because they face so many risks, birds tend to be more intuitive and less reflective than humans, which makes sense from an evolutionary perspective: there just isn’t time to make most decisions thoughtfully. The instinctive ‘rage’-like quality of the yarak emotion has probably served hunting birds well. I wonder if this same instinctive emotion is what impels parents of many species (ours included) to attack predators with super-normal strength when their offspring are threatened. I think Darwin would agree.

It was another emotional difference described in the book, however, that really piqued my interest. The author charges that, while almost all species of birds can be very affectionate, many seem to be lacking in compassion. While they give their all for their offspring, and show strong bonding to both mates and community, they don’t seem to be deeply emotionally affected when one of their kind is suffering or killed. In fact, they will often turn on, and drive out, an injured member of the flock (the author speculates this is because the weak member is likely to attract predator attention and threaten the whole flock). And when they lose an offspring, their behaviour is initially intuitive, almost autonomic, but then seems largely indifferent. Given that the smarter species of birds have excellent memories, this is clearly not because the birds have forgotten their lost or killed children. What, then, accounts for this seemingly cold-blooded and ‘heartless’ behaviour?

The author does not speculate on this, but I will: My theory is that when you are a member of a ‘prey’ species, where your odds of dying young and the odds of your babies being eaten are high, compassion is too expensive an emotion to sustain. Grief is a debilitating emotion, and animals that exhibit it (elephants, whales, and humans, among others) become vulnerable to depression and incapacitation. It makes sense, then, that while compassion provides an evolutionary advantage to social animals by adding empathy and cohesion to the group, it is an evolutionary disadvantage to creatures that experience loss of loved ones regularly and at a high rate, since grief and compassion are, it appears, inseparable. So over millennia, compassion would be selected in creatures at low risk of frequent loss of loved ones, and selected out in creatures at high risk of such loss. The grief is just too much to bear, in every sense.

If this is true, it has some awesome implications. It may account for the different emotional ‘temperatures’ of dogs (canids) and cats (felines) in affluent countries, even though both types of animals are very affectionate and otherwise much like us in their emotional behaviour (cats have a much higher mortality rate). That might even account for some people being ‘dog’ people and others ‘cat’ people.

More importantly, it might explain why, when population pressures increase relative to available space and food, and result in high rates of mortality or threats to life and security, over time the species may become emotionally inured to suffering — less compassionate.

Some obvious questions stem from this:

We are, after all, animals. Why should we remain compassionate creatures if, at some point, the disadvantage of endless and unbearable grief exceeds the advantage of the social cohesion that compassion engenders?

And if we do become, like the birds and the insects (the creatures predicted to dominate on Earth after the sixth great extinction our behaviour has precipitated occurs), still smart, and still fierce, but also devoid of compassion, what does that mean for the Long Emergency we face in the decades to come? Do the ‘Mad Max’ dystopians have it right after all?

8 Responses to No Room for Compassion