Thank you, dear readers. I owe you so much, and I don’t say it enough. You’ve told me for years what I should do to make this blog better, and it’s only beginning to sink in. For years I wrote in the third person, as an ‘expert’; since you seemed to like my “how to … top 10” lists I thought that was what you wanted (My most read post ever remains “10 Things to Do When You’re Blue“). Or I wrote in the first person plural, the “royal we”. My posts were full of unequivocal “modal auxiliary verbs” (should, must, needs to) because everywhere, everyone I encountered seemed to be looking for answers, for (re-)assurance, for direction, for certainty. My self-assured posts attracted lots of readers, including people I’ve come to meet and love, and people who gave me my last two jobs, and people who published my book, and people who turned my ideas, deservedly, upside down. 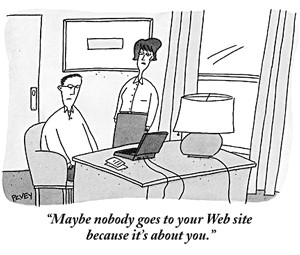 Cartoon from the New Yorker by PC Vey.

And when I started to become less certain, more conditional, proffering more questions than answers, writing more in the first person singular, my readership dropped off, and I worried that readers wouldn’t have the patience or the energy to put up with more meandering, introspective writing. When all along you were telling me that’s what you really wanted — authenticity, even when that entailed honest doubt, searching, second-guessing, admission of failure.

And that’s when I realized what this blog is really about, and why it doesn’t fit into any “blog categories”. Sure, as the subtitle says, it’s about understanding how the world really works and exploring models of a better way to live. But deeper than that, it’s a chronicle, now over seven years long, of my growing personal doubts about everything I had been told all my life, and, once I’d started to learn the real truth about this world, of my attempts to cope with that terrible truth. It’s my long-winded story about my transformation from someone who thought the world could be saved, to someone realizing it couldn’t be and didn’t have to be. And then asking myself, out loud: Now what?

So that’s where I am now, asking myself: What is my gift to the world? Now that I have, at last, the time and financial resources (and a little bit of understanding of what’s happening and what’s possible) to do anything I want to do, what should I do?

Perhaps that’s all any of us can do, if we really want to convey anything meaningful and durable and useful to others: tell our own story, as honestly as we can, and let others find resonance, perspective, understanding, ideas to explore, personal insight, hints, appreciation of what not to do, and why. Maybe even a few “ahas!” Everything we do in the real world falls apart, sooner or later. But those moments of magic connection we make sharing our stories with others endure, get adapted into their worldview, their imaginations, their work, their story, and then their story gets passed on to others and those magic connections multiply, again and again, in ways we’ll never know. In love, conversation, and community, stories are all we are.

So I have come full circle, and in trying to answer the Now what? question, I decided to go back to the three circles I introduced in my book Finding the Sweet Spot, at the intersection of which lies, as I optimistically told my readers, the answer to What We’re Meant to Do. Time to take some of my own medicine. So here I go again, thinking out loud, this time in the first person singular: Who needs my gift now? 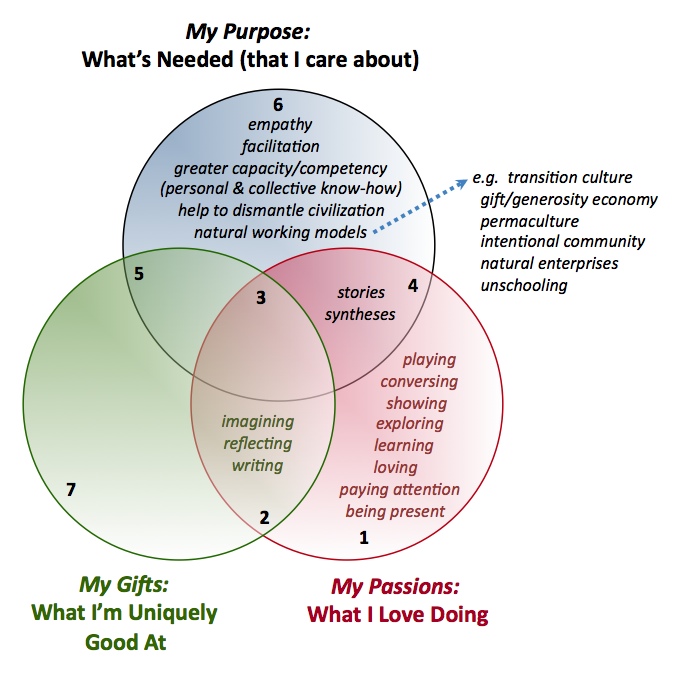 The three circles above are my evolving list of what I think, at least today, the world really needs (things it needs that I care about, anyway), and a list of the things I love doing, and the things I am (I think, or have been told I am) uniquely good at. I’ve left areas 5 and 7 empty, because there are a depressing number of things in area 5, and because I think the things I made a living doing in this area (and which many “professional” people continue to make a profitable living doing) are oversold (i.e. the perceived need for them is manufactured and hyped) and even exploitative. Besides, since I have no passion for these activities there’s no point dwelling on them.

The first two items in area 6 (what’s needed in the world) — the capacity for empathy and the skill of facilitation — are, I believe, probably the most important things to learn, to practice, and to teach, in the 21st century. If we don’t care about each other, and if we aren’t able to work effectively in partnership and collaboration, there is no hope for us. I am optimistic that at least some subcultures appreciate this and are working on it. But I don’t think I will ever acquire this capacity and this skill so long as I remain misanthropic and self-preoccupied. I just don’t care enough about most people, or about how they get along, or don’t get along, and so for me to focus my energies on this would be an exercise in S&M.

The third through fifth items in area 6 are from the “what you can do” model I adapted from Joanna Macy’s work. They are what I intended to do (I said last year) when I retired. The problem is, while I’m interested in learning new personal capacities, and studying how we might help to dismantle civilization, and learning about and imagining new models of a better way to live, I’m really not interested in doing the work of implementing, actually doing what the world needs done. I have no heart for detail, no courage for danger, and no patience for perseverance against relentless opposition and obstacles. I really love people who are, but I finally know myself enough to know that’s not me, and if I tried to tough out the slogging this work entails my lack of real passion will defeat me. If I’m going to stick with it, I have to do what I love.

So that takes me to the 13 activities in areas 1, 2 and 4. These are all things I love doing, and a couple of them in area 4 (good stories and syntheses) are needed in the world, while three of them in area 2 (imagining, reflecting and writing) are things that I’m uniquely good at (I think, or so I’m told). I’ve been asking myself two questions, to try to get some of the things in area 4 and 2 into the area 3 “sweet spot”:

I confess I was a bit shy about answering question 1, because although I’ve dabbled in studying lots of things over the past decade, I don’t think my practice has produced any new competencies — I give up too easily. So I focused more on the second question. But as I tried to connect the area 2 stuff and the area 6 stuff, I kept asking myself why, when I was so intellectually fascinated by the idea of a gift/generosity economy, by the transition movement and its amazing global traction, by the utter logic of unschooling, by the challenge of relearning the skills of consensus and growing our own food and living sustainably, by the excitement of actually stopping the abominable Alberta Tar Sands or the loathsome Industrial Agriculture system — was I so emotionally turned off at the idea of rolling up my sleeves and actually making some of these ideas work, and happen, in the real world? 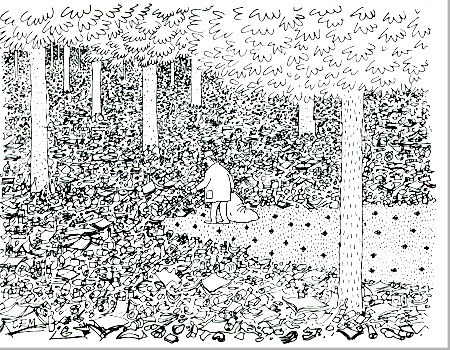 Cartoon from the New Yorker by the late Charles Elmer Martin

And it came to me that most of what the world needs right now, most of what we are all increasingly working at, however we make our life or our living, is cleaning up the mess we have already made and are continuing to make at an horrific rate. The mess of global warming. The BP oil spill. The deforestation of the rainforests. Failed states created by thugs we have armed in places we have invaded, ravaged, occupied and abandoned. Chronic diseases caused by messed up water, food, soil, and nutritionally starved bodies. Abuse of spouses, children and animals. Poverty. Crime (including that by unrepentant corporations and politicians). Energy-sucking, endemic despair. War. The desperation that leads to nihilistic violence. Genocide. Emotional trauma and its massive toll on our mental health. Cultural homogenization and the collapse of cultural and biological diversity. Giant messes, every one. Huge amounts of work to be done, and no assurance we will make a dent in cleaning up these “intractable” messes, or even that we can stop them getting worse. And there is nowhere (at least in the real world) to go to escape from it. There are no untouched frontiers left on our crowded, globally messy planet.

I can find no joy in cleaning up a mess that seems daily to get worse. No wonder I don’t want to pursue my ambitious 2009 intentions to be of service in providing the world what it needs. Who wants to clean up a massive, ever-growing mess? It’s no surprise that so many of us want, instead, to be designers, to work in the clean world of cyberspace, to be artists and musicians, where we can start with a “clean” slate, with no mess to clean up before we can begin with the fun work of creating, of re-creating, starting anew. (Oops, slipped back into the “royal we” again.)

My aversion to mess-cleaning is aggravated by the fact that I’m tired. I’ve put in a lot of years of well-intentioned, hard work, even though I will now acknowledge that most of it was wasted effort, and much of it supported the system that creates the monstrous messes. It’s diabolical how the system that makes you/us/ me part of the mess problem makes you/us/ me too exhausted to help clean it up. I don’t want to work that hard anymore. Maybe I’m selfish, but let someone else save the world for awhile.

And I see all the human psychological and physical damage this hopeless, endless, giant gaping maw of mess has created: The walking wounded, desperate and unloved and self-blaming and at a loss where to turn. The psychopaths, who perpetuate ever-widening cycles of violence. The broken people, who find escape in TV or alcohol or drugs or porn or anything mindless and emotion-dulling. Those in denial that there’s anything wrong — the technophiles and channel-switchers and turn-back-the-clock reactionaries.  And those too brainwashed or brain-dead or uninformed or living in some parallel universe I can’t even comprehend, to even realize what’s going on. And it just makes me angry at the whole human race. Dave, the misanthrope. I wasn’t always that way. And anyway, my loathing for most of the human race is just a self-deception, a cover, a diversion for my loathing of myself for my selfishness, my exhaustion, all the years I wasted… And then the grief sets in and I just want to escape too. Hide away on the hill in the forest where the mess cannot, if I squint and distract myself, be seen. Living in my sleep.

Tired. Feel like hibernating until it’s all over, and we can start again. Tomorrow I’ll look at the three circles with fresh eyes and see if I can come up with a better answer for What is my gift to the world? My guess is that I should stop thinking and get out and meet some people who aren’t tired and cynical, but who also aren’t naive, and see if I can learn from them. The hard part is finding people who care. Some romantic fool said that.

Thank you. We’ll be OK, really. That’s not a promise, it’s an intention. Sorta.

20 Responses to Going in Circles